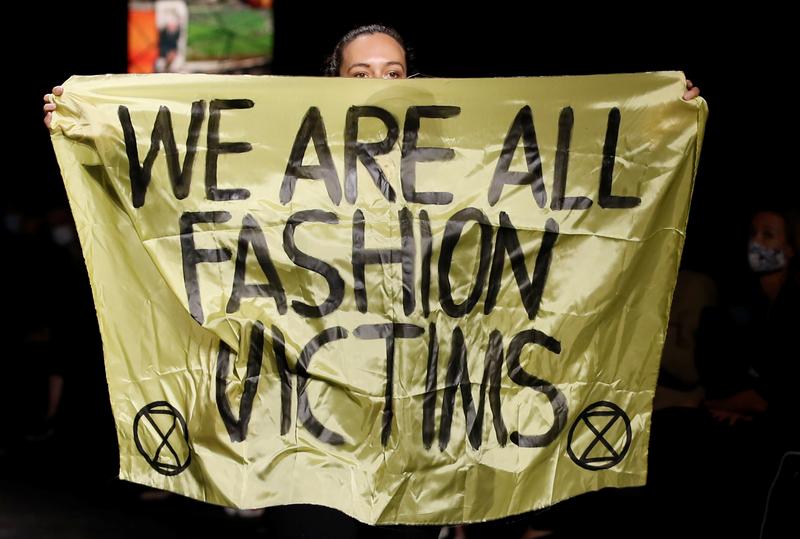 A woman holds a banner which reads “We are all fashion victims” as she walks on the catwalk during the Spring/Summer 2021 ready-to-wear collection show by designer Maria Grazia Chiuri for fashion house Dior during Paris Fashion Week in Paris, France, September 29, 2020. REUTERS/Benoit Tessier

PARIS (Reuters) – A woman holding a banner reading “We are all fashion victims” infiltrated the catwalk at Christian Dior’s show in Paris on Tuesday – walking the runway so calmly that it appeared at first to be part of the event.

The protester was acting in the name of Extinction Rebellion, an activist movement that aims to highlight the risks posed by climate change. The act was meant to denounce “the impact of the fashion industry on the environment and society”, a spokesman for the movement in France said.

Strolling past guests including “Game of Thrones” actress Maisie Williams and the billionaire boss of Dior parent LVMH Bernard Arnault in the front row, the woman walked towards photographers after models had exited the runway.

She left the scene without anyone challenging her and leaving some people confused over whether it was a stunt or part of the show.

Dior’s womenswear collections are designed by Maria Grazia Chiuri, who has often introduced logos into her collection as well as feminist statements on T-shirts and on set. Dior declined to comment further.

Extinction Rebellion, which has led protests at London’s Fashion Week since February 2019, started a campaign this week highlighting the waste generated by the industry.