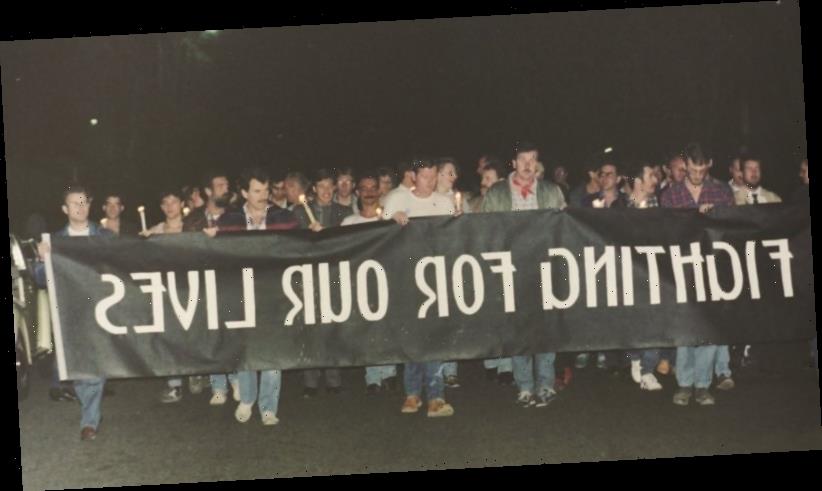 History
Fighting for Our Lives: The History of a Community Response to AIDS
Nick Cook
NewSouth, $39.95

By 1994, a phenomenon known as ‘‘AIDS fatigue’’ had set in among many in the only recently established Australian HIV sector. The work’s emotional toll was relentless; ‘‘grief suspension’’ tactics were common. ‘‘The train wreck that goes on forever’’ is how one peer-support-group member described it. It was still about two years before the arrival of the game-changing drug combination that, when and where they became available, transformed a positive diagnosis from a near-certain death sentence into a lifelong but manageable illness.

In HIV epicentres such as Sydney, those at the frontline of community care – campaigners, educators and especially those caring for people edging closer to death – had been living in a state of exception for well beyond a decade. Many of those lost were their own co-workers, friends, family and lovers. 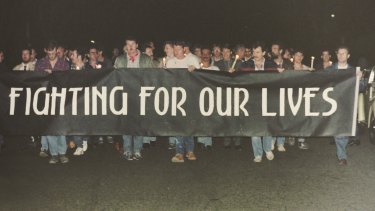 ‘‘The sheer scale of the devastation is difficult to properly comprehend,’’ writes Nick Cook in his history of the period, Fighting for Our Lives. People often reach for war metaphors, or natural disaster analogies, but sudden catastrophes such as bushfires aren’t quite apt as a comparison. The trauma and political volatility of the AIDS crisis years wrenched on and on, and for people living with HIV/AIDS, the progression of the disease itself was rarely swift. AIDS, Cook writes, ‘‘does not sneak up on a person, but instead wears them down over a number of years’’.

The plague years have been revisited considerable times in recent years, in books, exhibitions and on screen. Some commentators have even declared the history exhausted. 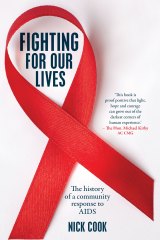 Fighting for Our Lives assembles a fresh local narrative that examines the formation and fortunes of the AIDS Council of NSW (ACON), a key community organisation that marks its 35th anniversary this year.

In essence, it’s an organisational history, pieced together from the council’s rich archive, queer community press from the period and interviews with surviving AIDS world figures.

But the ACON case study also tells a larger story about a country’s bold, creative, rapid innovations in modern public health, at the core of which was an unprecedented three-way collaboration between AIDS affected communities, medical fraternities and the state.

This celebrated ‘‘tripartite relationship’’ became the cornerstone of Australia’s much celebrated, world-leading HIV/AIDS response, and Fighting for Our Lives offers a straight-talking account of exactly how ‘‘buggers, druggies and prozzies’’ were able to shape effective AIDS policy.

For example, Australia is one of the few countries in the world that avoided an epidemic among injecting drug users. Neither has Australia reported a single confirmed case of HIV transmission from a female sex worker. These are, as Cook argues, some of our greatest public health triumphs. We invented daring, community-led safer sex campaigns that spoke frankly to people in their own sexual vernaculars, explaining how to f— safely in the midst of a sexual epidemic.

Even after AIDS fatigue set in by the mid-’90s (an exhaustion that, reading Cook’s history, feels palpable after 200-plus pages of battling stigma and hysteria, lobbying wildly recalcitrant senior health department officials, settling internecine community quarrels, and so on), Australian safer sex education remained at an innovative forefront. Campaigns acknowledging the emergent realities of ‘‘condom fatigue’’ and ‘‘negotiated safety’’, for example, broke with public health orthodoxies, but were shown to be sensible, effective at HIV prevention and stigma reducing. Many of these interventions are globally recognised. 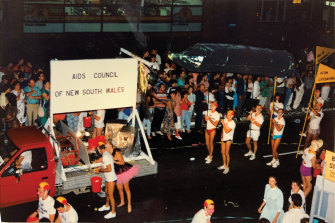 ACON helps to celebrate the 10th anniversary of Mardi Gras in 1987.Credit:Don Baxter

Media panic mongering and the wowserism of political reactionaries are recurring motifs in this history. Australia’s official response may have been exemplary, but our news outlets still ‘‘delighted in portraying gay men as a devastating threat to society’’. While children and straight people with HIV/AIDS became objects of national mourning, sex deviants, sex workers and drug users were folk devils.

AIDS was the first global pandemic of the media age, and any AIDS-related news, especially if it could involve prurient keyhole peeking at the depraved practices of junkies and sex deviants, was catnip for moralising and wildly stigmatising tabloid headlines, and such hysterical coverage has had both immediate and legacy impacts on community health. 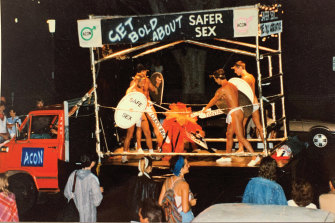 The high stakes of community organising and activism are another type of spectacle, and in Fighting for Our Lives all the dramatic elements are there: ACON’s ‘‘good-cop, bad-cop’’ relationship with militant activist group ACT-UP; tense alliances between the gay community and other groups on the margins; the fraught representation of women in the epidemic; ferocious lobbying of researchers and drug companies to fast-track new treatments; and on and on.

Such flashpoints and frictions occurred globally, and Cook is also careful to note the allure of high drama at the expense of the more mundane, bureaucratic accomplishments of battling an epidemic, and, to his credit, he chronicles both.

Local AIDS histories are also a pantheon of potent, charismatic and determined people. Certain famed contributors such as Labor health minister Neil Blewett, and Ita Buttrose in her role as chair of the National Advisory Committee on AIDS (NACAIDS) are widely recognised. Fighting for Our Lives pays tribute to lesser known but pivotal players – such as Norman Boyle, the early face of ACON, ‘‘flamboyantly arch, proudly camp and defiantly homosexual at a time when the vast majority of gay men remained closeted’’. Cook treats these figures reverently, but doesn’t spare us their missteps, misjudgements and the frequently harsh criticism they received.

‘‘One of the most harrowing aspects of researching this history,’’ he writes, ‘‘has been seeing page after page of young men’s faces in the Sydney Star Observer death notices.’’ This is another of the book’s motifs: a liturgy of death notifications, matter-of-factly recorded, indicating both the scale and the timeline of these deaths.

With the coverage of coronavirus presenting deadly echoes of the panicked and obstructive role the media played during the worst years of AIDS, we would do well to recognise the lessons of this history. Fighting for Our Lives is a well-timed reminder of the potential in this country to transcend a climate of hysteria and reactionary public policy in the co-ordination of humane, evidence-based public health initiatives, backed by medical and scientific experts, and delivered by and for the communities directly affected. Lest we forget.

Dion Kagan is a writer, editor, social researcher and the author of Positive Images: Gay Men and the Culture of ‘‘Post-Crisis’’ (Bloomsbury).