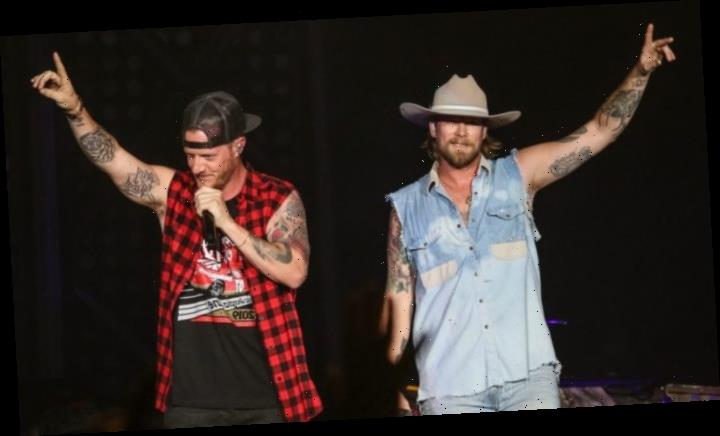 Before hitting the stage at Irvine’s FivePoint Amphitheater, Brian Kelley and Tyler Hubbard wandered backstage thinking they were there to greet friends, family and media at a VIP lounge decked out with Mexican nibbles and their Old Camp whiskey line in honor of the final night of the tour.

Instead, the duo was surprised by being presented with the award for Breakout Artist of the Decade, one of seven new ACM Decade Awards, which the Academy of Country Music recently announced.

The chart-toppers then received the Single of the Decade award for their 11-times platinum 2012 hit, “Cruise,” as well as the award for Music Event of the Decade for their wildly popular Bebe Rexha collaboration, “Meant to Be,” released in 2017.

Big Machine’s founder, president and CEO, Scott Borchetta, was at the presentation, alongside Scooter Braun, whose Ithaca Holdings acquired the label in June.

“Just getting to experience the passion of the fans — watching and feeling 25,000 people show up is pretty indescribable,” said Hubbard, whose daughter, Olivia Rose, beamed and applauded while posing for photos with the award afterwards. “So, enjoy that tonight. Soak it up, make yourself at home. Thank you so much for being a part of our career and our life and making our dreams come true. It feels incredible.”

The achievement comes during a year in which Florida Georgia Line released their fourth studio album, “Can’t Say I Ain’t Country,” in February; earned a Grammy nomination for “Meant to Be”; toured Australia and the U.S.; and announced they will return to Las Vegas with their second residency at Planet Hollywood’s Zappos Theater in November. They are also set to join Kenny Chesney on the road next summer for his Chillaxification 2020 Tour.

At the Irvine show, the two also made the most of their opening acts, bringing Dylan Schneider out to play guitar on “Y’All Boys” and getting Canaan Smith to help them perform “Get Your Shine On.” With Hubbard getting behind the piano, the pair also had crowd favorites Dan + Shay join them for “H.O.L.Y.” Joking that he might lead an hour-long church session next, Hubbard ended the 2016 hit by asking the crowd to raise one hand in the air while singing the chorus one last time.

Kelley and Hubbard took swigs of their Old Camp Peach Pecan whiskey after declaring, “I need a shot” — following a performance of “Blessings,” during which sweet family photos were shown on the screens. As part of the encore, they served up “Meant to Be,” with Rexha performing her vocals via the music video. “Thank you all for changing our life with that song right there,” they added afterwards, before closing out the show with “This Is How We Roll” and bidding fans goodbye until next summer.