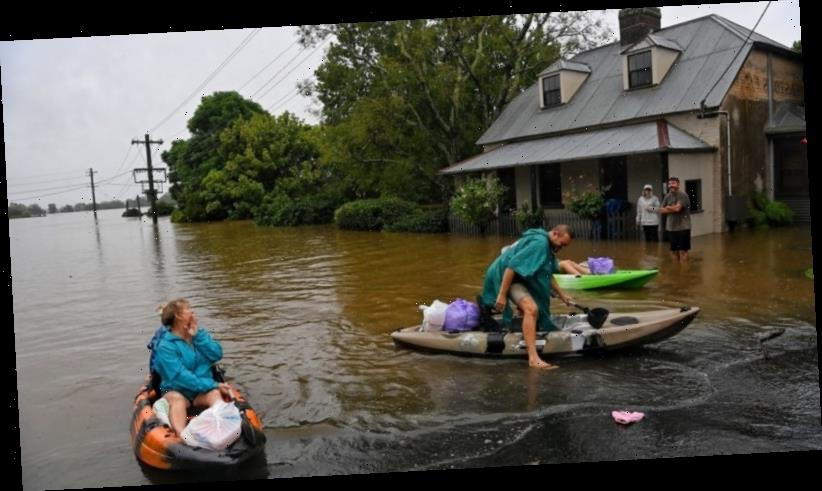 Meteorologists knew this week’s deluge soaking eastern Australia would be a big event but it was the scale and its persistence that was harder to tell. Predicting how climate change will juice the system up further is even trickier to forecast.

Ben Domensino, a senior Weatherzone meteorologist, said the six days of rain over eastern NSW have “been an amazing event to watch unfold”. 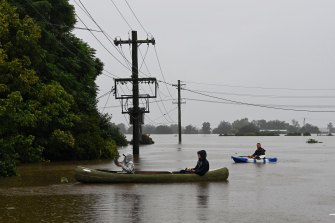 Residents check inundated homes in Windsor as the Hawkesbury River continues to rise on Monday.Credit:Nick Moir

Forecasters knew for days that an interaction of two big systems – a low-pressure trough off the coast and then a big cloud band streaming in from north-western Australia – would dump a lot of moisture.

It was more difficult to tell precisely where the rainfall would fall, for how long, and what the consequences would be when it did.

“It’s very hard to accurately predict exact rainfall events in each catchment,” Mr Domensino said, adding that even then, flooding would still depend on which part of the catchment it fell and how wet the area was before the rain arrived.

Rainfall totals are nearing 900 millimetres in parts of the Mid North Coast of NSW, while Kempsey Airport in the north had collected 618.4 millimetres in the four days to 9am on Monday, Mr Domensino said.

The four-day total for Kempsey is likely to be more than the previous March for the whole month, he said.

The low-pressure trough off the coast has been drawing in moist tropical air from the Tasman and Coral Seas into NSW. That moisture has hit cool air brought north from the Southern Ocean, triggering the instability.

Monday and Tuesday’s rain, though, will be drawn in part from the moisture streaming in from the north-west. That rain will fall largely over inland areas, such as Walgett, bringing the potential for some flooding there.

A crucial component has been a “very stubborn” high-pressure system in the southern Tasman Sea that has kept the onshore winds blowing into NSW. “By Thursday, this high-pressure system will move to the east of New Zealand and finally break down this long-lasting weather pattern over eastern Australia,” Mr Domensino said.

Todd Lane, an atmospheric scientist at the University of Melbourne and deputy director of the Australian Research Council’s Centre of Excellence for Climate Extremes, said the week’s rain was “certainly a common set-up” for extreme rainfall over eastern Australia.

While it would take careful research to identify what if any role climate change had played in the event, Professor Lane said “we do know that in a warming world, the atmosphere can hold more moisture”.

The standard estimate is for each degree the atmosphere heats up, it can hold about 7 per cent more moisture.

What’s not clear, though, is how the weather systems that dump that extra moisture are changing and will change in the future.

“How will the weather change with climate change?” Professor Lane said. “It’s a really active area of research.”

Still, “these are the kinds of events that really tests our resilience and that of our communities,” he said. “Even if [such events] don’t become more frequent, they are expected to become more extreme and severe”.

Climate models, for instance, are much better at picking how extreme heat events are becoming more frequent, more extreme and last longer, than how rainfall events are shifting.

Andrew Gissing, general manager at the consultancy Risk Frontiers, said if the weather systems can be hard to forecast, where the impacts might be greatest is less challenging.

The unique geography of the Hawkesbury-Nepean with so many catchments emptying into it means it has among the highest risks of flooding in Australia. The concentration of population and related infrastructure also mean the damage from big events could run into the billions of dollars and affect other parts of Sydney.

“It has the potential to be so devastating when [the flooding] gets big,” Mr Gissing said, adding “the risk is only growing” as the planet warms.

One of the big threats will come if people don’t heed warnings to evacuate. If 90 per cent go but 10 per cent remain, thousands of people could be at risk, he said.

Andrew King, another climate researcher at the University of Melbourne who has studied major rainfall events over south-eastern Australia, said it was likely the effect of the La Nina weather pattern in the Pacific “was dominating over climate change” for the present event.

At this stage, researchers are also not picking up big trends in the rainfall of multi-day events from climate change, although the severity of shorter terms events such as thunderstorms was showing some shift with warmer temperatures, Dr King said.