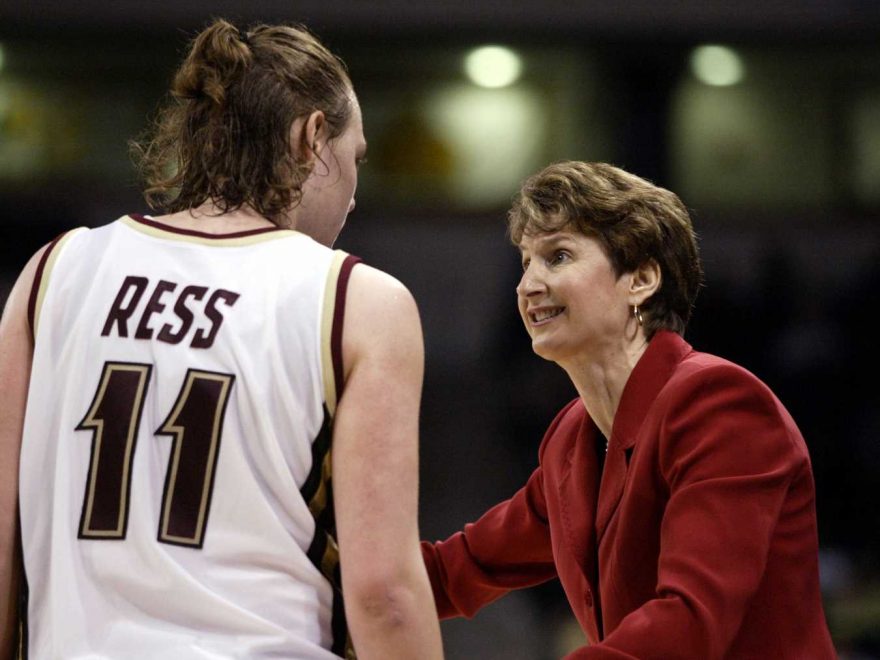 Cathy Inglese, the former famed Boston College women’s basketball coach, died on Wednesday due to complications after experiencing a traumatic brain injury a week before. She was 60.

News of her death was shared by Inglese’s sister Nancy, in a statement on Facebook.

“We will miss Cathy sooo very much,” Nancy wrote, adding that her note was on behalf of the entire Inglese family. “Our thanks go out to everyone for their unbelievable love and support. Cathy’s legacy lives on!!”

Inglese, who grew up in Connecticut, began her career in basketball as a player — leading her team at Sheehan High School to a basketball state title victory in 1976. From there, Inglese played on a college level, at Southern Connecticut State University — where she graduated in 1980.

She spent 27 years as a head coach in women’s college basketball, working across a number of institutions.

The bulk of that time was at Boston College, where she coached from 1993-2008 — leading the Eagles to seven NCAA Tournament appearances, three Sweet 16 placements, and the team’s only Big East Tournament championship in 2004 (They’re still the only team in the history of the Big East to nab the title by winning games on four straight days, the Associated Press reports).

Before her time at Boston College, Inglese worked as the head coach at the University of Vermont from 1986 to 1993. She found success there too, leading the Catamounts to consecutive undefeated regular seasons in 1992 and 1993.

After Boston College, she went on to coach at University of Rhode Island from 2009 to 2014. She was hired, just last month, as an assistant coach at Hofstra University.

Many of Inglese’s former colleagues and employers remembered her fondly on Wednesday.

“It’s such a sad day for our Boston College community with Cathy’s passing,” Martin Jarmon, Boston College’s director of athletics, said in a statement on the school’s website. “Cathy had a tremendously positive influence on the student-athletes she coached at BC and led our program to championship heights. Our thoughts and prayers go out to her family and friends.”

“Our hearts are filled with sadness,” Boston College women’s basketball head coach Joanna Bernabei-McNamee added. “Cathy was so well respected in our coaching community for not only her basketball IQ but the way she treated others. From everyone associated with our BC women’s basketball program, we send all of our thoughts and prayers to Cathy’s family and loved ones.”

“Our hearts are hurting with the passing of Cathy,” she shared in a statement on Hofstra’s website. “Cathy was one of the kindest and nicest people I have come to know in the coaching industry and in her short time with our program she left an indelible mark. Our entire program and the Hofstra family are heartbroken that she has passed but her memory will continue to influence our program every day we step on the court. Please join us in sending our thoughts and prayers to her family. Cathy lived a wonderful life and personally I am honored to have been able to call her a friend, colleague, co-worker and mentor.”

“The entire Hofstra community is devastated with the passing of Cathy,” Hofstra Director of Athletics Rick Cole Jr. said. “Cathy was an amazing person and coach and although part of our family for a short time she had already left a tremendous impact. Those who knew Cathy were touched by her kindness and generosity and her mark on the world of college athletics is immense. Our thoughts and prayers are with the Inglese family and we join everyone in mourning the passing of an incredible person who touched so many lives.”