Twitter users are delighting in some very contentious drama taking place in a Facebook group… about Crock-Pot cooking.

The group appears to be for home cooks to share their favorite tips, tricks, and recipes for using Crock-Pots — but while slow-cookers are all about keeping the cooking temperature low, some members of the group seem to be a bit hot-headed.

The brouhaha recently reached a boiling point when one of the group’s moderators went on rant about ‘rude and condescending’ members who considered themselves ‘crockpot masters’ who were too good to help others — and asked them to butt out and leave if they couldn’t play nice. All the drama! Twitter users are delighting in some very contentious drama taking place in a Facebook group… about Crock-Pot cooking 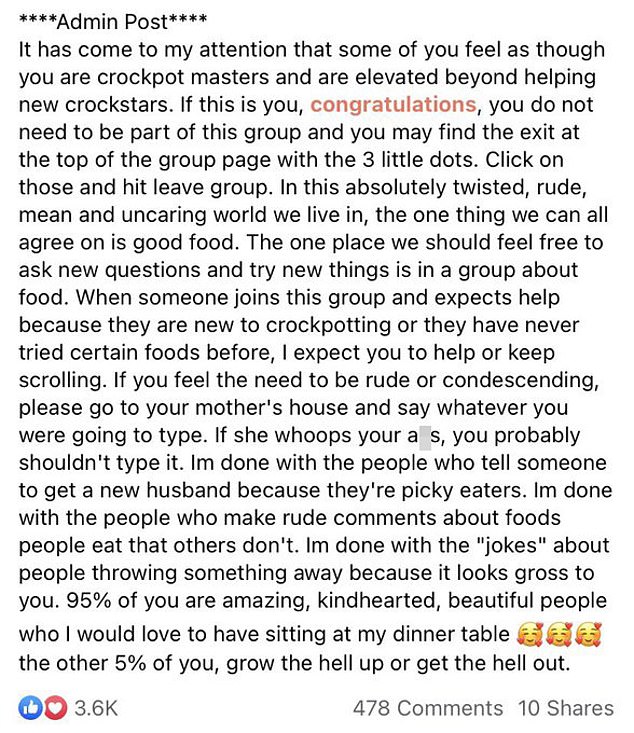 Chill! One of the group’s moderators went on rant about ‘rude and condescending’ members who considered themselves ‘crockpot masters’ who were too good to help others

Sarah Hollowell from Indiana captured the moderator’s rant and shared it on Twitter last week.

In it, the moderator wrote: ‘It has come to my attention that some of you feel as thought you are crockpot masters and are elevated beyond helping new crockstars.

‘If this is you, congratulations, you do not need to be part of this group and you may find the exit at the top of the group page with the 3 little dots. Click on those and hit “leave the group.”

‘In this absolutely twisted, rude, mean and uncaring world we live in, the one thing we can all agree on is good food. The one place we should feel free to ask new questions and try new things is in a group about food.

‘When someone joins this group and expects help because they are new to crockpotting or they have never tried certain foods before, I expect you to help or keep scrolling.

‘If you feel the need to be rude or condescending, please go to your mother’s house and say whatever you were going to type. If she whoops your a**, you probably shouldn’t type it.

‘I’m done with the “jokes” about people throwing something away because it looks gross to you. 95% of you are amazing, kindhearted, beautiful people who I would love to have sitting at my dinner table.

‘The other 5% of you, grow the hell up or get the hell out,’ the mod concluded.

Sarah, who was captivated by the drama, went on to say that she ‘100% agrees’ with the moderator, but this wasn’t ‘what I expected to see on my newsfeed from a crock pot group.’

‘I DID find the thread that I think prompted this,’ she went on, ‘which was someone requesting advice for meal planning with a husband who’s a picky eater. There are hundreds of comments and I haven’t found bad ones yet (if they still exist) but the nice ones are kinda heartwarming tbh. 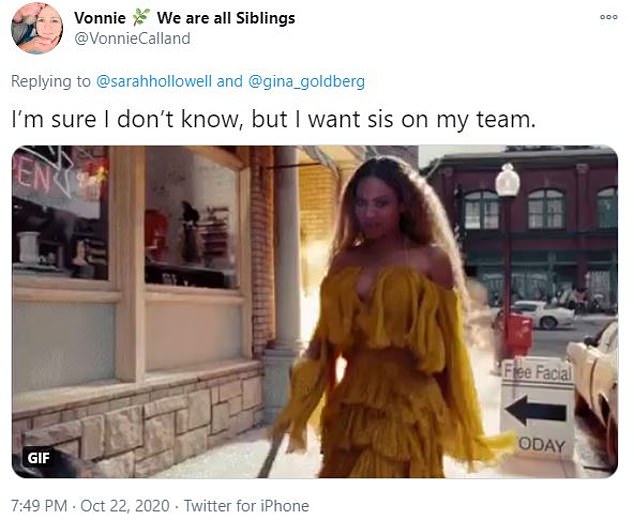 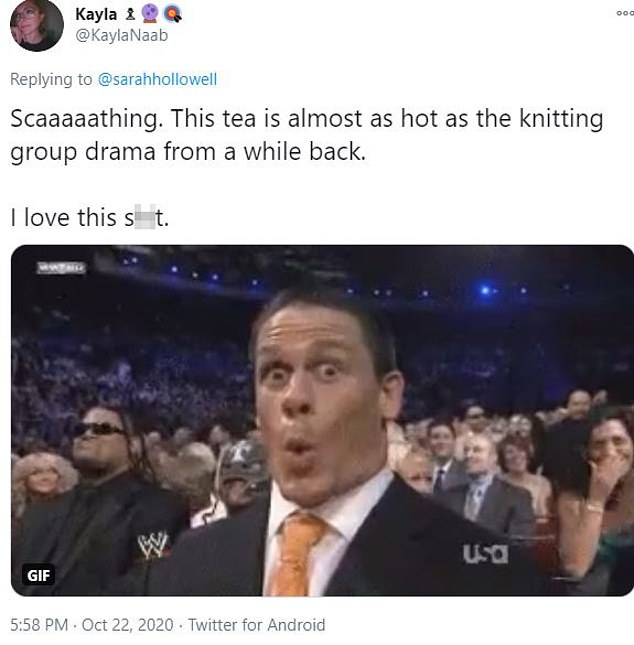 ‘I’ll be honest I completely glazed over “crockstars” when I read it but yes we do need to discuss that,’ she added.

‘I swear the best Internet drama turns up in the most innocent sounding groups,’ wrote one.

‘Scaaaaathing. This tea is almost as hot as the knitting group drama from a while back,’ said another.

One more said that ‘all kinds of crocknanigans [are] goin’ on in there,’ while yet another wondered, ‘I can’t imagine what happens when Instapot comes up.’