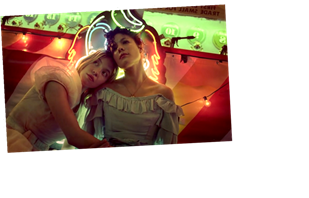 Halsey is about to make her acting debut, and it will be alongside a Euphoria fave. The singer will star in the upcoming show with Sydney Sweeney, and it already sounds like the series will be everyone’s next teen drama obsession. So, here’s what fans should know about Halsey and Sydney Sweeney’s TV show The Player’s Table, a twist-filled prep school murder mystery based on the 2020 novel They Wish They Were Us.

According to The Hollywood Reporter, Sweeney discovered the YA book by Jessica Goodman and sent it to Halsey, hoping the two friends could work together on a television adaptation. Both stars will act in and produce the show, which has yet to land at a network.

While Halsey has shown off some acting skills in her music videos and on Saturday Night Live, this upcoming series will be her official acting debut. It may be a new territory for the singer, but at least she will have a familiar face by her side; Halsey and Sweeney previously costarred in Halsey’s 2019 music video for "Graveyard."

The Player’s Table will revolve around Sweeney’s character Jill Newman, a senior at an elite Long Island high school who investigates the mysterious death of her friend Shaila three years prior. Halsey will play Rachel Calloway, the older sister of the person accused of Shaila’s murder, who will team up with Jill to find out the truth. Given its elite prep school setting and twist-y drama, Goodman’s novel has drawn comparisons to Gossip Girl, another YA book that was adapted into a beloved series.

As in the book, the show will center on a high school clique known as the Players, who are all members of a secret society that rule the school. Jill is a member of this group, as Rachel also was when she attended Gold Coast Prep. The two women will navigate the group’s secrets in order to figure out the truth about Shaila’s death and clear the name of Rachel’s younger brother Graham before he turns 18.

The Player’s Table is still in early development, so fans will have to wait a while for the show to air.