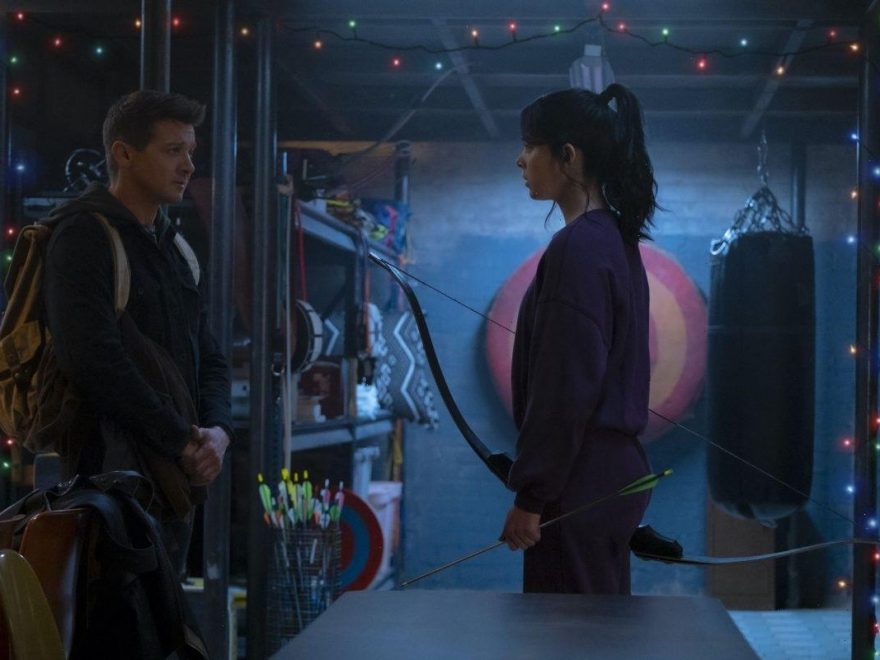 What better way to get in the holiday spirit than to watch Marvel’s newest Disney+ show, Hawkeye? The show takes place during Christmastime in New York City, and according to the powers that be at Marvel, Hawkeye is meant to feel like a holiday classic.

The synopsis for Marvel’s Hawkeye reads, “While in New York City post-Blip, Clint Barton must work together with the young archer Kate Bishop to confront enemies from his past as Ronin in order to get back to his family in time for Christmas.”

As an Avenger (former Avenger?), Clint leads a very hectic life. While we aren’t sure exactly what he has been up to in the two years since the event of Avengers: Endgame, we know that Clint hasn’t spent Christmas with his family in a while. So, he’s determined to do so in Hawkeye. Clint even promised his daughter that he would make it home in time for Christmas.

So, the holidays are very much ingrained in the fabric of the show. And, according to one of the series’ directors, some of the most iconic holiday movies directly inspired Hawkeye.

Which holiday movies inspired the series?

ComicBook.com interviewed Hawkeye director Rhys Thomas about the Marvel Disney+ series and what it drew inspiration from.

“People mentioned Die Hard being one side of things, but yeah. I mean, Home Alone is definitely a big atmospheric Christmas touchstone … both the original and Lost In New York,” Thomas said. “Yeah, I don’t know. Like I, kind of, again, I would just do, I mean, Gremlins as well. It’s like … I’m the type of person that sort of whether a direct reference makes it into a show or a movie or not, I will take any excuse to sort of keep plumbing my memory, my cultural memory.”

While some may argue over whether or not Die Hard and Gremlins are Christmas movies, both Home Alone films are grounded in the holidays. And just by watching the first couple of episodes of Hawkeye, it’s clear that the Marvel show used all of these films to influence its setting and story.

While on the red carpet for the premiere of Hawkeye, Entertainment Tonight interviewed Marvel Studios president Kevin Feige.

When asked if Hawkeye will be a necessary watch during the holidays for years to come, Feige responded, “I hope so. It’s fun. We’ve always wanted to do a story [at Christmas]. We had a little bit in Iron Man 3 that was our Christmas story — nobody really looks at it as a [Christmas story], we sort of consider that a Christmas movie. But this, unabashedly, is a holiday story.”

“I love the idea of it being a perennial that people can check out every holiday season. I love that it’s debuting just before Thanksgiving. It concludes just before Christmas,” Feige continued. “For the first time, you get a title Avenger on Disney+, which is great. Jeremy Renner, of course, is the best, and he’s the reason to do it. Thankfully, Hailee [Steinfeld] wanted to work with him, so we got her to play Kate Bishop, and it’s that pairing that I think is gonna make for very happy holidays.”