A month after their new album topped the charts, the Rubens were busking in Melbourne’s Bourke Street Mall with an impromptu performance they dedicated to Michael Gudinski.

Gudinski, who died on Monday night at his Melbourne home, aged 68, was hugely supportive of the NSW-based five-piece band. 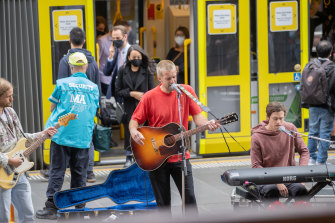 The Rubens busking in Bourke Street mall on Friday.Credit:Simon Schluter

Singer Sam Margin summed up in his own succinct way: a “f—ing legend”.

The Rubens’ Friday afternoon pop-up gigs at Bourke Street and Evans Walker Bridge were part of an ongoing series of concerts backed by Melbourne City Council and Gudinski’s Mushroom Group and to re-invigorate the city after pandemic induced shutdowns of 2020.

A heart-shaped floral wreath displayed in the Bourke Street thoroughfare was a subtle token for the man who backed the Rubens from the start of their mainstream careers.

“It’s for our boy Michael Gudinski who passed away this last week. He put these [pop-up] shows on and he changed your city,” a visibly emotional Margin told the small group that gathered to hear acoustic versions of Thank You, Lay It Down, Masterpiece and Hoops.

Gudinski predicted the Rubens’ early single My Gun would be a hit. As well as being nominated in 2012’s ARIA Awards My Gun also finished inside the top 10 of 2012’s Triple J Hottest 100. Three years later the group took out top spot in the annual countdown with Hoops.

Soon after joining forces with Gudinski 10 years ago, the Rubens were recording their debut album in New York. It was a meteoric rise.

According to Sam Margin, Gudinski loved the Rubens swaggering alt-rock style but also their lyrics. 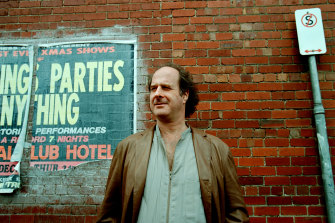 “He always had favourites on each album,” Margin told The Age. “I remember him calling me about [the song] Million Man shouting a bunch of lyrics down the phone at me.”

“I’d get this big pick me up whenever my phone rang and the screen said ‘MG’,” he said. “We’d have an amazing little chat and then be pumped up for whatever was after it”.

Friday’s afternoon busking session was a poignant, pared-back tribute to Gudinski after a bruising week for the industry.

“It was a pretty shitty week … and I think just being able to come to Melbourne for the first time in over a year, it’s cathartic,” said Margin.

Dozens of artists paid tribute to Gudinski this week, including Kylie Minogue and Bruce Springstein.

Margin said his lasting memory of Gudinski was as someone who was authentic to his core.

“He meant that in a traditional sense but he also meant that in a way that often gets used in this industry but not with the weight that Michael did – he cared about every artist on his roster – that was really like family,”