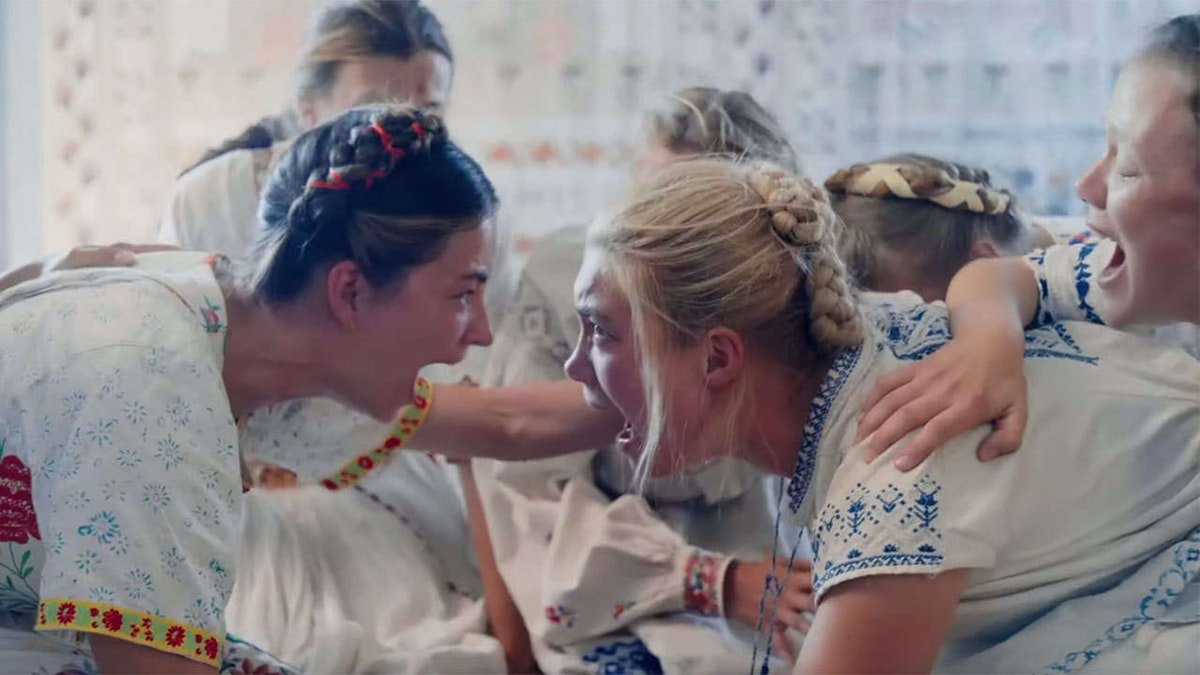 It’s the sharp jab punctuating Midsommar‘s eerily sunny trailer — a forceful exhalation that catches your ear throughout the increasingly ominous solstice celebration. Characters create the harsh-sounding huff, a clipped "HOH", in tandem, staring into each other’s eyes. The trailer tries to set up these expressive sounds as the Midsommar equivalent of Hereditary‘s haunting tongue click, another terrifying aural oral sound effect used to terrifying effect in a film by Ari Aster. But what’s up with the breathing in Midsommar, and how does it tie in to the film’s scares? Midsommar spoilers ahead.

The first event is an Ättestupa ceremony. An older pair sitting in the feast’s place of honor solemnly face each other and start the film’s first breathing ritual – staring into each other’s eyes, they exhale several sharp breaths together before sitting down and eating in perfect synchronicity. After the meal, high up on a cliff, again, they coordinate sharp breaths. This time it’s prelude to suicide, as each leaps off the cliff to their death. That’s when we hear the film’s other form of sympathetic breathing — as the Hårga groan along with the elder who somehow survived the fall, a form of vocal hysterical contagion as his pain sets them all off.

Hereditary‘s clicking noise was far more direct, a distinct audio tic tied to a specific character. One of the film’s biggest scares is when it crops up unexpectedly after that character dies, and at close enough range it sounds right in our ears. In contrast, the breath in Midsommar only appears after the solstice festivities begin on the isolated northern Hårga commune, and always diagetically, coming from people onscreen. Speaking with Bustle, Aster notes the same, explaining the breathing is "just like a form of punctuation for [the Hårga]. It’s funny, because in the trailer, it’s used in the same [as] the click was being used for Hereditary and that’s not what I was thinking… For me, it was just a way of kind of giving a little more color to their language."

This kind of ritualistic breathing has been common throughout human history. Like the Maori haka, a synchronized tribal dance, ritualistic breathing was often used to get people hyped for competitions or events, whether it was war or sports. In other cultures, it’s used to induce a trance. Insufflation and exsufflation (breathing in and out) were thought to exorcise evil and were formally part of Catholic ceremonies through Vatican II, yogic pranayama‘s been around for centuries, and it’s theorized that some ancient Greek religious rites used breathwork. One modern variant is the way slow breaths in a specific cadence are used to lull a participant into a hypnotic state. Midsommar‘s rituals include both, with a heaping helping of psychedelic plants to further induce altered states.

Drugs aren’t necessary though. After the reclassification of LSD left pioneering research psychiatrist Stanislav Grof unable to use the drug for patient treatment, he discovered you could trip pretty hard with just breath alone. He developed a technique called holotropic breathwork, where deep, fast breathing is used to induce an altered state of consciousness. It’s essentially induced, guided hyperventilation, though a 2013 study showed significant reduced anxiety for those who practiced it alongside therapy compared to those who attended therapy alone.

Some actors also use breath and breathing to induce emotional states and put themselves into the headspace of their character. In an article titled "Breathing Is Meaning", internationally renowned voice teacher Catherine Fitzmaurice explains:

That’s not just theory – several studies have shown breathing alone can bring about psychological and physical unity, for individuals and groups. It goes the other way as well — a 2011 study of a Spanish midsummer fire walking ritual showed watching the action actually synchronized the breath between participants and spectators. Ever been told to "take a deep breath" before reacting to something? Quartzy reports that it’s not just a turn of phrase — observations of brain activity in conscious human subjects shows the physical act of breathing can actually affect different parts of your mind.

Throughout Midsommar, there’s another type of breathing that repeatedly crops up: Everyone’s constantly singing. Aster notes, "We worked with a choral composer named Jessika Kenney, who’s really brilliant… all the songs the Hårgas sing, that comes from her." Again, not a coincidence — a Nordic project called The Sound Of Well-Being found that participating in a choir significantly boosted workplace involvement and psychosocial well-being, more so than just social activities like group sports. The Hårga use breath to reinforce their insular group, to synchronize individuals, and to connect to outsiders like Dani. (Kenney also developed the sound of the "punctuation" breaths, Aster says.)

Late in the film, Dani’s emotional dam finally bursts and she begins howling in pain. In fact, Dani wailing and crying is the film’s signature image, dominating posters. What those images don’t show is the reciprocity. Her May Queen handmaidens begin wailing in time with her, turning individual uncontrollable sobbing into a group breathing exercise.

The harsh "HOH" doesn’t reappear, but it doesn’t need to. Dani’s already become synchronized with a group whose very breathing unites them.