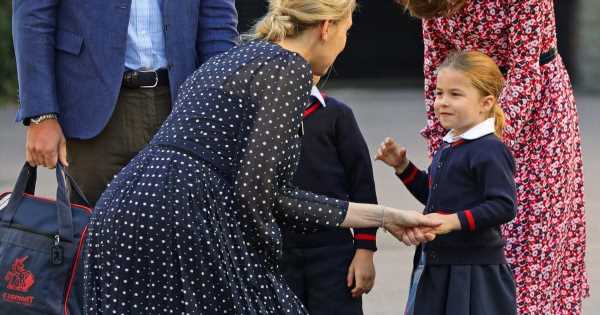 Just like every other parent across Britain, Kate Middleton and Prince William are preparing for their youngsters' return to school this September.

The Cambridges have enjoyed a fun-filled summer holiday, with trips to the Isles of Scilly and the Queen's Balmoral Estate creating lifelong memories for Prince George, Princess Charlotte and Prince Louis.

The Duke and Duchess' youngest son Louis is three years old and started at nursery school this April, while his older siblings Charlotte, six, and George eight, are heading into year two and year four.

Kate, 39, is known for her "hands-on" approach when it comes to parenting her youngsters and has already started the preparations for the start of the new school year.

A royal source recently revealed: "Because of who they are, William and Kate have had to be highly organised parents.

“But as parents, Wills and Kate have developed this brilliant knack of letting as much as they can seem spontaneous and that’s how the children see it.”

Making sure the kids are well-mannered

The source, who is close to the Royal Family revealed that Kate in particular is very strict about the kids having good manners.

They explained: “Table manners, thank you letters, little courtesies are being drilled into the children so they become automatic.

“If George has been naughty, and he has been on occasion, Kate and William are good at explaining to him the rights and wrongs of what’s happened”.

Drinks at the pub with other mums

Just like any other parent, Kate loves mingling with other parents from the kids' schools and is “keen on supportive networks”.

She loves to maintain good relationships with both the other mums and school staff.

The source added: “She comes from a supportive family so she’s very keen on family networks and networks of friends and organisations.

“As parents they are also very good at rolling up their sleeves and helping out with school events; sports days, fundraisers and that sort of thing.

“No-one ever jumps the queue for anything. They just try to fit in.

“Kate and William are also very, very supportive of the staff.”

In the past, Kate has even been known to join drinks with other mums from the school at the pub.

Like many parents, Kate’s kids will need to make sure they are kitted out in correctly-fitting uniforms for their lessons.

Charlotte and George both attend the £17k-a-year Thomas’s Battersea, which has a smart navy uniform.

Meanwhile, Louis goes to Willcocks Nursery School, and it is likely he will join his brother and sister's school in September 2022 at the age of four.

The insider continued: “George has grown quite a lot over the summer and so a new order will likely go into Perry’s, the Knightsbridge school outfitters, for some larger items as he’s gone up a size.”

Encouraging friends coming over after school

The source added that “all the children are popular at school and have lots of friends, in London and also near Anmer.”

They added: “There’s never a shortage of friends around for tea. Kate and William insist on no special treatment for any of them.

“George might be a future king but for now he’s just another little boy.

“They are always at great pains to make sure the three of them have as normal a childhood as possible.”

In order to keep George, Charlotte and Louis creative, Kate is said to be “encouraging both George and Charlotte to write, sketch, photograph and paint weekly journals.”

The source added that these are “admired and encouraged by Prince Charles and the Middleton family.”

Meanwhile, the kids get up to lots of cooking in the kitchen.

According to the insider: “New skills are constantly being learnt, lots of cooking being done by all the three children, followed by lots of mess and much laughter.”

When Kate was making food for a Commonwealth Big Lunch at St Luke's Community Centre in 2018, she said: “I've done that with George and Charlotte—making pizza dough.

“They love it because they can get their hands messy."

Codenames instead of royal titles

Prince George’s full title is His Royal Highness Prince George of Cambridge – but this isn't how he is known at school.

For schooling purposes, as the royal family don't have a traditional last name, the youngster goes by George Cambridge.

Princess Charlotte is also known without her title as “Charlotte Cambridge”, making it much easier for the teachers to do registration in the morning!

For more juicy gossip on your favourite royals, sign up to our daily newsletter here