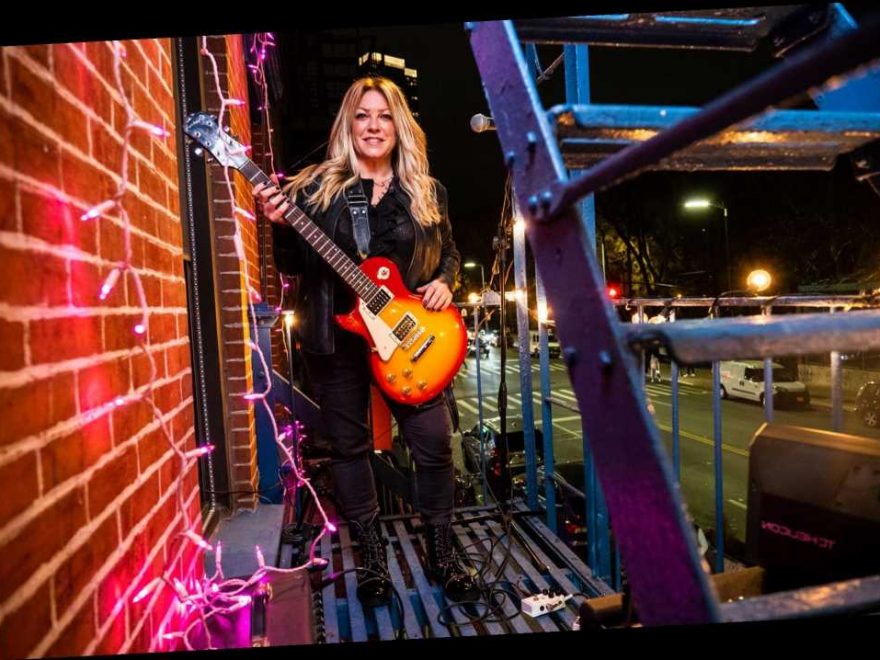 Just call it the stairway to heaven.

Jill Fiore, a guitarist who lives on the Lower East Side, is used to playing downtown venues such as the Bowery Electric and Berlin. But now that they’re shuttered, she’s scheduled gigs at an even more local spot: the fire escape of her second-floor apartment on Essex Street.

Last Saturday, she performed a concert for an audience of about 75 who gathered between Grand and Hester streets and sang along to her cover of “Dreams” by Fleetwood Mac. “It was a moment of connection amongst New Yorkers,” Fiore said.

She encouraged attendees to grab to-go drinks at the nearby bars and liquor stores like Delancey Wine, and requested they “please wear a mask or face covering.”

Fiore decided to start playing outside after contracting COVID-19 in late March and initially fearing she wouldn’t have the lung power to sing again.

“On Day 11 of my quarantine, I finally had the energy to crawl onto my fire escape — and had a feeling of relief,” said the 47-year-old. “I decided then to make my music my top priority.”

Although she had previously sang with the groups the Lovely and Ready Jane, Fiore was without a band at the time. “I had started to put a new band together before the pandemic hit,” she said, but she was forced to put that plan on pause until October.

That’s when her first fire-escape show (promoted as “The Fiore Escape”) attracted 50 or so concertgoers lining up along the fence of Seward Park, across the street from her apartment, to hear originals such as her most popular song, “Nobody Loves Me Like I Do,” and a cover of PJ Harvey’s “This Is Love.”

She wrangled bassist Jason Taylor, saxophonist Dave Spinley and a guitarist simply known as The Baron to join her fire-escape show, posing in the pink LED-lighted windows of her apartment and also the pad next door. “Neighbors were accommodating,” Fiore said.

When it came to roadies, Fiore gets by with a little help from her friends: Her microphone stand came from local LES haunt the Old Man Hustle comedy club, and nearby cafes lent her benches for passers-by to watch from, while the Flowers Cafe provided hand sanitizer for guests.

She also tapped a pal who does sound engineering to help amp up her acoustics.

Fiore’s not yet sure when her next show will be, but is eager to play another before the winter freeze sets in. The singer is also already planning for a fire-escape concert to be held at “the first inkling of spring,” which is also the time when her EP is set to be released.

“My biggest challenge is maneuvering the weather,” she said. “Regardless, there will definitely be another one.”