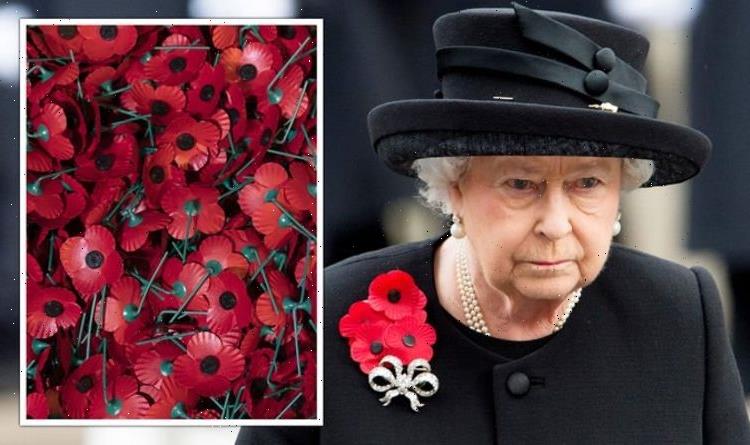 As the famous poem For The Fallen by Robert Binyon goes: “They shall not grow old, as we that are left grow old… We will remember them.” This Sunday the UK marks Remembrance Sunday, commemorating the soldiers who sacrificed their lives in war. Many Britons choose to wear poppies in the run up to Remembrance Day as a mark of respect to those fallen. Here’s how to wear a poppy, and what different colours of poppies mean.

Remembrance Day takes place on the 11th day of November, at 11am.

We commemorate the signing of The Armistice in 1918, ending the First World War.

Remembrance Day is on Thursday this year, but is closely followed by Remembrance Sunday where there is a national service at the Cenotaph in London.

Ordinarily attended by the Queen and other senior royals, as well as Government officials, wreaths are laid at the Cenotaph.

This year the Queen may not be able to attend after being ordered to rest by doctors.

How to wear a poppy

Paper red poppies can easily be slotted into a buttonhole, whereas enamel pins can be pinned onto clothing.

Traditionally, poppies are worn on the left, as this is where military medals go.

The Queen sports her five poppies on her left side too: if in doubt, you can’t go wrong following Her Majesty’s example.

However, the Royal British Legion’s website says: “There is no correct way to wear a poppy.

“It’s a matter of personal choice whether someone chooses to wear a poppy and how they choose to wear it.

“The best way to wear a poppy is simply with pride.”

What do different coloured poppies mean?

The most common poppies we see during the months of November is the red poppy sold by the Royal British Legion.

The Poppy Appeal by the Royal British Legion raises funds to support serving and ex-serving members of the armed forces and their families.

This year marks 100 years since the Poppy Appeal was founded.

You can buy a red poppy from a local Poppy Appeal collector, or you can purchase them online, including from Amazon.

The red poppy might be the most popular, but you can find poppies of different colours to help you express your remembrance in the way you would like.

Black poppies pay tribute to the black, African and Caribbean communities’ role towards the war effort.

White poppies have been worn since 1937 and remember all victims of war, while pledging peace.