Australians are being promised a new era of change after Anthony Albanese takes office as Prime Minister early on Monday in one of the fastest transitions to a new government in the nation’s history, with five senior Labor figures carving up the top posts in an interim ministry.

The urgent appointments clear the way for Albanese to form government while Labor gains confidence it can govern with a workable majority in its own right despite historic gains for independent candidates and the Greens, who could hold the balance of power in the Senate. 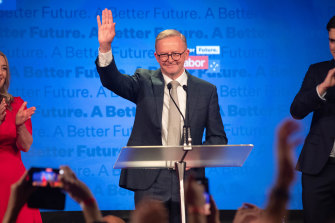 Albanese declared his ambition to change the way politics is conducted in Australia after a savage swing against the Coalition in Saturday’s election, driving Prime Minister Scott Morrison out of power and elevating independent women as new powerbrokers in Parliament.

“It’s something that’s a big moment in my life but what I want it to be is a big moment for the country,” Albanese said on Sunday.

While Labor is confident it will gain at least 76 seats and a majority, Greens leader Adam Bandt is preparing to demand changes to the new government’s agenda, especially greater ambition on climate policy, after the Greens emerged with at least three seats in the lower house.

Bandt claimed a “massive mandate” for the Greens on climate and inequality after the party won lower house seats from Labor and the Liberals in Queensland and appeared to be on track to hold 12 seats in the Senate. The teal independents are also pushing Labor to take stronger action on climate, including larger cuts to greenhouse emissions.

In a conservative assessment, the Australian Electoral Commission indicated there were 74 seats for Labor in a count shortly after 5pm on Sunday, while the Coalition had 55 and there were at least 10 seats for independents as well as Queensland independent Bob Katter and South Australian independent Rebekha Sharkie. This left another 10 seats yet to be determined.

The AEC’s official tally said the Coalition had gained 35.6 per cent of the primary vote nationwide compared to 32.8 per cent for Labor and 12 per cent for the Greens.

The formalities on Monday morning mean the government will be installed within 48 hours of the election, a rapid pace made necessary by plans for Albanese to fly to Tokyo at around noon on Monday to attend the “Quad” summit with leaders from the United States, Japan and India.

With talks on China dominating the meeting of the Quadtrilateral Security Dialogue, Albanese is expected to use his first meeting as prime minister with US President Joe Biden to note the Labor Party’s decision to cement the Australian alliance with the US in the Second World War.

Albanese will visit Governor General David Hurley early on Monday to be sworn in as the nation’s 31st prime minister on the understanding that no other leader in Parliament is in a position to hold the office, given Morrison conceded defeat on Saturday night.

Morrison described Albanese as the “incoming prime minister” and said he had phoned him to congratulate him on his election victory.

Setting up an interim ministry, Albanese will ask the Governor-General to appoint Jim Chalmers as Treasurer, Katy Gallagher as Finance Minister and Penny Wong as Foreign Minister.

Labor deputy leader Richard Marles will be sworn in as Deputy Prime Minister but declined to name the role he would take, fuelling speculation he will be moved from his shadow portfolio of jobs and reconstruction in order to take defence, a portfolio he has enjoyed holding in the past.

Labor sources indicated the five leaders, including Albanese, would divide portfolios so each ministry and department was covered in the interim ministry for at least a week.

The state of the final Labor ministry is in flux after the defeat of environment spokeswoman Terri Butler in the Brisbane seat of Griffith and the likely defeat of home affairs spokeswoman Kristina Keneally in the western Sydney seat of Fowler, forcing a reshuffle of positions and a search for promotions.

The left is expected to name NSW Senator Jenny McAlister to replace Butler, who has conceded in her seat, while right faction leaders are holding off on a decision about replacing Keneally, who has not conceded.

A formal decision on the frontbench must wait until the Australian Electoral Commission confirms the seats Labor has won so the caucus can meet to name the leadership positions, a gathering likely to take place next week.

Under Labor rules, Albanese will name the portfolios for the frontbenchers who are chosen by the caucus.

Morrison attended church with his family on Sunday and spoke about the importance of his faith as a foundation for his life and his time as prime minister.

“God holds us, whether you’re a prime minister or a pastor, running a business, teaching in schools, working in the police force – it doesn’t matter,” he said.

“I’m very pleased that the last thing I say as PM is here.”

The party is still in the race for seats including Bennelong, Lyons and Macnamara, which it is trying to hold against the Greens.

Counting is expected to take days in at least three other seats: Brisbane, where the Greens and Labor are in a contest over which of the two parties defeats the Liberals; Deakin, where Labor believes it can seize the Melbourne seat from the Liberals; and Gilmore, where the Coalition is confident of defeating Labor but the outcome is unclear.

Labor has conceded defeat in Griffith and is calculating that the Greens will win another Queensland seat, Ryan.

The primary votes for the three parties were within the margin of error for the most recent Resolve Political Monitor published by The Sydney Morning Herald and The Age, which had the Coalition on 34 per cent, Labor on 31 per cent and the Greens on 14 per cent. The margin of error for the survey, released on Wednesday, was plus or minus 2.2 per cent.

In two-party terms, the AEC said on Sunday night that Labor had 52.5 per cent of the vote while the Coalition had 47.5 per cent, but this measure did not reflect the big gains for the Greens and independents. The two-party result was in line with the outcome of the last Resolve Political Monitor.