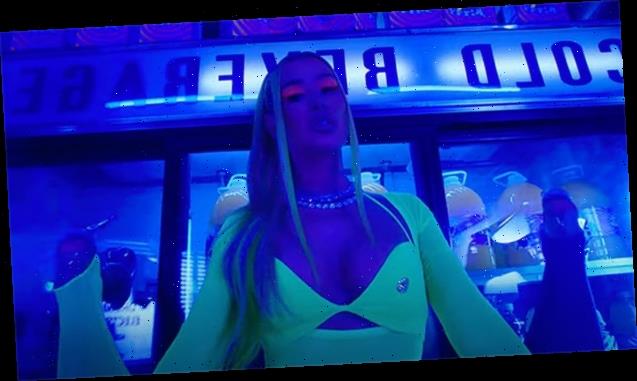 Drink it in. Iggy Azalea has once again teamed up with Tyga for ‘Sip It,’ a song and video that’ll have fans thirsting for ‘Kitty Juice’ (and for clubs to reopen, so they can bounce to this new track).

Three years after their first successful collab – and speculation that they were more than just music partners – Iggy Azalea and Tyga have reunited once again. This dynamic duo teamed up for “Sip It,” one of two new songs the “Fancy” rapper released on Apr. 2. While “Brazil” might catch the ear of Iggy’s South American fans (especially those who are prone to leaving “Come To Brazil” comments on her IG posts), “Sip It” will catch the eye of anyone who gazes upon its booty-shaking, neon-bathed glory. 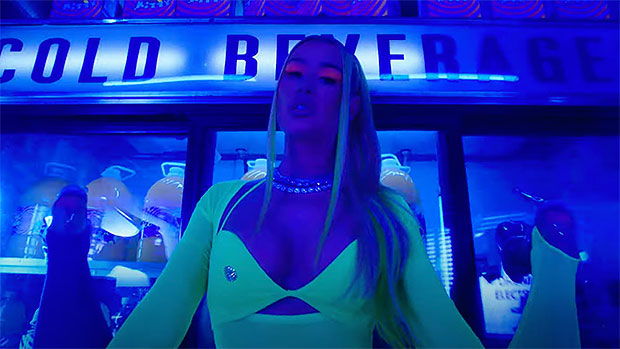 The music video takes place in the “Kitty Juice” Sip It gas station, an innuendo that doesn’t need much explaining. Visitors who sip on the store’s “Kitty Juice” enter a psychedelic trance (which is essentially over three minutes of Iggy bouncing and showing off her flexibility while holding a gas station styrofoam cup).

“S-p this p–sy like its styrofoam,” Iggy sings as she rocks her Kitty Juice gas station uniform: a sheer green jumpsuit, layered with strappy plastic lingerie that could’ve doubled as an outfit for EDC. Tyga later makes his entrance in the video in an equally eye-catching ensemble: a puffy orange jacket, funky print pants and a gigantic fur hat. The visuals even contained several Easter Eggs about Tyga and Iggy’s last video together, as you can see below.

Iggy got fans sufficiently hyped ahead of the new song/video, thanks to a series of sizzling Instagram posts. “Eden the moment…. oops, I mean doll,” Iggy captioned a Mar. 23 photo of her alongside YouTube star Eden The Doll. Three days later, Iggy dropped the “Sip It” cover artwork (warning: flashing) that saw her sipping on a pink straw while leaning over the counter of the technicolor convenience store. On Sunday (Mar. 28), Iggy posted a gallery of behind-the-scenes shots, including one that showed fans the “mop bucket stripper pole,” Tyga against his expensive ride, and how they were still observing COVID protocols. The last preview, on Monday (Mar. 29), was a snippet of the video that drove home the point that this upcoming collab was going to be a 100% sex jam.

Iggy and Tyga previously worked together on 2018’s “Kream,” a slow-bounce track that reached No. 96 on the Billboard Hot 100, Iggy’s first entry into the chart since 2016’s “Team.” It was certified platinum by the RIAA in 2019. She found greater chart success with “Sally Walker” and “Started,” the first two singles from her 2019 album, In My Defense. They reached No. 70 and No. 73, respectively, on the Hot 100, but neither reached the commercial success of “Kream.” Five months after In My Defense, Iggy released her Wicked Lips EP in December 2019, a project that featured “Lola,” her collab with Alice Chatter. 2020 was mostly quiet for Ms. Azalea, as she only put out “Dance Like Nobody’s Watching,” a collab with Tinashe that received average-to-positive reviews. 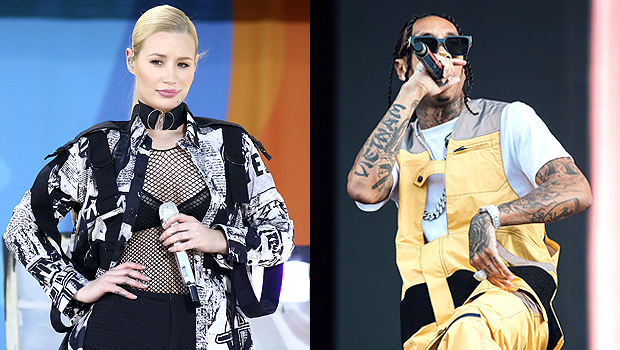 Most of Iggy’s 2020 was occupied by a different kind of “release.” She announced in the June of 2020 that she welcomed a child with Playboi Carti. “I have a son,” she wrote in the now-famous Instagram Story post. “I want to keep his life private but wanted to make it clear he is not a secret, and I love him beyond words.” Iggy shared the first glimpse of her boy, named Onyx Kelly, a few months later. Unfortunately, Iggy and Carti’s relationship didn’t survive 2020, but that hasn’t stopped Iggy from enjoying life as a mom. “In other news, my son is about to walk any day now!” she tweeted on Feb. 7. “He has been standing and trying to step [forward] but lands on his butt. I feel like it’s about to happen, and I’m so f-ckingggg excited.”