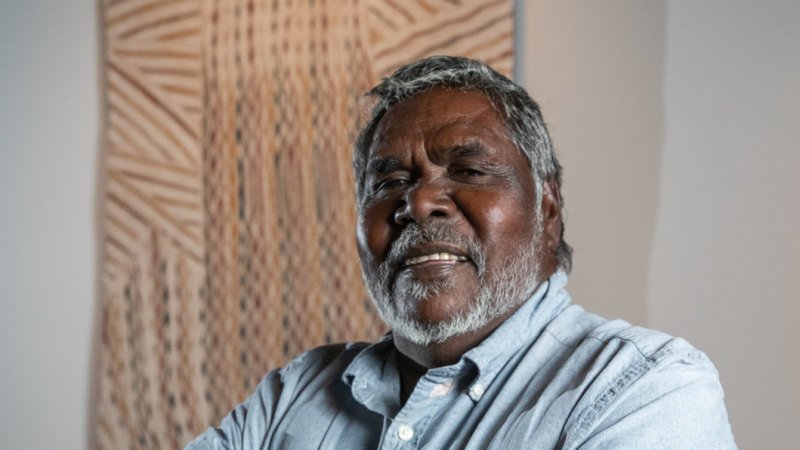 The winner of Australia’s most prestigious Indigenous art award is Djambawa Marawili AM from Yilpara in East Arnhem Land for his work Journey to America 2018.

The Telstra Art Award – with $50,000 for the winner – is the main prize in the Telstra National Aboriginal and Torres Strait Islander Art Awards (NATSIAA), held in Darwin each year. 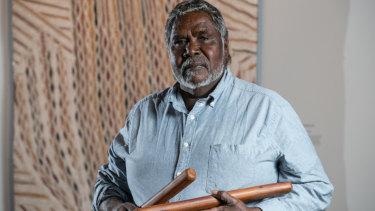 Artist Djambawa Marawili AM from Yilpara in the Northern Territory in front of his work ‘Journey to America’, 2018.Credit:Helen Orr

Attracting 280-odd entries from around the country, the short-listed and winning works are displayed at the Museum and Art Gallery of Northern Territory (MAGNT ) until November 3.

Made from natural pigments on stringybark, Marawili’s work breaks away from traditional subject matter and features the Statue of Liberty. It is a reflection on his recent travels to the States, where he visited the Kluge-Ruhe Collection at the University of Virginia, the only dedicated Australian Indigenous art collection outside Australia. He selected works for an exhibition opening in Adelaide next month and spoke about the Yolngu philosophy of his homeland.

Through intricate and complex brush work, Journey to America shows those ideas flowing through like sacred Madarrpa saltwater and fire from Australia – illustrated by the coat of arms – to the States, with the Statue of Liberty representing a female ‘ancestral being’ for that country’s citizens. 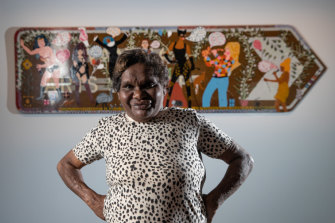 The work reflects an innovation apparent in the entire show. Examples include Kaylene’s Whiskey’s Seven Sistas, 2018, which features Catwoman and Tina Turner among others, painted on a road sign. Mervyn Street shaved and painted his work on cowhide, while Gutinarra Yuninpingu – who is profoundly deaf – created a conceptual video.

Curator of Aboriginal Art and Material Culture at MAGNT Luke Scholes was on the panel short-listing the works, alongside curator and writer Hetti Perkins and Clotilde Bullen of Sydney’s Museum of Contemporary Art.

He says ambition is the key theme this year. “I see artists being less constrained by “traditional” art-making practice. And it takes people like Djambawa, in complete control of what he’s allowed to do culturally and artistically, to break through some of those barriers … That kind of authority breeds innovation.”

Remarkably diverse and powerful, it’s the first time the NATSIAA show has been displayed in two exhibition spaces at the gallery. All works must have been completed in the past 12 months, so it provides a snapshot of the best contemporary Indigenous art in the country.

While Scholes says it’s old-fashioned to suggest that art is a window into a culture, he argues it’s true. “I’ve come to understand so much more about living in this country through my initial interest in Indigenous art… If you want to find out more about what a single painting is about, you cannot help but learn something about that person and the culture that informs that practice.”

“I’m a real believer that if you’re willing to stop and look at this art, you will learn something and you will begin to empathise. And what greater thing is there to do as a human being than to empathise with someone who is unlike yourself.”

The Telstra NATSIA Awards are at MAGNT until November 3.