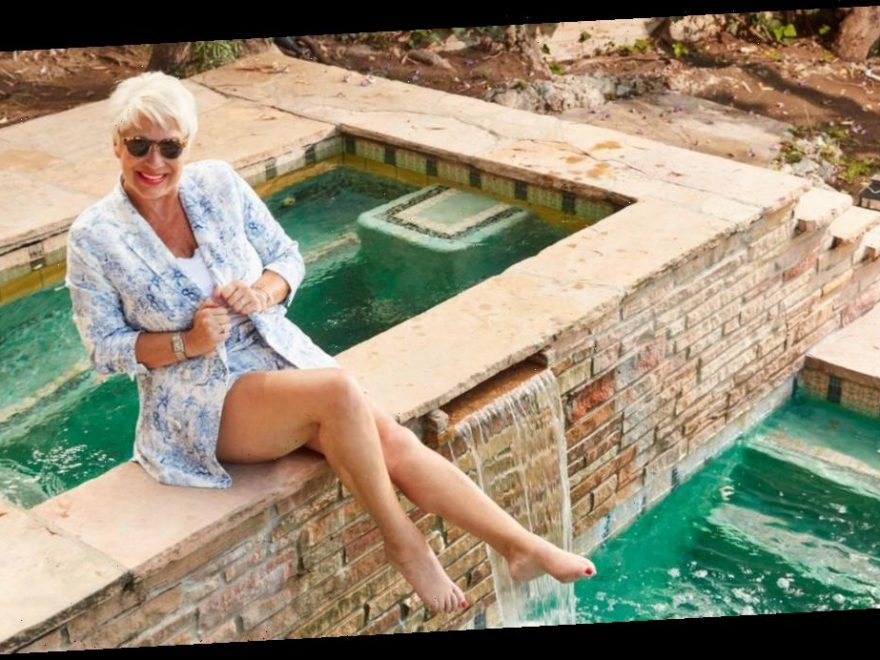 It’s a love story that could have been written for a Hollywood movie, but when Denise Welch met Lincoln Townley at 6am in a London nightclub 10 years ago, little did they know how much their lives were about to change.

Back then Denise, now 62, was barely out of the tabloids, drinking excessively and often seen stumbling, bleary-eyed, out of bars.

Meanwhile, Lincoln, 47, was soon to lose his home, his job as head of PR and marketing at Stringfellows, and was battling his own addictions.

To read the full article and see all the incredible images in full, sign up to our OK! VIP Club below – it's free! And if you're already a member, then congratulations – you're already seeing this exclusive in full!

On paper it didn’t seem as if the pair could make it work.

But last year, the actress and Loose Women panellist and Lincoln – both sober, healthy and very much in love – threw open the doors of their four bedroom Hollywood home, and invited OK in for an exclusive chat.

"Lincoln’s said the only good thing that came out of drinking was meeting me," smiled Denise, mum to actor Louis, 19, and lead singer of The 1975 Matthew, 31.

The couple really opened up to OK! about their strong partnership, Lincoln’s incredible success in the art world, and Denise’s fondness of the west coast of America.

"I’ve got a lot of friends in Hollywood," she said. "But my love affair with LA goes back a long way. I’ve been visiting since the ’70s because my godfather, Ian Le Frenais [who wrote The Commitments, The Likely Lads and Porridge] moved here then.

"I first came over as a drama student when I was 19 and have been to and fro ever since."

Having both her sons succeeding in the entertainment business makes Denise swell with pride. "Louis calls me Kris Jenner and Matthew calls me the mother from The Sopranos! But yes, I’m so proud," she confessed, grinning.

"When Matt was a teenager I had friends with kids the same age obsessing over their children going to university, but I’ve never seen the point of uni unless you want to get the degree for your job. Maybe I was lackadaisical but I knew they would find their own way.

"Don’t get me wrong, there were times at home when Matthew and the boys were rehearsing and I was screaming: ‘Stop playing that f***ing music and get a f***ing job!'"

She added: "But I was always very lucky that my mum and dad encouraged me to follow my dream and I wanted to do that with my children as well."

The Waterloo Road and Benidorm actress also spoke of how proud her sons were of her too, for having finally conquered her booze demons in her 50s.

"They’re very proud of me. It’s not just how sobriety has changed mine and Lincoln’s lives but the ripple effect on the people who love us, mainly our three children. They can go off and live their lives. Because of our sobriety, we’ve given them wings to fly."

Lincoln, who was once the PR man for Stringfellows, opened up about how he got into the art world. "My grandfather, Bob Townley, taught me how to paint," explains Lincoln.

"I was very interested in it when I was young, then I became a teenager and girls came along and I stopped being interested in painting with my grandad at weekends. But my dad died of a heart attack when I was just 14, so I couldn’t go to art college – I had to get a job. My mum said to get out and earn money so I started working in sales."

He also revealed that his darkest time came in 2012, just after meeting Denise.

"I had just 44 pence in my bank account. I’d been sacked from Stringfellows, was hungover after a three-day bender and I’d been living in Hyde Park,’ he said.’I was a mess. I gave up drinking after that."

Not many women would pose in a swimsuit at 61, but Denise oozed confidence during the exclusive photoshoot.

"I feel happier now than I ever did at 30 and 40, partly because I was blighted by illness and self-medication," she admitted.

"But I’m an example that later life can be this complete. So when people knock me when I post a bikini picture on social media, I say I will wear a bikini until I’m 97 if I choose to do so. The compliments from old and young women far outweigh all the trolling."

Thank you for signing-up as an OK! VIP member!