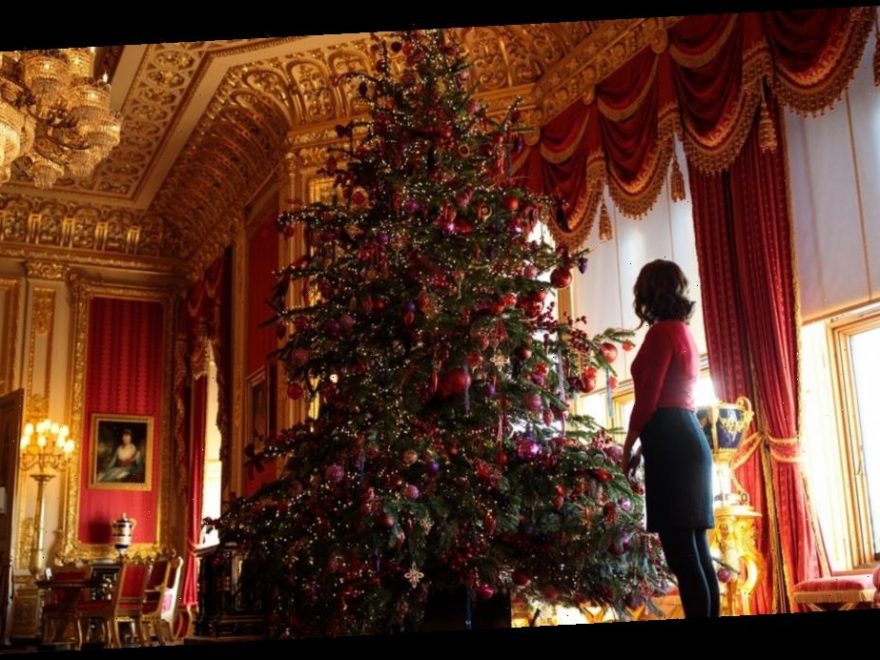 The royal family are said to simply adore Christmas. So, although the Queen is renowned for being frugal, asking staff to use recycled bed sheets for example, she makes sure her homes are a very festive affair with no expense spared.

The Queen and her husband the Duke of Edinburgh are spending the current lockdown at her childhood home, Windsor Castle. It’s in the Crimson Drawing Room that you’ll find a 15ft Nordmann Fir tree, typically decked out in festive red baubles to reflect the sumptuous colour of the décor, along with gold decorations to give some added pizzazz.

A 20ft tree is also erected in St George’s Hall, the magnificent room that was beautifully rebuilt under Prince Philip’s guidance after the devastating 1992 fire. Both trees come from Windsor Great Park and the task of decorating them falls upon staff from the Royal Collection, who scale tall ladders to reach the top.

Photos shared by the royal family also show how other areas of the Castle are given a sprinkle of festive magic. In the dazzling State Dining Room golden arched centrepieces take pride of place on the table along with swish candleabras. Silver-gilt pieces taken from the glittering Grand Service tableware, commissioned by George IV, also go on display after a careful polish.

A towering 30ft Christmas tree takes pride of place outside the front door of Kensington Palace, where the Duke and Duchess of Cambridge reside while in London. Festooned with lights, it marks the official start of Kate and William’s yuletide before they head off to Anmer Hall in Norfolk with Princes George and Louis and Princess Charlotte for the Christmas holidays.

Last year Kate revealed that they had already decorated the tree in their home at Kensington Palace, Apartment 1A, by December 5. During a visit to Peterley Manor Farm in Buckinghamshire, where she helped pick out Christmas trees with local school children she told the farm’s owner Roger Brill about their mess-free tree. He said: "She was asking me about different types of Christmas trees. She said they now have a Nordmann fir which doesn't drop needles."

No expense if spared at the Queen’s London abode with huge 20ft Christmas trees and twinkling fairy lights on display well into January. In the stunning Marble Hall there are usually at least three big trees that all come from the vast estate at Windsor, of course.

Decked out in twinkling white lights and gold baubles to compliment the embossed gold cornices and elegant picture frames, they also feature a variety of crown ornaments, which are available from the Royal Collection shop , along with cute ‘corgi in a coat’ decorations. Little royal carriages also hang from the branches.

The majestic grand staircase, that leads up to the State apartments, is dressed with a stunning garland adorned with colourful baubles and plush velvet bows.

In pre-Covid days, the Queen would personally hand out presents to every member of staff at Buckingham Palace, and Windsor Castle – usually a Christmas pudding in a box, a festive card and a gift voucher, such as a book token, or a small item of china from the gift shop. In total it’s said that the Queen buys 620 gifts for royal staff and family members, running up a bill of £30,000.

Buckingham Palace is also the setting for the grand buffet that her majesty traditionally hosts for her family, before heading off to Sandringham. Around 70 are seated at seven tables with the children sat in a separate room to the adults. No wonder she likes the palace to have a thoroughly festive feel to it.

The main Christmas tree, grown on the Sandringham estate, takes centre stage in the White Drawing Room at the Queen’s Norfolk home, where the family normally gather for the three-day royal Christmas celebrations.

Former royal housekeeper Alexandra Messervy tells OK!: “The family all help to add the finishing touches and the Queen likes to make appropriate adjustments.” However, it’s always Prince Philip who places the gold star on top.

Former royal chef Darren McGrady adds, “The Queen isn’t lavish, so décor is minimal,” but he notes she does insist on having a 30-year-old silver artificial tree in the dining room. Snazzy!

Breaking with traditions observed by many of us in the UK who take down Christmas decorations on the Twelfth night (January 5), the Queen doesn’t remove hers until February 6. Why? As a mark of respect to her father, the late King George VI, who passed away at Sandringham, on that day in 1952, aged just 56.

At Prince Charles and the Duchess of Cornwall ’s London residence, the Christmas decorations are a little less lavish than the Queen’s but still very impressive. In the past the couple’s tree has a whole array of decorations including candy canes, mini Santas. Camilla usually throws an annual party to support charitable organisations such as Helen & Douglas House and Roald Dahl's Marvellous Children's Charity.

At the event children are invited to help decorate the tree, but sadly it’s unlikely to go ahead this year due to Covid restrictions.