Is Germany’s leader so soft on Russia because he’s an ex-Marxist who savaged Nato and bowed to Moscow, asks leading historian DR HUBERTUS KNABE 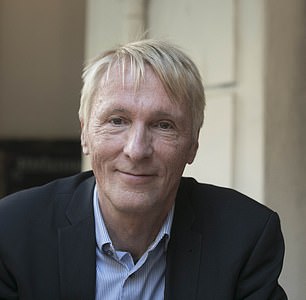 Senior politicians from all over the Western world have visited Ukraine in recent weeks.

Boris Johnson took part in one of the most memorable foreign visits of his prime ministership when he walked around central Kyiv with President Zelensky last month, while UN Secretary-General Antonio Guterres and EU Commission Chief Ursula von der Leyen have also shown the free world’s support for an embattled democracy.

Yet one senior Western politician has been strangely silent on a potential visit to Ukraine: Germany’s Chancellor Olaf Scholz.

Scholz, like many in Germany’s Social Democratic Party (SPD), presents himself as a mild-mannered technocrat, and a pragmatist on the party’s centre-Right. But he has a surprising political past.

At the beginning of his political career, Scholz — who grew up in Hamburg in what was then West Germany — was not only a convinced Marxist but also an ardent follower of the so-called ‘peace movement’.

This portrayed Nato and America as irresponsible warmongers. On many security issues, he openly sided with the Kremlin. 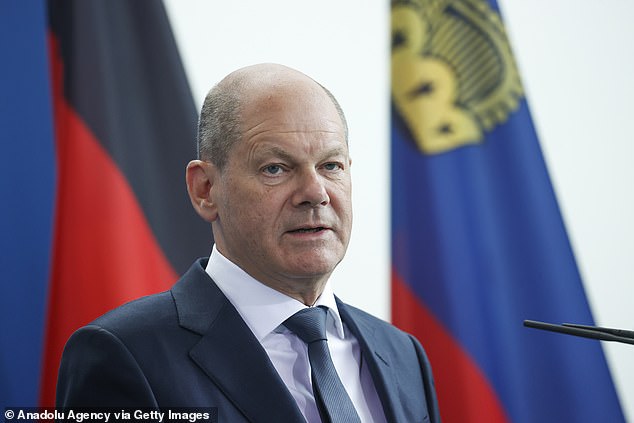 In 1982, when Scholz became deputy leader of the Young Socialists, the Cold War was at its height and the prospect of a nuclear war between Moscow and the West seemed possible

In 1982, when Scholz became deputy leader of the Young Socialists, the Cold War was at its height and the prospect of a nuclear exchange between Moscow and the West seemed all too possible.

In December 1979, Soviet troops had invaded Afghanistan, after the Kremlin had re-focused hundreds of intermediate-range nuclear missiles on Western Europe.

Nato countered this by stationing its own U.S. missiles in Europe, with the support and encouragement of then West German Chancellor and SPD leader Helmut Schmidt.

What did the firebrand young Scholz have to say about this? In essays and speeches, he savaged the ‘aggressive-imperialist Nato strategy’ and its ‘Right-wing’ supporters in his own centre-Left party. 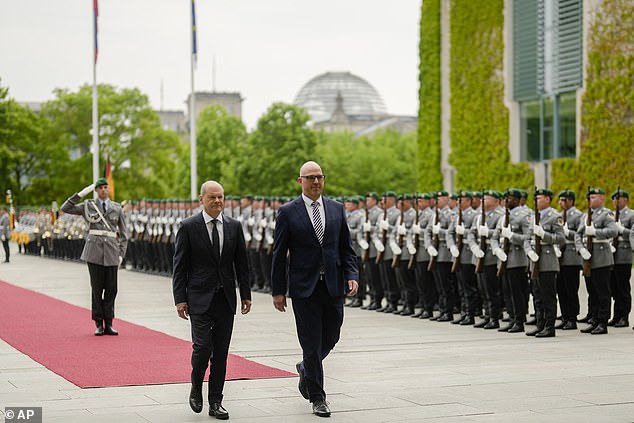 Scholz saw Nato and the U.S. as the main enemy and threat to peace — and not the USSR. Scholz is known to have travelled regularly to the GDR — the so-called ‘German Democratic Republic’. He crossed the border a total of nine times between September 1983 and June 1988

Like many young Marxists in the West, Scholz saw Nato and the U.S. as the main enemy and threat to peace — and not the USSR.

That is why, as has been established, he actively ‘collaborated’ with East German politicians and functionaries in the struggle between East and West.

Scholz is known to have travelled regularly to the GDR — the so-called ‘German Democratic Republic’, not that there was anything democratic about the Soviet satellite also known as East Germany.

Remarkably, he crossed the border a total of nine times between September 1983 and June 1988.

The GDR border authorities were always instructed to free Scholz from ‘forced exchange’ — the money Western visitors handed over which amounted to a border tax — and to give him a ‘particularly preferred, polite clearance’.

At this time ordinary West Germans crossing the border to see relatives, as I did, not only had to hand over money but were routinely harassed by border guards, and often followed by secret agents from the much-feared Stasi.

Yet Scholz was given the red- carpet treatment by the East German leadership.

I have found pivotal documents in Germany’s Federal Archives that show how Scholz allied himself far more strongly with the Kremlin’s policy during the 1980s than with that of the U.S. or the West German government.

In one set of documents, the leader of East Germany’s youth branch, the FDJ, noted that Scholz belonged to a Marxist-oriented group that was often willing to ‘co-operate with Communists’.

In his own party’s youth wing, Jusos, Scholz became an unofficial spokesman for the minority of radical Marxists, railing against ‘reformists’ — non-Marxists — in speeches and essays.

On two visits, Scholz was received by the second most important functionary in the GDR, Egon Krenz. In a GDR news programme, you can see Scholz — still with his mop of red hair — sitting opposite Krenz.

Shockingly, Jusos argued that the Soviet Union should ‘put many more nuclear missiles on the doorstep of the United States’. 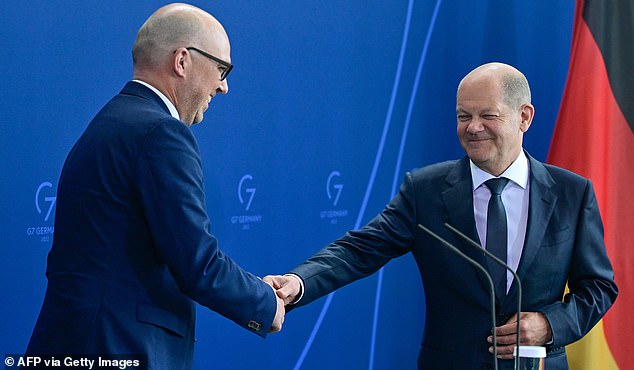 Scholz allied himself far more strongly with the Kremlin’s policy during the 1980s than with that of the U.S. or the West German government

In October 1986, Scholz and his Jusos friends were back in East Germany to meet their Communist counterparts. Once again, Krenz received them and Scholz himself took a leading part in making a final agreement, in which the Communists’ demand to treat the GDR as no longer a part of Germany, was adopted.

Over the next two years of visits, Scholz and Jusos returned to East Germany to lobby against Nato. They criticised particularly U.S. President Ronald Reagan’s plan for a defensive ‘shield’ against Soviet intercontinental ballistic missiles.

In March 1987, it was planned that Scholz should even meet Erich Honecker, the head of the GDR, at a conference.

During this time, the Stasi was viciously cracking down on opposition in the GDR. In January 1988, more than 100 civil rights activists were arrested and some expatriated.

What did Scholz have to say? He emphasised ‘moderate treatment of recent events in the GDR’ when he met his Communist counterparts. And he reiterated his desire to further develop good relations ‘without cyclical strains’.

At another event in June 1988 — months before the downfall of the USSR — the heavily militarised GDR presented itself as a state devoted to peace in front of participants from 113 countries. Scholz was there and treated almost like a state guest: a Central Committee employee picked him up by car at the border.

Later, many reported that he had been a victim of the Stasi, pointing to his name appearing in a couple of documents. 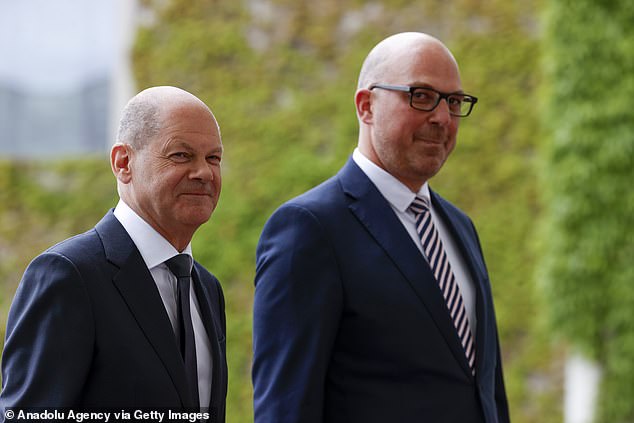 Scholz claims he was spied on by the Stasi. The Stasi never opened a special file on Scholz, as it did with the many unfortunate people it actually targeted

Scholz himself reacted to these reports: ‘Of course, I am aware of the fact that I was spied on. It’s not pretty, but that’s how it is.’

In reality, the Stasi documents simply record Scholz’s name when he attended meetings. The Stasi never opened a special file on Scholz, as it did with the many unfortunate people it actually targeted.

Of course, these events took place a long time ago. Not only has Scholz’s appearance changed since then, no doubt so have his political views.

What has remained unchanged since the 1980s, however, is the imperialist mentality inside the Kremlin. Vladimir Putin, like his Soviet predecessors, seeks to deny Russia’s neighbours the right to self-determination.

Shamefully, many senior members of the SPD were willing to tolerate this for decades — most notably the former Chancellor Gerhard Schröder, who is also chairman of the supervisory boards of two Russian state-owned companies and is due to join the Russian gas giant Gazprom’s supervisory board next month.

It was Schröder who began working with the East German youth branch in 1980 as chairman of the Jusos. Scholz followed in his footsteps. Scholz may have travelled far across the political spectrum — but he cannot escape his past as one of the Kremlin’s ‘useful idiots’.

And today, while the German Chancellor sits on his hands — failing to deliver on his promise of three weeks ago to send heavy weapons to Ukraine — Putin must be rubbing his hands with glee.