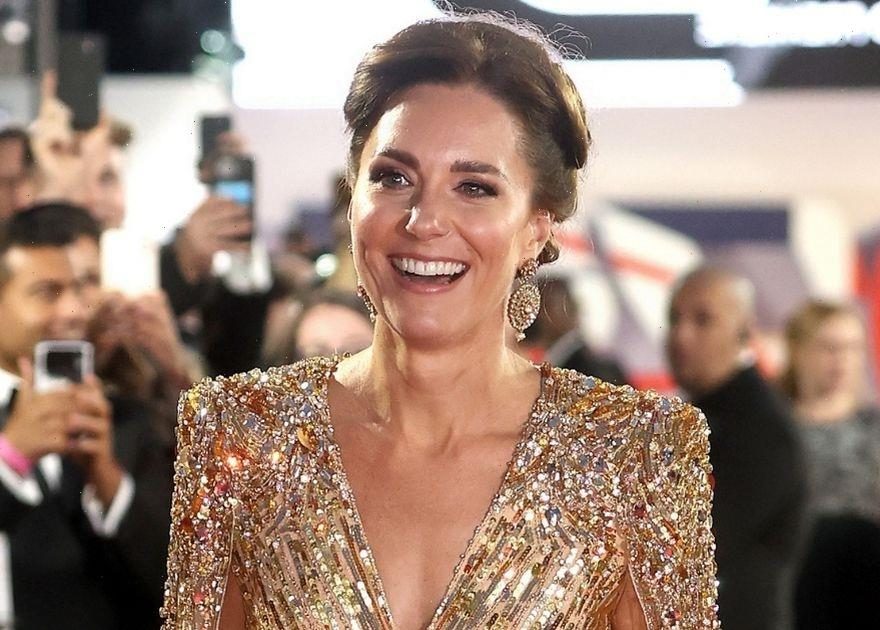 The Duchess Of Cambridge made quite the entrance on Tuesday evening as she attended the UK premiere of the new James Bond film No Time To Die in a gold-sequinned cape gown by none other than one of her favourite designers Jenny Packham.

Featuring a sheer, embellished overlay, a cinched-in waist and a dramatic cape design, you’d be mistaken for thinking Kate was auditioning for the next ‘bond girl’ role.

The gorgeous royal teamed her red carpet look with nude court heels by Aquazzura and gold statement earrings, with her hair styled in a timeless and elegant updo.

Letting her outfit do the talking, she opted for a natural make-up look, while her husband Prince William channelled his inner James Bond, in a classic black tux.

The pair were joined by William’s father Prince Charles and the Duchess of Cornwall, who both looked just as regal.

Although Kate certainly stole the show, she wasn’t the only famous face rocking a cape dress at the Royal Albert Hall event. The trend is definitely having a comeback.

Returning Bond Girl Léa Seydoux had a near-twinning moment with The Duchess, as she turned up in an equally dazzling cape-style gown, but in a frosty silver hue instead.

The actress's gown was a similar sequinned style with a fitted waist, but instead, she opted for a lower neckline with less embellishment. Kate’s version however was so glitzy, that one Twitter user joked they had to put sunglasses on.

“Kate Middleton shining so bright at the James Bond premiere that I had to put on my sunglasses (from LA),” they wrote.

Apparently, James Bond himself Daniel Craig was just as impressed with Kate’s attire, withPeoplereporting he told her; “You look jolly lovely.”

Some may say the look was a touching tribute to William’s late mother Princess Diana, who wore a similar gown to the 1985 James Bond A View to Kill premiere.

Kate updated the look however to feature the 70s-style cape, which we think, thanks to her, is going to make a serious comeback on red carpets- watch this space.