Yum cha restaurants are always more enjoyable when they’re busy; it’s the type of environment that thrives off chaos. You want the crash of trolleys and the incessant chorus of Cantonese, the perfect soundtrack to a sensory dining experience.

On the day I agree to meet Adam Hyde and Reuben Styles, the two men better known collectively as dance act, Peking Duk, the Palace Chinese restaurant is ticking all the boxes. It’s midday in Sydney’s CBD, and Palace is populated with yum cha’s most dedicated clientele: soon to be hungover businessmen.

But the most boisterous table belongs to a group of young female nurses who, based on their placards, are fresh from a rally. The nurses toast to a protest well-staged and get stuck into their food, only pausing when they spot Hyde and Styles enter the restaurant. 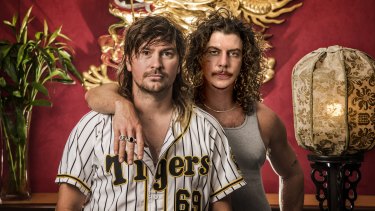 Long hair, don’t care. Reuben Styles and Adam Hyde of Peking Duk are back on the road after being sidelined by the pandemic.Credit:Steven Siewert

“Holy s–t, that’s Peking Duk,” says one of the nurses, a dumpling delicately balanced between her chopsticks. Hyde and Styles address the stares, waving hello and briefly chatting with the table before taking their seats. You get the feeling that even if people didn’t recognise the two men, they might still attract some eyeballs. 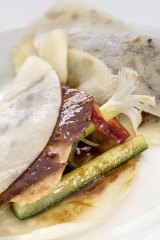 Perhaps it’s the hair; there is a lot of hair in Peking Duk. Hyde has spectacular curls while Styles rocks a curated mullet. They have famous-looking hair.

“How good is that?” asks Hyde, gesturing to the nurses. “We love a protest!”

Styles is being polite. No doubt they’ve done this gag before, but the pair just seem excited to be in the same city. Hyde, 31, now calls Venice Beach in Los Angeles home, while Styles, also 31, lives in Sydney, meaning two years of COVID-19 has mostly kept them apart.

“It’s been a rollercoaster of emotions; there were times when it’s been like, ‘What’s the point in all this s–t?’ It felt hopeless,” says Hyde.

“I’ve lost count of the number of gigs we’ve had to cancel in the past two years,” adds Styles.

“But we were lucky enough to be able to sustain ourselves without having to stack shelves at the supermarket or driving Uber, we had lots of musician friends who had to do that.”

Having met in Canberra as high school students, Styles and Hyde formed Peking Duk in 2010 and quickly landed a residency at a bar in the nation’s capital.

“It was a fancy cocktail bar, and the owner said to us, ‘We need everyone to stay seated and have dinner; if you get people dancing, you’re out,’” recalls Styles.

Challenge accepted. “Obviously, we would get drunk and just turn it all the way up,” laughs Hyde. “And then we got fired.”

Getting fired for being too much fun seems incredibly on-brand for Peking Duk, who promptly went about building a career around making people dance. In 2014, they rocketed into the public arena off the back of their hit single, High. The track placed second on the Triple J Hottest 100 that same year and won the ARIA for Best Dance Release, the first of their two ARIA awards.

Since then, they’ve amassed more than 445 million streams globally and 27 million video views across their catalogue. They are a staple on festival bills around the world, with fans flocking to see their famously high-energy shows.

The pandemic brought their stellar run on the road to a grinding halt, but the downtime proved to be an unexpectedly welcome surprise. 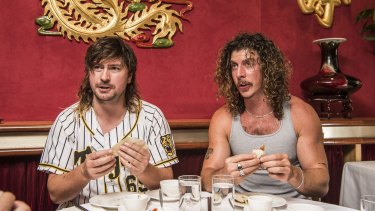 After forming in 2010, Peking Duk have become one of Australia’s most successful dance acts.Credit:Steven Siewert

“My life has done a big 180, and I am actually happier now than before [COVID-19]; I’ve started exercising, copping a few sun rays, I’ve never read so many books in my life”, explains Styles.

“Before then, it was fast food every day, boozing every night, partying non-stop, it was fun as f–k, but it takes a toll.”

“It was f–king fun,” confirms Hyde. “But before COVID-19, we’d been touring all the time and just pushing it constantly; I knew I couldn’t do it anymore. You learn as you go.”

It makes sense then that as our first course arrives, both Hyde and Styles opt for Chinese tea. I’d half expected this lunch to be of the long variety, secretly preparing myself to party with Peking Duk.

“That used to be a real thing; when we first started out, promoters would book us, not so that we’d play, but so we’d party,” explains Styles.

“We’d be flown all around the country – Melbourne, Brisbane, Perth – do like one hour of DJing, and then they’d just want to get loose with us. For a long time, we paid our rent by getting paid to party.”

It’s an existence that has a definite shelf life but leads to the kind of anecdotes you can dine out on forever. Over Peking duck, the boys happily pick apart Peking Duk, mining their history for treasured memories of their most insane gigs. 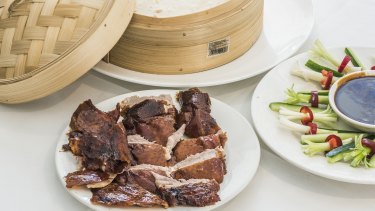 “We played this one bizarre show on the back of a ute in a castle in Vietnam,” recalls Hyde.

“We met this super-rich guy; he loved Scottish and English castles so much he built his own castle.”

“He told us he was in the furniture business,” adds Styles. “But he was almost certainly some kind of arms dealer.”

“Client Liaison also played the castle gig, then we all spent a week together on the Mekong River, where we drank snake blood,” says Hyde.

“We actually ate every single part of the snake. So yeah, we’ve had some good times.”

There are also glory days stories of Hyde’s multiple arrests. “I got arrested in Texas; it was a misunderstanding,” he admits sheepishly. “We played a gig which got shut down by the cops, I tried to talk them out of it, but you can’t really talk to police over there.”

“And you got arrested in New York,” chimes in Styles. “It was his birthday, and we were walking down the street in the snow; Adam was desperate to pee, and nature took its course. Then the cops spotted him.”

Thankfully, growing up doesn’t mean slowing down, and as the world returns to a new version of normal, so too does Peking Duk. They’re back on the road, touring festivals around the country (Groovin’ The Moo last month, Bass In The Grass this month) while promoting their latest single, Honest. The track features US popstar, Slayyyter and is pure Peking Duk; upbeat, high tempo, feelgood. 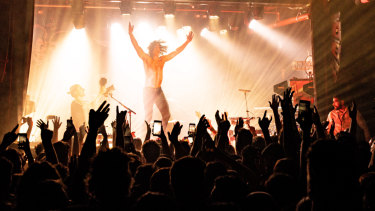 Lights, cameras, crowds! Peking Duk are enjoying a return to life on stage.

“We wrote it during the depths of lockdown, and it actually felt like a challenge; we wanted people to be happy, so it’s a call to good vibes,” explains Hyde. 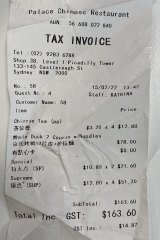 The bill from the Palace Chinese restaurant.

“It would’ve been easy to spend three weeks in the studio playing with dark and murky ideas,” adds Styles. “But we wanted to come out with something uplifting.”

Surprisingly, after more than a decade in the music industry, Peking Duk is yet to release a full-length album. Fans have long rallied for a Peking Duk record, but it’s clear the boys won’t ever subscribe to the evolve-or-die way of thinking. They may have grown up, but that doesn’t mean they’re branching out.

“It feels like as a musician in 2022, you’re expected to do so many different things, become a brand, make content, we should probably be releasing some kind of NFT,” speculates Hyde.

“But we just want to stay true to our core; we’re just two lads from Canberra making beats and tasty treats.”

“To be fair,” laughs Styles, picking up the last piece of Peking duck and popping it in his mouth. “Making Beats and Tasty Treats is a great name for our debut album.”