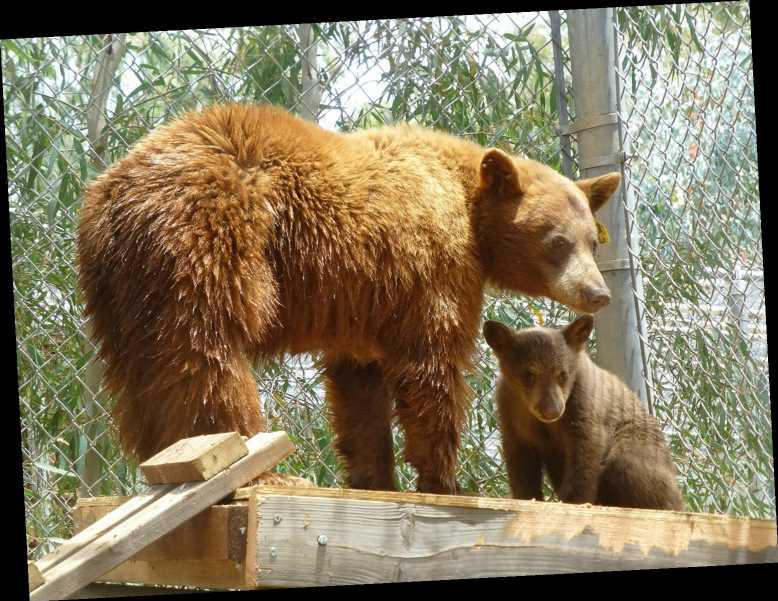 Jackie the 6-year-old mama bear and her cub Russell, 1, are Texans now after spending most of their lives in California.

The bear pair were recently relocated to the 1,400-acre Cleveland Amory Black Beauty Ranch in Murchison, Texas, and are acclimating to their new sanctuary home after an eventful year.

According to the Humane Society of the United States (HSUS), in 2019, the bears were relocated away from a suburban area in southern California because they were getting too comfortable around humans. Originally, the bears were relocated 70 miles away from where they were found by the California Department of Fish and Wildlife (CDFW). Unfortunately, the bears returned to the same suburban area. The CDFW tried to relocate the duo two more times, but each time the bears ended up back in the suburban community where they were found.

To prevent the bears from the "dire outcome" of being euthanized, according to HSUS, the Fund for Animals Wildlife Center — now called Project Wildlife Ramona — stepped in and agreed to care for the bears until a permanent sanctuary home could be found. Cleveland Amory Black Beauty Ranch ended up being the perfect place for the pair, and the bears were recently transported to their new abode. "Jackie and Russell can now safely live out their days here with no human interference. They are thriving — exploring their one-acre habitat, climbing trees, splashing in their pool, and foraging in the leaves and grass. The duo already has their favorite trees — the huge oaks with plenty of branches for exploring," Noelle Almrud, director of the Cleveland Amory Black Beauty Ranch, said in a statement. "They can see and hear the other sanctuary resident bears — Sammi and Eve—in their own nearby habitats and their caregivers hear them all making calls to one another. It is an amazing happily ever after."

Ideally, all bears would be able to live in the wild without getting tangled in potentially dangerous interactions with humans, and that future is possible, but it depends on humans taking steps to keep bears from getting too close. "Wild animals are victims of humans encroaching on their world. Jackie and Russell almost lost their lives because of it. We encourage communities to take simple steps to co-exist with bears," Almrud added. Some of the steps include keeping grills clean, enclosing compost areas, and making trash cans inaccessible to bears. If you live in an area with bear neighbors, you can learn more about how to protect your bears and yourself by reading HSUS's tips.