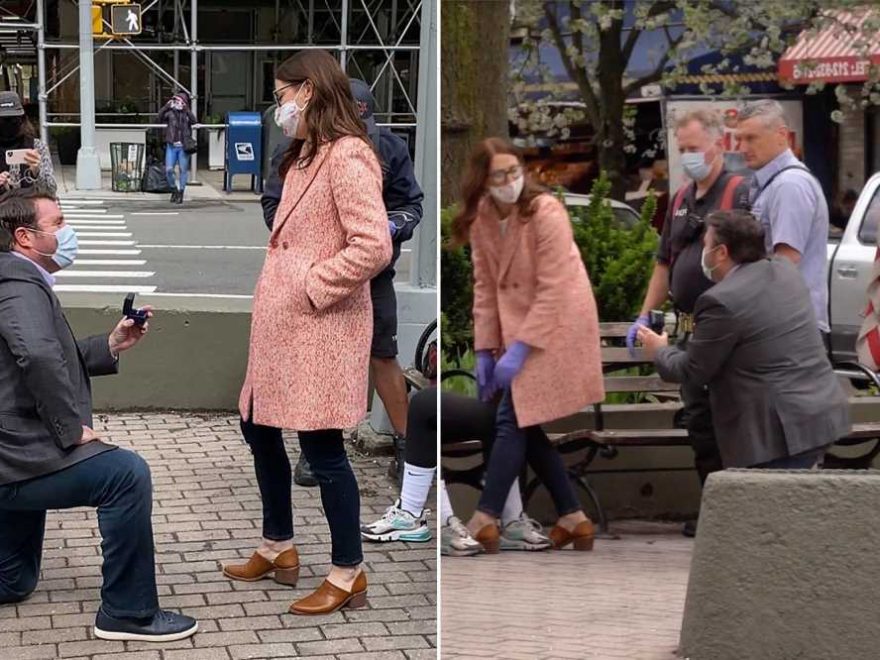 Love is in the Square: Cupid’s arrow strikes Manhattan in the heart on Valentine’s Day

Love is in the New York air — at least it is for Upper West Side native Mike Matthews and his fiancée Amy Marshall.

Matthews caused quite a stir on the city streets when he staged a fake emergency involving the FDNY and his pregnant friend — plus “Queer Eye” star Tan France — as part of his very elaborate proposal.

“I was wrestling with a couple ideas — believe it or not, this was the most tame idea,” Marshall, who is in his early 40s, told The Post.

Marshall and Matthews, who have been dating for two-and-a-half years, were already unofficially engaged and even had set a date for the wedding, but the soon-to-be-groom wanted to make it official.

The couple had planned to take engagement photos on April 16, but Matthews hatched a plan to make the day extra memorable for his fiancée, who is a maternity nurse.

“I don’t recommend getting engaged on the way to get engagement photos unless your girlfriend has a great sense of humor and a lot of patience,” he joked. “I was riding way too close to the edge.”

Marshall is the Senior Director of Nursing of Maternal Child Health at Lenox Hill Hospital and since “babies are her world,” Matthews said his scheme was “the most fail-proof plan.” He also was shocked his beau has never come across an unexpected emergency on the street where she could be of assistance.

“I always wanted to create a fake emergency for Amy in NYC,” he said. “I just couldn’t believe she hadn’t witnessed something like someone getting hit by a taxi or someone choking at a restaurant and going into action. I see stuff constantly, but I have zero skills.”

On the day of the surprise proposal, Matthews enlisted help from a pregnant pal who pretended to go into labor along with FDNY firefighters, who were present at the scene of the fake emergency.

Matthews showed his lady love a fake screenshot from the crime- and emergency-tracking Citizen app that indicated a woman was about to go into labor about a block away from where they were buying bagels. The pair immediately rushed to help.

Just as Marshall offered her medical services to the woman sitting on a bench surrounded by firefighters, Matthews got down on one knee to present a diamond ring.

As for why the proposal happened after the engagement, Matthews said the rock — and the pandemic — held it up.

“The ring did take two months to be made, so I only had it in my possession for a couple weeks,” he said, noting that they finally set a date and shared the news once family and friends were vaccinated and ready to travel. “Amy did have to spend a lot of time saying, ‘I’m getting married!’ and then having to explain why she didn’t have a ring yet. That’s my bad.”

After the epic proposal, which Matthews posted photos and a video of on social media, the soon-to-be husband treated the 13 FDNY members to delicious burgers and fries from Five Guys in exchange for their services.

The pair will be wed in Central Park on May 6, “which happens to be National Nurses Day,” Matthews noted, but have plans for a bigger ceremony once the pandemic ends.

As for the icing on the cake, Matthews also got a personal video from “Queer Eye” star Tan France, who apologized to Marshall for the chaotic manner of the proposal.

“I would like to apologize for Mike’s proposal on his behalf,” France said in the video. “He’s very excited to propose to you and marry you. But he understands that that proposal might have been quite shocking. He’s sorry if there is any residual shock or embarrassment!”