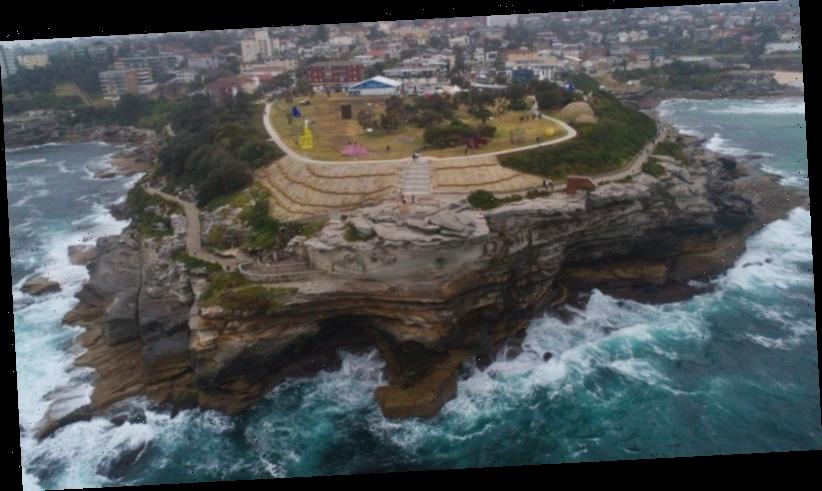 Manly has firmed as favourite to wrestle Sculpture by the Sea from Bondi as a senior NSW government minister lashed Waverley Council for its cavalier treatment of the arts festival.

Organisers of Sculpture by the Sea have also discussed relocation with Sutherland Shire and Woollahra since its relationship with Waverley Council soured over major structural changes to the festival's dress circle location at Marks Park that compromised, or eliminated, the location of a dozen sculptural works. 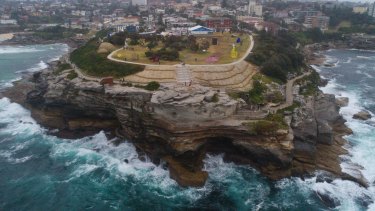 Aerial view of Marks Park, the dress circle vantage point of Sculpture by the Sea at Bondi, rimmed by the offending concrete path, for possibly the last time.Credit:Nick Moir

But only Northern Beaches has scoped out its shoreline for the placement of public sculpture, having already planned and set aside $2 million over four years towards a dedicated public art coastal walk.

Suitable sites for public art have been identified along its coastline but concentrated at North Head, Shelley Beach, along Marine Parade, on the Manly beachfront, Queenscliff and Freshwater beaches and beyond.

As thousands of people flocked to see 111 sculptures by artists from 40 countries this opening weekend, Arts Minister Don Harwin made a rare intervention into the festival controversy, saying he was deeply upset at the way Sculpture by the Sea had been treated by Waverley Council.

''Sculpture by the Sea is an iconic arts festival that has brought visitors from all around Australia and the world and is very much loved by the people of Sydney. It's hard to avoid the conclusion that council doesn't care whether this festival stays in the east or not,'' he said. 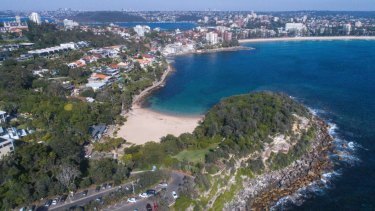 Shelley Beach and Marine Parade in Manly where Sculpture by the Sea may move next year.Credit:Nick Moir

The seaside event is worth more than $11 million in direct spending to the local Bondi economy and brought $38.9 million to NSW as a whole, according to an economic study by BIS Oxford Economics commissioned by Sculpture by the Sea.

But the lack of recognition of the tourism and economic heft of the event and council's disregard of the festival's objections to the route of a new all-access concrete path that has diminished its outdoor sites has triggered talks with rival councils.

''How can you stage an exhibition of this scale when one of the major stakeholders, one of the major beneficiaries, does not recognise the magnitude and the benefits it's receiving for almost no cost?'' Sculpture by the Sea director David Mr Handley said. 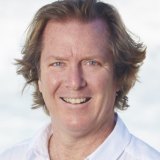 David Handley, founder of Sculpture by the Sea.Credit:Nick McCubbin

While Manly may lack the same international cachet of Bondi it has a lively arts scene, is accessible by ferry, its council is keen and the area boasts grand vistas to the harbour and along the coastline to Palm Beach.

A scoping study to identify opportunities and locations for public art was launched by Northern Beaches Council as part of its Coastal Public Art Walk strategy exhibited early this year.

To questions around the progress of a scoping study to pave the way for Sculpture by the Sea, Northern Beaches Council mayor Michael Regan was silent:  ''As we have consistently said, we would love the opportunity to welcome Sculptures by the Sea to Manly, Australia’s best beach and a major global tourist destination. Hosting Sculpture by the Sea would not only add to our rich artistic program but also bring great benefits to our local economy.''

President of the Bondi and District Chamber of Commerce, Emmanuel Constantinou, said the eastern suburbs business community wanted Sculpture by the Sea to stay and hoped Waverley Council could come to some agreement with the event's founder. 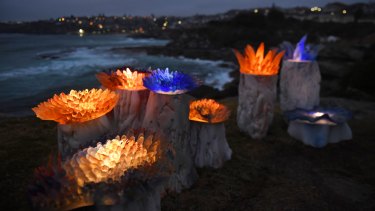 Dawn at Sculpture by the Sea, Bondi. Credit:Nick Moir

Mr Handley confirmed only that a Sydney council had commissioned a feasibility study. An interstate council had also commissioned a scoping study, a location of ''strong interest'' to the event. He declined to name both but organisers are looking at all options between the end of the event and February next year. However, Sculpture by the Sea's early dealings with new Waverley Mayor Paula Masselos had been positive, Mr Handley said.

One western Sydney and four new regional NSW sculpture projects were also in development or in discussion following recent approaches to Sculpture by the Sea, Mr Handley said.

''To stage an exhibition of any note you need the wholehearted support of those who manage the venue and to work hand in glove understanding each other’s needs and aims, he told the Herald. ''We are experiencing this with these potential new venues.''

No decision would be taken until early next year after Sculpture by the Sea closed. It was now time, he said, for the spotlight to fall on participating artists.

''We are awaiting a response from Sculptures by the Sea, who indicated they would assess the feasibility of each application before making a decision on the successful candidate later this year.''

Woollahra Council believes it has the dramatic scenery to showcase a sculptural walk but has had no further contact with Sculpture by the Sea organisers since an initial meeting in August.

Mr Handley has previously ruled out interstate locations such as St Kilda beach in Melbourne as too open and flat with too much visual clutter. ''The Great Ocean Road would be extraordinary but to do that properly would require significant resources,'' he said.

In 1998 Mr Handley scouted locations for the Olympic Arts Festivals staged in Noosa, Darwin, the Tasman Peninsula and Albany. With the exception of Noosa, Mr Handley said each location would be difficult to attract corporate sponsorship. Noosa Shire Council said it was not in any formal discussions with Sculpture by the Sea.