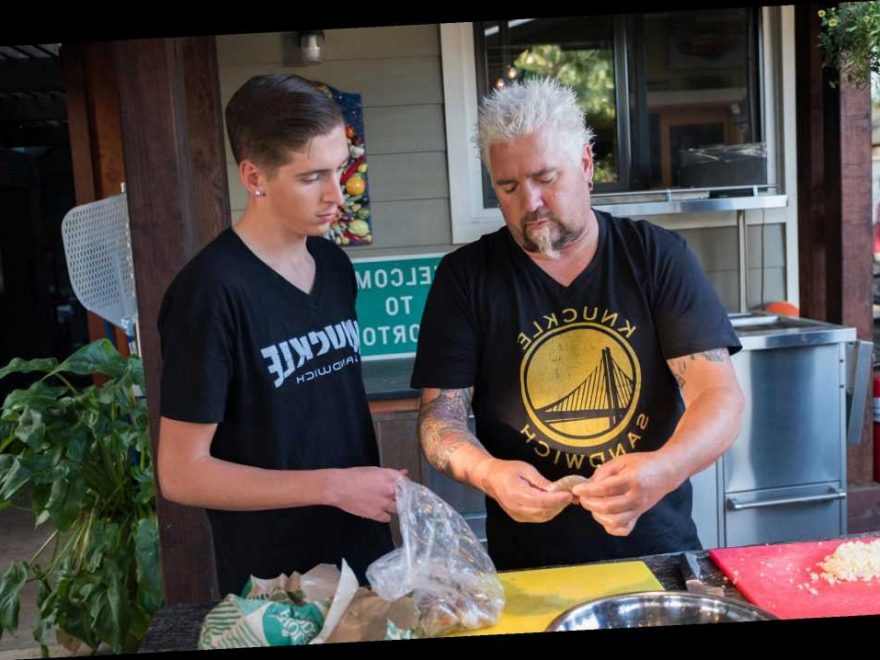 Guy Fieri’s got an heir to his dine-asty.

His son, Hunter Fieri — the self-proclaimed “Prince of Flavortown” — is ready to rock the frosted-tipped crown and take his place as a veritable Food Network star.

“I work side by side with my dad. We’re best friends, we do everything together at this point,” the 24-year-old told The Post. Now, he’s gearing up to step into the family business, joining his dad in October for a new season of “Guy’s Grocery Games,” which the duo will film from their ranch in Santa Rosa, Calif.

The goatee doesn’t fall far from the tree: In December, Hunter graduated from his dad’s alma mater, the University of Nevada, Las Vegas, where he studied hospitality and restaurant management. Although he expected to travel and work at some of his dad’s friends’ restaurants, Hunter’s plans were upended when the coronavirus pandemic hit.

But the Fieris were able to turn lemons into off-the-hook lemonade. In May, Hunter started appearing on the “Takeout” edition of “Diners, Drive-Ins and Dives” alongside his pop, giving commentary while Guy does video calls with fan-favorite chefs from the show, which has been a Food Network staple since 2006.

“I always wanted to be on TV with him. When I was a kid . . . I was camera shy,” said Hunter. But “I felt comfortable with ‘Triple D’ because I knew all the crew, I knew so many of the restaurants.”

Guy has been heading up Hunter’s culinary education since he was just a food-loving tot.

“My dad taught me at a very young age how to use a knife, he had me cooking at 5 years old, cutting onions for him,” Hunter said.

A few years later, he was ready for his first dish. “When I was in third or fourth grade [Dad] tells me, ‘I’m done getting up and making you breakfast at 6 a.m. before school. You’re going to get up now, I’m going to teach you how to make breakfast,’ ” said Hunter. “He taught me how to make a French toast sandwich and put cream cheese and sliced strawberries in the middle.”

Hunter said his mom is also a talented cook, whipping up family favorites such as taco salad, chicken salad and a “mean marsala” for her husband and two kids.

Growing up in Flavortown means that Hunter is comfortable in the kitchen, too. “Understanding the flavor of ingredients is a really important thing, but once you get that concept down, nothing’s really too difficult,” he said. In college, he steered his friends away from making boxed mac and cheese, guiding them around more sophisticated fare: “Fried chicken and waffles, steak and potatoes, risotto,” he said.

Aside from cooking and hosting with his dad, Hunter enjoys outdoor activities, like hiking, wakesurfing and dirt biking. When they’re at the family ranch, he takes care of the goats and the gang’s many pet dogs.

And even before he officially joined the Food Network, Hunter got to enjoy some of the perks, like Guy’s famous 1968 red Camaro, which he drives across America on Triple D. “I’ve driven the car two or three times,” said Hunter, who is single. “That car has a lot of power. Too much power for me.”

Right now, Hunter is focused on “expand[ing] the Flavortown horizon.” “Guy’s Grocery Games” has been adapted for a post-pandemic world: The contestants get baskets of food delivered to them, and Hunter and Guy will video chat with them while they compete in recipe challenges for the chance to win $20,000.

But eventually, he’d like to keep following in father Fieri’s footsteps. “I always wanted my own restaurant,” said Hunter, who also hopes to host his own show. “My dad opened his first restaurant when he was 28. It’s crazy. I want to have the most knowledge that I can before I go and open a personal restaurant like that.

“[My dad] worked his butt off, and he taught me the same work ethic: Keep working, and keep your head up high. And learn everything you can.”

The most important lesson? “Don’t be Guy Fieri’s son, be Hunter Fieri,” he said. “Show them what you’ve got.”