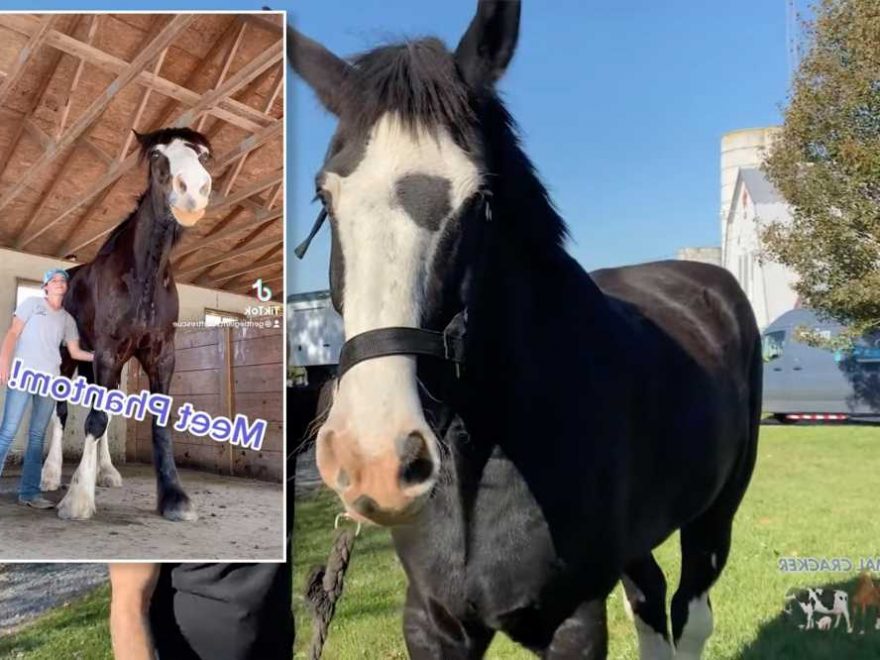 Meet Peabody, the ‘smallest horse in the world’ and his dog friends

Runaway horse reined in by cops in Staten Island

This shiny-haired stallion has a colt following.

Phantom, a 7-year-old Shire breed who lives at a Maryland rescue center, is getting a lot of attention after a TikTok video showcasing his towering, nearly 7-foot height brought in more than 11 million views.

Although Shires are generally a tall breed, Phantom’s soaring stature is still unusual, as the largest rarely clear 6 feet.

“We can’t take Phantom anywhere without crowds coming over to stand next to him and get a picture of the giant horse,” Lauren Nation, director of development at Gentle Giants Draft Horse Rescue in Mount Airy, Maryland, told Newsflare. “Many people can’t believe there are horses as big as him.”

He is only about an inch shorter than Big Jake, the world’s tallest horse until his death last month at age 20, and measures about 6.75 feet — or 20.1 hands — at his highest point. Phantom’s trainer, Courtney Garner, said he is the biggest horse she’s ever ridden.

Astonished TikTok viewers marveled at Phantom’s height, with one wondering, “how do u get on him?” and another noting, “It’s just amazing to me that some breeds of horses can get this big.”

Phantom has lived at the facility since last year, when his large size became too much of a challenge for his owner to handle. The nonprofit center specializes in saving draft horses “from slaughter, abuse, and neglect,” according to its site. Usually, those horses are picked up from auctions right before they would have been sent to slaughterhouses.

“We are the largest draft horse rescue in America and have seen numerous giant horses like Phantom,” said Nation, 32, who claimed she has seen horses up to 5 inches taller than him.

The center facilitates both adoptions and sponsorships and focuses on caring for their horses and getting them healthy.

“They provide medications and special treatments, and in the hot summer months, horses like Phantom get a cold rinse with the hose and sunscreen applied to their pink noses,” Nation told SWNS of the caregivers at Gentle Giants. “Volunteers love to bring special treats and Phantom knows who has something tasty in their pockets before they even enter the field.”