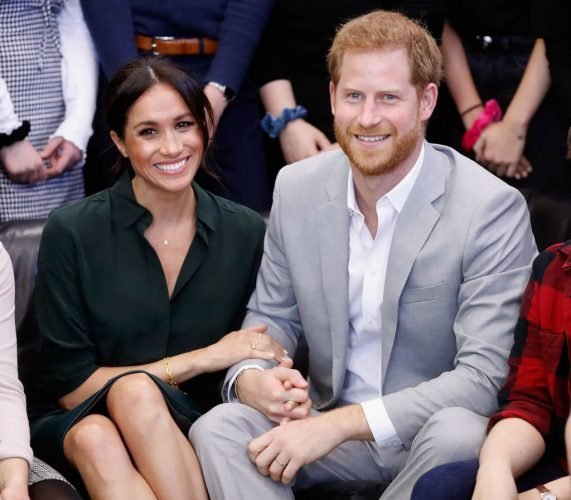 Meghan Markle and Prince Harry offered a small glimpse into baby Archie’s christening over the weekend. The Duke and Duchess of Sussex shared two photos from the religious ceremony on social media, including a family portrait and a black and white pic of the couple holding their baby. The new parents appeared more than happy in both images, but royal watchers were not convinced their intimacy was real.

Queen Elizabeth II and Prince Philip were not in attendance dueto previous engagements. The decision to keep the christening private sparked agood share of outrage from fans and the backlash continued following the socialmedia posts.

This morning, The Duke and Duchess of Sussex’s son, Archie Harrison Mountbatten-Windsor was christened in the Private Chapel at Windsor Castle at an intimate service officiated by the Archbishop of Canterbury, Justin Welby. The Duke and Duchess of Sussex are so happy to share the joy of this day with members of the public who have been incredibly supportive since the birth of their son. They thank you for your kindness in welcoming their first born and celebrating this special moment. Their Royal Highnesses feel fortunate to have enjoyed this day with family and the godparents of Archie. Their son, Archie, was baptised wearing the handmade replica of the royal christening gown which has been worn by royal infants for the last 11 years. The original Royal Christening Robe, made of fine Honiton lace lined with white satin, was commissioned by Queen Victoria in 1841 and first worn by her eldest daughter. It was subsequently worn for generations of Royal christenings, including The Queen, her children and her grandchildren until 2004, when The Queen commissioned this handmade replica, in order for the fragile historic outfit to be preserved, and for the tradition to continue. Photo credit: Chris Allerton ©️SussexRoyal

The first photo the couple shared was very similar in tone to PrinceHarry and Meghan Markle’s engagement shots. The pic featured a slew of royalssurrounding the couple, both of whom are seated with Archie.

The second image is a black and white pic of Harry gazinglovingly at Archie while Markle looks on. The photo is much more intimate thanthe first, though body language experts believe the ceremony was a lot morestressful than it looked.

According to Express, body language expert Judi James has examined the photos and thinks the black and white image was staged. James noted that the pic has a very Hollywood feel to it and was meant to show a moment of bliss. But for James, the photo loses some of its intimate quality because it was deliberately staged. It also explains why Prince Harry and Meghan Markle chose to make the christening a private affair.

“It looks deliberately intimate rather than a pose to camerato share the joy and the way we are invited to glimpse the loving moment ratherthan participate goes some way to endorse their request for a privateevent,” James shared.

Tonight, The Duke and Duchess of Sussex attended the first of a two game series of the Major League Baseball #LondonSeries, in support of @WeAreInvictusGames. Tonight’s highly anticipated game between the #Yankees and #RedSox took place at London stadium, Olympic Park. The @WeAreInvictusGames, of which His Royal Highness is Founding Patron, has been selected as charity partner for the @MLB 2019 series. The Invictus Games Foundation is the international charity that oversees the development of the Invictus Games, an international adaptive multi-sport event in which wounded, injured or sick armed service personnel and veterans participate. It celebrates the power of sport in recovery and how it can help, physically or psychologically, those suffering from injuries or illness. The word ‘invictus’ means ‘unconquered’ – it embodies the fighting spirit of the competitors. As part of the partnership, the Invictus Games Foundation have a team participating in London’s #Softball60, the social softball series built for the city and targeted to introduce the sport to new audiences and demonstrate that it is an inclusive sport. On this #ArmedForcesDay, tonight’s event was also a chance for Their Royal Highnesses to shine a light on the men and women here in the UK and around the world who have sacrificed so much for their country. Discover more about the Invictus Games Foundation through the link in our bio. Photo credit: PA

As far as the family portrait goes, James says that it followsall the usual guidelines of the royal family. Prince Harry and Meghan Markleare shown beaming at the front of the group, while the rest of the familysurrounds them in a show of support.

That said, Middleton and William appear a little tense in thephoto and not their usual carefree selves. Charles, on the other hand, looksabout as happier as we have ever seen him, and his hand resting on Harry’schair indicates that he is proud of his son.

Archie’s christening does not stray from tradition

Although fans expected Prince Harry and Meghan Markle to do their own thing when it came to Archie’s ceremony, the photos they shared were very similar to the ones William and Middleton took for Prince Louis’s christening last year. Although the venues are different and the Cambridge’s guest list was larger, the photos are nearly identical. In both pictures, the couple celebrating the christening is seated in front of the group. Queen Elizabeth and Prince Philip also did not make it to Louis’s christening and were therefore excluded from the photo.

The Duke and Duchess of Cambridge have released four official photographs to mark the christening of Prince Louis on Monday 9th July. The photographs were taken by Matt Holyoak at Clarence House, following Prince Louis's baptism in the Chapel Royal, St. James’s Palace.

William and Middleton’s group shot also featured members of bothfamilies. Charles and Parker Bowles were in the pic, as well as Middleton’s momand dad, Carole and Michael Middleton. Her sister, Pippa Middleton, andbrother, James Middleton, were also included in the photo.

The only member of Markle’s family that was included in the imagewas her mother. The rest of her family has created a lot of drama for theroyals and it is completely understandable that they were left out of the shot.

Along with the photos, the Duke and Duchess of Sussex revealedthat Archie’s godparents are featured in the group image. The couple did notreveal who are the godparents, but the photo definitely narrows down the listof potential relatives.

The Duke and Duchess of Sussex are pleased to announce they have named their first born child: Archie Harrison Mountbatten-Windsor This afternoon Their Royal Highnesses introduced Her Majesty The Queen to her eighth great-grandchild at Windsor Castle. The Duke of Edinburgh and The Duchess’ mother were also present for this special occasion. Photo credit: Chris Allerton ©️SussexRoyal

Prince Harry and Meghan Markle have not commented on the rumorssurrounding Archie’s christening. The royal family released a statementfollowing the ceremony, thanking fans for their continued support for the newparents.