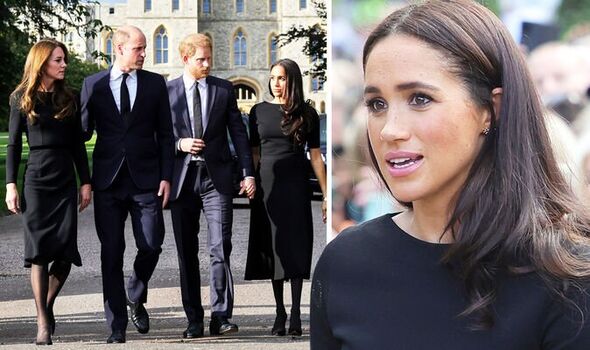 Before Queen Elizabeth’s funeral, the Royal Family took part in several walkabouts where they met members of the public and read the good wishes that had been left for the late monarch. During one outside Windsor Castle, Prince William and Kate Middleton had invited Prince Harry and Meghan Markle to join them. According to reports, the Duke and Duchess of Sussex had been given little notice to prepare, and throughout the walkabout, they followed the Prince and Princess of Wales’ lead.

Jesús Enrique Rosas, aka The Body Language Guy on YouTube, analysed the four royals’ body language and interactions together.

Reviewing the footage, Jesús said: “Meghan was the last one to get out of the car – that’s interesting. Harry jumps out at once, maybe Meghan was expecting or waiting for someone to open the door.”

He went on to note how “Catherine instantly [gets] out of the car….as she closes the door, she is making eye contact with William and Harry – in their direction – but Meghan is not. Catherine is smiling, and Meghan is not… she is not comfortable.”

Kate then makes her way over to the other side of the car and Jesús noted how her stride was “very confident, and strong, she’s upright”. Meghan, on the other hand, hadn’t even “started to walk” over. 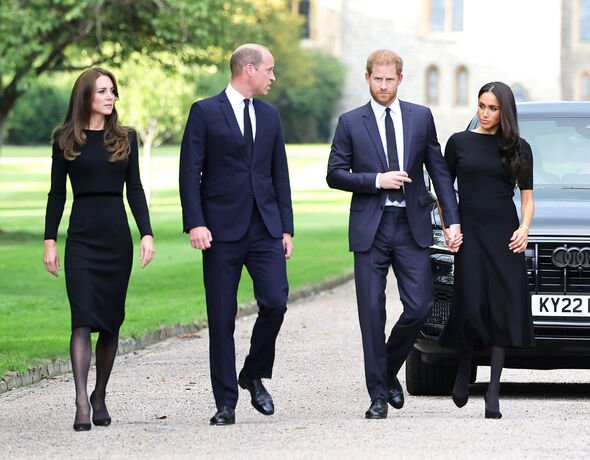 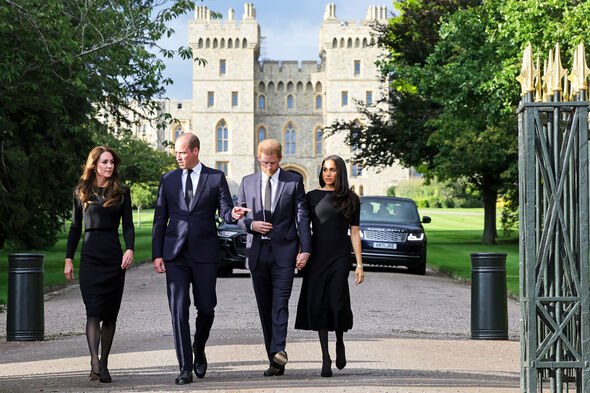 After exchanging pleasantries, “William is the one to signal ‘let’s go that way’ and he just tells Catherine – no one else”, Jesús said. “He looks at Catherine, signals and guides her.”

Meghan and Harry trail behind and in the footage, Jesús notices Meghan looking at, and to Kate several times.

“I want to point out that, look at this, where is Meghan looking? Why does she keep looking at Catherine?” Jesús wondered.

The body language expert claimed Meghan was demonstrating a “side eye” and noticed “tensions in her neck”.

“The two tendons are strained,” he noted. “You can see the tension in Meghan’s neck.”

He then looked at the pictures and footage from the end of the walkabout, just before the four royals got in the car and left.

“This dynamic cannot be unseen,” Jesús suggested. “Here we can see their body language in action; Harry touching Meghan’s back, and she has a bit of a confused face.

“Catherine is relaxed, she is in the middle between William and Meghan and Harry – very few times this happened, this only happened at the end of the walkabout. [Kate’s] posture is normal royal protocol,” he said about her arms being at 90-degree angles and holding her hands. 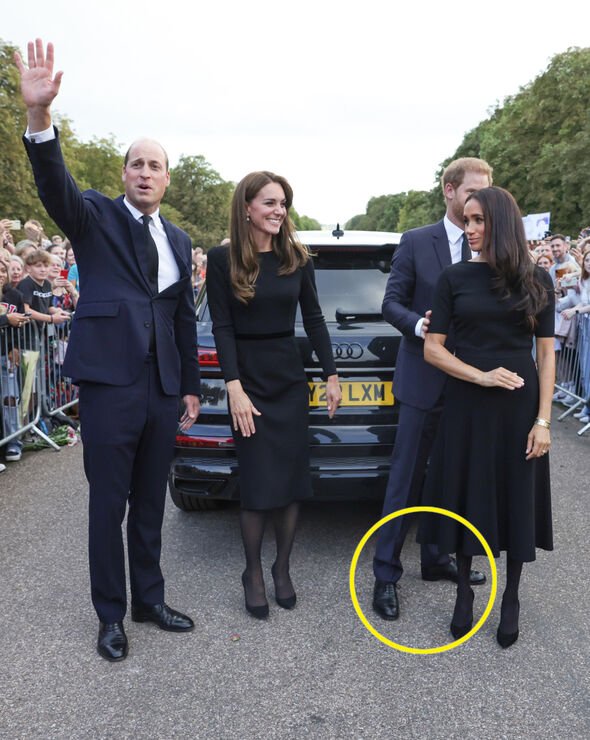 “Meghan is greeting the people [waving], a bit confused,” the expert suggests.

Harry then steps away and “we don’t know much about Harry’s [facial expressions], he is basically hiding behind Meghan”.

“The feet, remember the feet never lie, even if they have to stand in royal protocol fashion,” Jesús commented.

“[There’s a] big difference between Kate and William and Harry and Meghan. It’s like Harry wants to go away. Both women have their feet almost exactly alike, Harry’s feet are away from Prince and Princess of Wales.

“In regards to hands, we can see that Catherine was a bit tense, you can see that she has her fingers together [with flat palms], this was when they were about to leave.

“It’s nice that William was more relaxed at that moment,” Jesús noted referencing the Prince of Wales’ waving and having an open mouth. “[And a] genuine smile from Catherine.

“I don’t know if Meghan was looking at Catherine again or Prince William or the public. Her hands, her right hand was especially tense as is the arm Harry was touching at that moment – the muscles of her forearm are jumping.

“You can’t but help and notice the comparison between the couples, and one of the most telling factors in a picture in regard to body language is the feet because you don’t move all the time. In this moment, they are just standing, but Harry’s feet are telling that Meghan and Harry want to leave as soon as possible,” Jesús added. “And Meghan is very tense.”

Jesús Enrique Rosas is a Body Language expert and Persuasion consultant. He has written several books and conducts masterclasses in body language analysis for Knesix Insitute.