Ex-member of Charles Manson’s cult who escaped months before the group murdered seven people reveals how he lured her in with ‘tender’ sex – and admits his allure was so powerful, she likely would have killed for him, too

A woman has opened up about how she escaped Charles Manson’s murderous cult just months after members of his ‘Family’ committed the gruesome Tate-LaBianca murders in 1969.

Juanita Wildebush, 77, from Oregon, detailed the time she spent with Manson and his followers at Spahn Ranch in Los Angeles County, saying she fears she would have been involved in the murders if she was there because Manson’s hold on her was so powerful.

The retired social worker, who has worked with cult survivors, told The Daily Beast that Manson was an incredible lover, which was part of his allure. 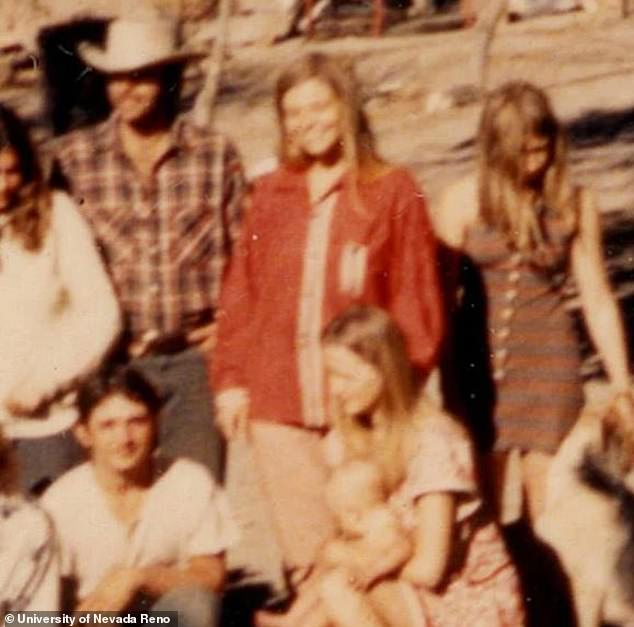 Memories: Juanita Wildebush (pictured in red)  spoke to The Daily Beast about the time she spent with Charles Manson and his followers as a member of his ‘Family’ in the late 1960s 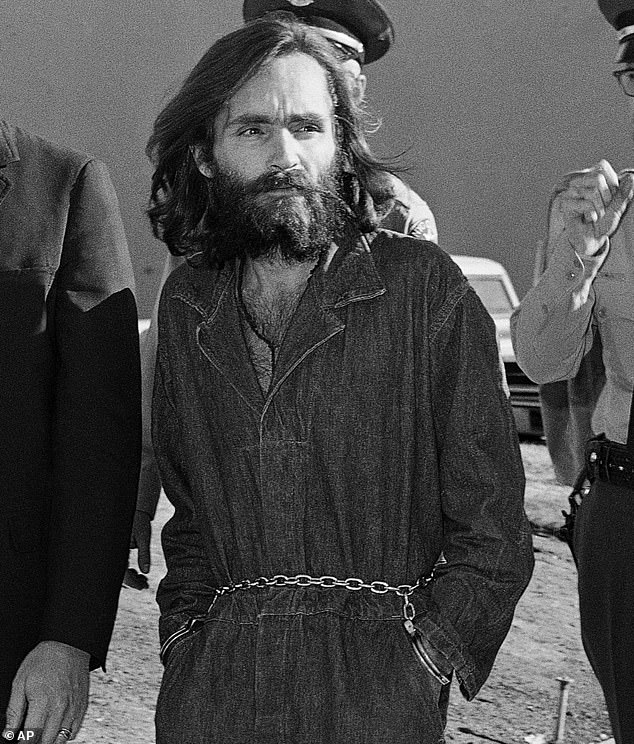 Mind control: The 77-year-old, who now lives in Oregon, said Manson (pictured in 1969) was an ‘amazing’ lover who ‘would bring you just to the point of orgasm’ and then ‘bring you back’

Wildebush was raised in Westwood, New Jersey, a suburb across the river from New York City. She was close with her father, but she had a contentious relationship with her mother, who ‘had a rule for everything.’

After high school, she attended the Universidad de las Americas in Mexico City, where she earned a degree in psychology in 1967. While at the university, she fell for a handsome philosophy major named Carlos and tried LSD for the first time.

At the time, Wildebush was idealistic and disillusioned with the U.S.’s politics and capitalist values. She traveled with Carlos and his friend from school to villages around Mexico, where they would meet hippies who were living abroad, and developed an interest in communal living.

When she graduated in 1967, Manson was fresh out of prison after serving seven years for transporting women across state lines for the purposes of prostitution.

The then 32-year-old petty criminal started forming his ‘Family’ in San Francisco during Summer of Love, recruiting mostly young girls, before relocating to Los Angeles.

Meanwhile, Wildebush had returned to New Jersey with Carlos, who only stayed a short time before going back to Mexico. They agreed that she would save up enough money to buy a van and meet him there.

In the summer of 1968, she drove her newly purchased Dodge van cross country to California with a friend, whom she dropped off in San Francisco. She planned to drive to Phoenix, Arizona, but her $850 stereo was stolen out of the vehicle the night before she was supposed to leave.

After finding a replacement stereo in San Jose, she came across a pregnant woman who was holding up a sign that said ‘Los Angeles.’ Wildebush offered to give her and the two men she was with a ride.

The hitchhiker was Manson Family member Susan ‘Sadie’ Atkins, who would later be convicted for her participation in the Tate-LaBianca murders.

Wildebush said that as soon as Atkins got into the van, ‘she starts telling me about “the Family” and how they’re a band, how they sang with the Beach Boys. I liked her right away.’

She drove them to Spahn Ranch in San Fernando Valley, where Manson lived with his commune following his stays at a flophouse in the Topanga Canyon area and Beach Boy Dennis Wilson’s Pacific Palisades home.

Atkins asked Wildebush to spend the night, telling her that she couldn’t wait for her ‘to meet Charlie.’ When she saw the cult leader for the first time, he was walking out of a trailer naked with one of his lovers.

She told The Daily Beast that they were warm and welcomed her with a joint and an offer of some tea. She felt a connection with them because they shared her values and weren’t concerned with material wealth.

Manson invited himself into her van that night when everyone else went to bed, but she turned him down.

‘Well, now you’re just being selfish,’ he told her. ‘But we’re gonna fix that.’ 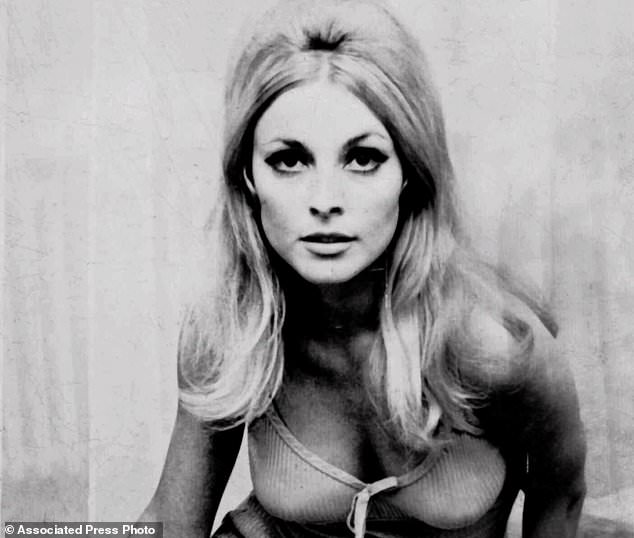 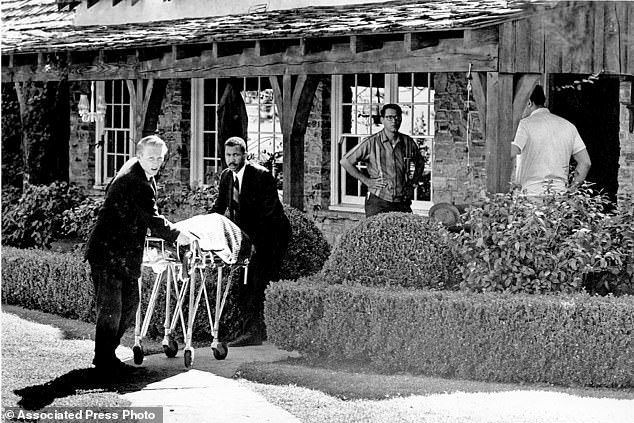 Crime vicim: Tate’s body is pictured being taken from her rented house on Cielo Drive in the Bel-Air area of Los Angeles after the murders

He greeted her in her van with coffee the next morning and showed her around the ‘magical’ horse property, which sometimes served as a movie set. The longer she spent with the Manson Family, the less interested she was in leaving and meeting Carlos in Mexico.

Wildebush, who was 24 at the time, didn’t avoid Manson’s advances for long. She recalled how Atkins and Steven ‘Clem’ Grogan had paired off in her van one day, leaving her alone with Manson.

After he kissed her, she asked, “What about Carlos?’ prompting Manson to giggle.

‘You don’t need to worry about Carlos, because I am him, and he is me,’ he said before making love to her in the back of the van.

Grogan and Atkins were having sex above them at the same time, and Manson invited them to join him and Wildebush.

Later that night, she agreed to give Manson her van and the $14,000 she had in a trust fund account.

In November 1968, the Manson Family packed up and headed to Meyers Ranch in Goler Canyon in Death Valley, but they ended up staying at the nearby Barker Ranch, which had more space.

Manson and his followers had returned to Spahn Ranch in March 1969 to prepare for the ‘race war’ he had predicted and called ‘Helter Skelter’ after a song on the Beatles’ White Album.

However, Wildebush and 19-year-old Brooks Poston were left at Barker Ranch to watch the place. After being there by themselves for three months, they met gold prospectors Paul Crockett and Bob Berry showed up looking for a place to stay. 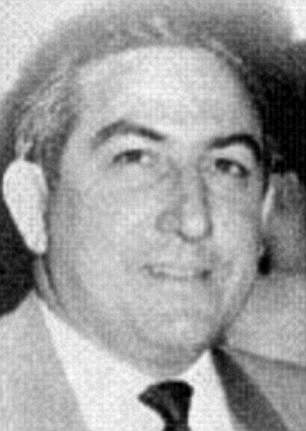 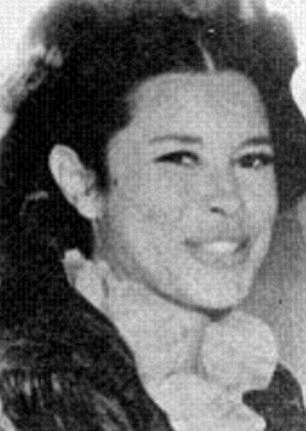 Killing spree: The following night, the same group — together with Leslie Van Houten and Manson — murdered Leno and Rosemary LaBianca in their home in Los Feliz, Los Angeles 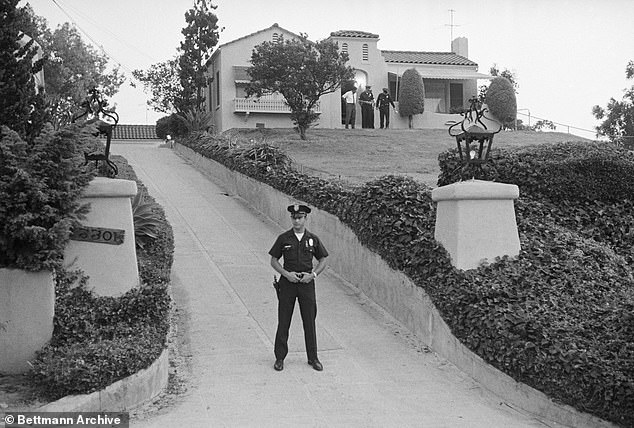 Scary: Wildebush said she has ‘survivor’s guilt’ because she likely would have participated in the murders if she was with them. A police officer is pictured blocking the  LaBiancas’ driveway

Crocket and Berry offered them food and started sleeping in the ‘bunkhouse’ off the main house at the ranch. While Wildebush and Poston were worried about how they would get rid of their unexpected guests before Manson returned, they also enjoyed their company.

They would have dinner together and sing songs while Poston played the guitar. Crocket could tell they were afraid of Manson and ‘outsiders’ at Barker Ranch. He had them visualize an arch of energy at the base of Golar Canyon that says ‘all those who pass this point must be prepared to pay their karmic debts.’

Wildebush said that for a while people stopped coming to Barker Ranch. She was later told that Manson had tried to come up a number of times but couldn’t make it.

The power Manson had over them started to wane, and they took interest in Crocket and Berry’s gold prospecting excursions. Wildebush eventually became romantically involved with Berry.

When Family members ‘Little’ Paul Watkins and Barbara Hoyt went to the ranch to get Wildebush and Poston, they revealed that they were decided to leave the family.

Watkins tried to warn Crocket about the impending upcoming race war, but it was of little concern to the prospector. Like Wildebush and Poston, Watkins started to think Crocket had more powers than Manson and considered deflecting as well, but he had promised the Family’s leader he would come back.

‘When he was leaving, we said, (Little) Paul, will you do us a favor? Some evening when Charlie and everybody are together in the living room, would you tell Charlie that we want him to release us from all agreements implied or direct? And we will do the same for him,’ Wildebush said.

‘And so Little Paul, I guess, went back and did it, and Charlie said something like, “That’s fine. I don’t care.”‘ 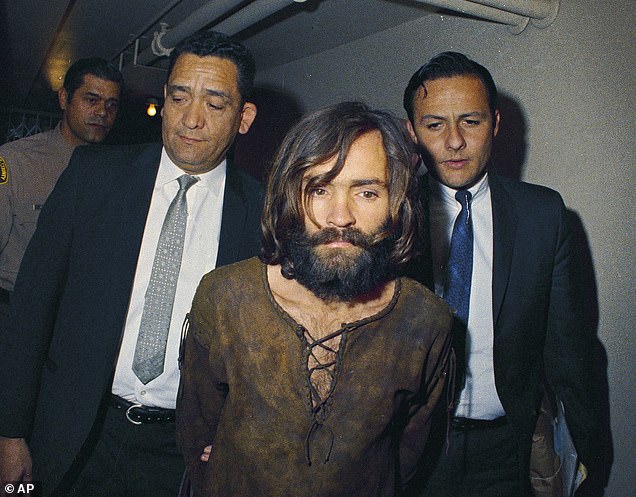 Instinct:  Wildebush knew Manson and the Family were behind the murders the moment she heard about them on the news, months before they were linked to the crime 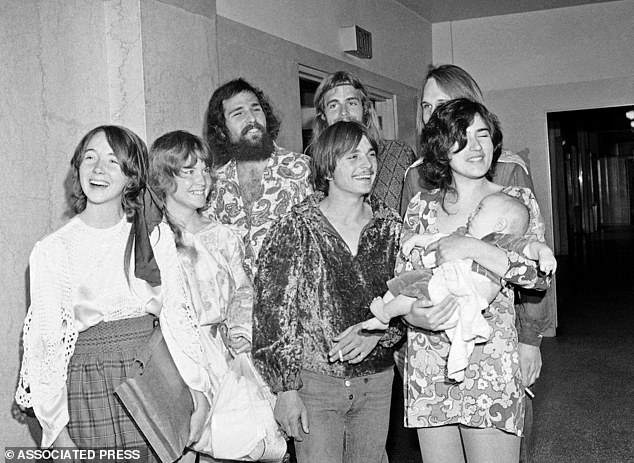 Blinded: Many of Manson’s followers remained devoted to him while he was on trial. Lynette ‘Squeaky’ Fromme, Sandra Good, Mark Ross, Paul Watkins, and Catherine ‘Gypsy’ Share are pictured in 1970 (left to right) 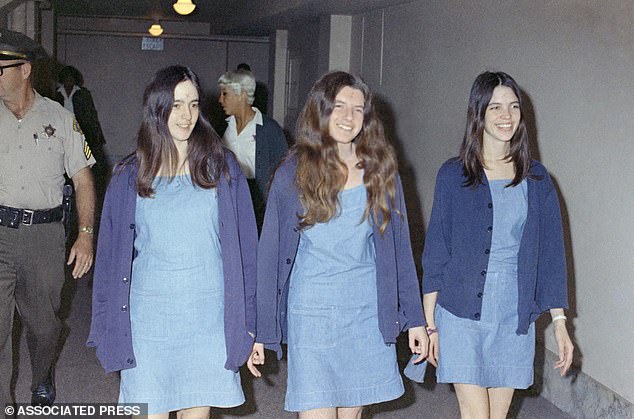 Murders: Wildebush was friends with Susan Atkins, Patricia Krenwinkel, and Leslie Van Houten (pictured left to right), who were all convicted and sentenced to life in prison

They also killed three of Tate’s friends — Jay Sebring, Abigail Folger, and Voytek Frykowski — and Steven Parent, an 18-year-old man who was visiting the caretaker of the estate.

The following night, the same group of young followers — together with Leslie Van Houten and Manson — murdered Leno and Rosemary LaBianca in their home in Los Feliz, Los Angeles.

Wildebush, who had married Berry, knew Manson and the Family were behind the murders the moment she heard about them on the news, months before they were linked to the crime.

Manson, Watson, Krenwinkel, Kasabian, and Atkins were sentenced to death after being convicted of the murders, but after the Supreme Court of California ruled that the death penalty was unconstitutional, their sentences were commuted to life in prison.

Watson, Krenwinkel, and Kasabian all remain in prison after being denied parole over a dozen times each. Both Atkins and Manson died in prison in 2009 and 2017, respectively.

Wildebush went on to lead a relatively normal life as a licensed therapist. She stayed married to Berry up until his death two years ago. Their one son has children of his own, and she is now a retired grandma.

She told The Daily Beast that has struggled with knowing that she could have been a part of the murders and considered visiting Atkins in prison, but her therapist convinced her not to do it.

‘That’s what the survivor’s guilt was about. I had no doubt that had I been there, I would have done (the same thing),’ she said. Sadie (Atkins) and Leslie (Van Houten) were the people I felt the closest to,” she tells me candidly. She even admits that she considered visiting Sadie in prison at one point, though her therapist talked her out of it.