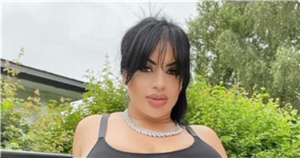 Model Lissa Aires has braved the British weather in a swimsuit – and admitted it was a bit cold.

The bombshell, who claims to have the 'biggest butt on OnlyFans' showed off her curves in a skimpy black swimsuit as she took a dip in a hot tub while in London.

And it seemed like she needed to turn the temperature up a bit higher as the stunner admitted she was a bit "nippy".

The 39-year-old flaunted her figure as she posed seductively on the edge of the tub.

As well as her curves, she also put an intimate tattoo on show, as well as an inking on her thigh.

Meanwhile, her dark locks were tied back in a chic ponytail, probably so she didn't get her locks wet in the tub.

Captioning the post, she teased: "Nippy weather in L town."

Fans with loving the cheeky snaps, with them racking up more than 19,000 likes.

One branded the model "beautiful", while another simply exclaimed: "Wow."

Lissa often thrills her fans with her sexy snaps.

She recently flaunted her rear in teeny shorts as the British weather was a bit sunnier earlier this month.

The model declared it's "Daisy Dukes weather" as she posed in tiny denim hot pants.

She then asked her two million followers: "What would you say to me if you saw me walking down the street?"

While another cheeky follower, responded: "I’m gonna need to hug you just like them shorts."

Lissa claims to have spent over £40,000 on her all-body transformation.

Her main focus was to achieve the "biggest butt" on OnlyFans, something she now claims to have accomplished.

Talking last year, she said: "I want to have the best shape to take the photos, so I invested heavily.

"I always had curves, but I also always wanted to have the biggest bum.

"So I took the opportunity to remove all the fat from other parts of the body to put it where I really wanted."