Moulin Rouge! The Musical will hold its long-awaited Australian opening night on November 12.

Melbourne will be the second city in the world to stage the musical that wowed Broadway and swept the Tony Awards, pipping London’s West End curtain-raiser by just hours.

The city can also claim the title of the globe’s biggest production of the musical adapted from the Baz Luhrmann film, with designers confirming that the Regent Theatre stage is larger than those in the other two capital cities to host the show. 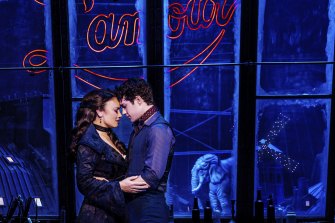 “To be able to finally say that we are opening the show actually makes me quite emotional,” said Alinta Chidzey, who stars as Satine. “The energy we all feel on stage as we rehearse this spectacular is like nothing I’ve experienced before. The show is a true feast for the senses and exactly what Melbourne needs right now to lift our lockdown spirits.”

Producers were forced by lockdowns and rehearsal restrictions to keep the show on ice, missing its original August 13 premiere date. 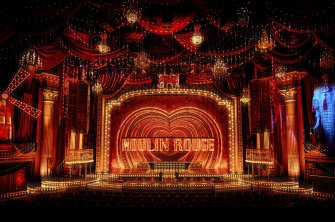 Moulin Rouge! The Musical at the Regent Theatre.Credit:Michelle Grace Hunder

They have been on tenterhooks as the Victorian government’s health officers assessed an application to open at a capacity that would make the production financially viable.

While details are still being hammered out, The Age understands the venue will open with at least 1000 fully vaccinated audience members – about half the room – and potentially more, aiming for full houses before the end of the year.

A government spokesperson confirmed the rule for the next stage of reopening was a maximum capacity of 1000, with density limits in non-seated indoor areas such as foyers and bars.

Producers have also decided to do away with the standard red carpet opening night of celebrities, VIPs and influencers. They want to honour, as much as possible, the tickets of the long-suffering public who flocked to book seats in record numbers in February, for performances that were postponed or cancelled.

Set designer Derek McLane was one of those collecting an award. He says that, if New York is a guide, there will be extra energy to the first performances in Melbourne.

“The excitement in the [Broadway] theatre is visible and palpable,” he said, over Zoom from London where the company is getting ready to open the show on the same date as Melbourne. “Our first performance back [from the pandemic shutdown] was unlike anything I’ve ever seen before. It was stopped by something like 10 or 11 standing ovations – I think the opening number had four standing ovations alone.

“It was such a crazy, euphoric celebration… the triumph of seeing a full theatre of people and seeing the show again was absolutely thrilling.”

There have been strict controls on access to the Regent Theatre so set builders and rehearsals could maintain a COVID-safe “bubble” – few have been inside to see the finished product.

McLane said it was bigger than both the New York and London stages, though the difference wasn’t vast. What was “more cool” about the Regent, he said, was the beauty of the theatre, the design of which fits the period of the film more closely.

“It lends itself to becoming the Moulin Rouge, it feels more European, the architecture feels closer to 1899 and it has a lot of opulence to it, which is really useful.”

He had less work to do to get patrons in the mood for the show – though they have installed a startling number of chandeliers.

“The idea is that when you come on this is not just scenery. There is music and there are performers in the auditorium. You feel like you’ve just been given entrée into this crazy, decadent club which is the Moulin Rouge. And we wanted to create that experience as much as possible as they walked through the doors.”

The set is flanked by two huge scene-setters, a big red windmill and a big blue elephant (hewn from Styrofoam with a chainsaw and shipped from New York). But the hardest part of his job, says McLane, was being confronted with a stage direction saying that, after Satine and Christian fall in love, “they fly out over the streets of Paris” and end the first act.

“I spent a lot of time scratching my head over that. I mean, how do you do that, in a way that feels magical and surprising?”

Tickets for Moulin Rouge! The Musical are on sale through to April 7, 2022