Warning: This story contains the name and images of a deceased Indigenous person. David Dalaithngu’s name and image have been reproduced with his family’s consent. His family has requested he be referred to as Dalaithngu rather than his more commonly-known name.

He gave us more than we ever gave him back. He had everything he needed to become a star and not enough of what he needed to cope with stardom. When he first appeared on screen in 1971, his presence was a challenge to white Australian stereotypes about Indigenous Australians. He was beautiful, fearless and self-possessed, at a time when Indigenous actors were largely invisible on our screens. That beauty was radical, a heavy weight to carry, and yet he did carry it for more than 50 years, as a man astride two cultures. His career in movies is longer than any other Australian actor except Jack Thompson – and what a career!

He was, he thought, about 14 when Nicolas Roeg, director of scary English art movies including Don’t Look Now, discovered him on a casting trip through Arnhem Land. Roeg started as a cinematographer and he was the first to recognise the rapport between David Dalaithngu, as his family asked that we call him after his death, and the lens.

Walkabout (1971) captured him at his physical peak – lean, graceful, walking softly on the land as though he was both spirit and hunter. The sexual tension of that movie was a shock to white audiences. As a white schoolgirl stranded in the desert with her little brother, Jenny Agutter’s character nearly went mad trying to reconcile her fear and attraction, a perfect metaphor for white Australia’s troubled relationship with Indigenous culture. Her denial of him lead to his suicide in the film, reflecting the death of innocence. 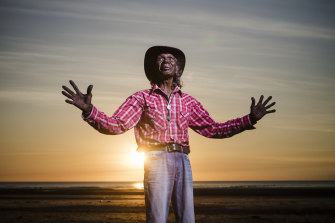 I think I was 15 when I saw this at a school screening – and it has remained fresh in my mind ever since. This was not just the film that kickstarted our national film industry – it was the film that required us to sit up and take notice of a culture we barely knew existed.

He would play more earthly roles later, but there was always a sense that he was no mere mortal. Part of that was his comfort with being looked at. He knew he was beautiful and equipped to mesmerise, courtesy of a bush upbringing where his father taught him to dance and sing and paint in the traditions of the Yolngu people. He was proud of that heritage and confident about showing it to the world, whether at Cannes Film Festival or Buckingham Palace. 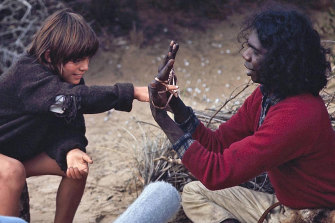 Older Australians will remember his lonely figure, rifle at the ready, striding across the Coorong marshes in Storm Boy (1976). As Fingerbone Bill, he was now older, wilder, a little more threatening, except to the boy who loved pelicans (Greg Rowe). There was more militant dialogue: he was ready to protect this land with force if necessary.

In his early years, there was always this on-screen tension between the natural man and the modern man. Nobody until Paul Hogan took advantage of his innate humour. The jokes in Crocodile Dundee were about his image, already well-established, as the carrier of the culture, the Indigenous Australian actor. His character was called Neville Bell, rather than an Indigenous name. In its own way, this was a reconciliation role – but on white terms that implied he had to give up some of his Aboriginality to fit in.

In 2002, he played a tracker in two distinctive movies that signalled a new stage in his career. Phillip Noyce directed him superbly in Rabbit Proof Fence as Moodoo the tracker, where his centre-parted hair was a sign of the conflict of his role. In Rolf de Heer’s The Tracker, he was everything that Gary Sweet’s fanatical white policeman feared: unknowable, ungovernable, undefeatable. These roles interrogated the past in a much more explicit way, using the actor’s silence as a terrifying glimpse on-screen of Indigenous Australian rage.

In his last role, My Name is Gulpilil, a collaboration with Molly Reynolds and de Heer, he announced to the world that he was dying and invited us to hear his story, told his way. It was a rare and moving summation of the man, not just his career but his struggles with drugs, alcohol, jail, and the pressures of success. He was characteristically frank about his weakening body and yet still as graceful as ever. That film premiered last May, and it was a fitting acknowledgement of both his career and his complexity as a man. It ended with him telling us what would happen when he died – his spirit would return “to the waterhole where I was born”. No actor, black or white, brought so many gifts to the Australian screen for so long. No actor will be so sorely missed. He gave us more than we ever could give him back.