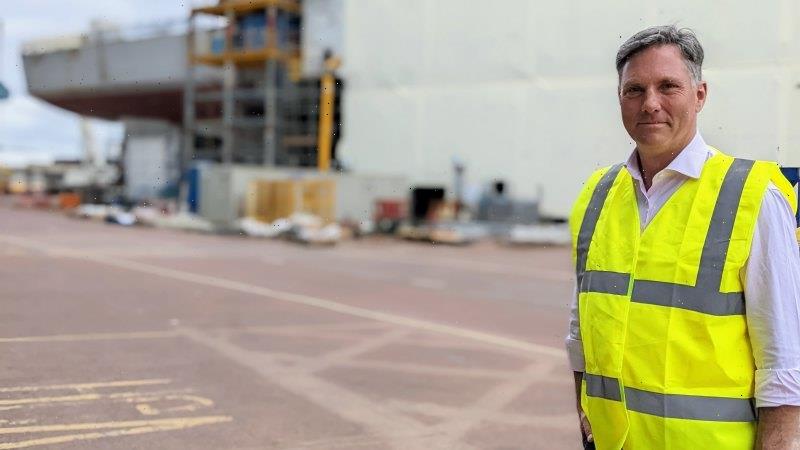 Glasgow: Defence Minister Richard Marles has refused to say if the federal government will appoint a High Commissioner to the UK by the end of the year, even though the countries are in critical negotiations over the acquisition of nuclear submarines under the AUKUS agreement.

Marles will on Wednesday, UK time, visit BAE’s shipyards in Barrow, in England’s north, where the nuclear-powered Astute-class submarines are made, amid growing expectations Australia’s first nuclear submarines will be bought “off-the-shelf” from either Britain or the US, but most likely from the Americans. 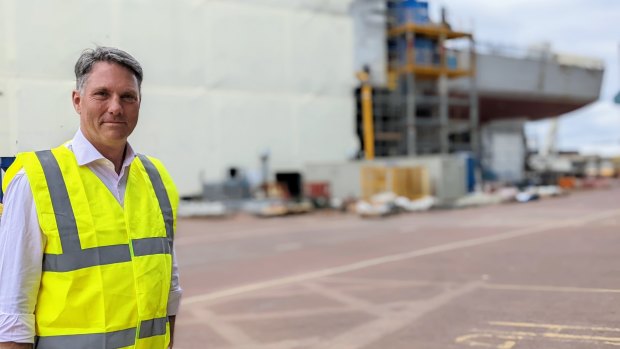 Defence Minister Richard Marles visiting BAE’s Govan shipyards in Glasgow, Scotland on Wednesday, August 21, 2022 where the first of the Type 26 frigate is being built.Credit:Latika Bourke

On Tuesday he visited BAE’s shipyards in Govan, Glasgow, where he urged the company to get “back on track” with the program to supply Australia’s new Hunter class of frigates.

Marles, also the deputy prime minister, is on the first official visit to the United Kingdom by any minister from the new government after the May election and Australia has not had a High Commissioner in the UK since April, when former attorney-general George Brandis’ term expired. The Coalition did not extend his term ahead of the election.

The vacancy is being looked after temporarily by career diplomat Lynette Wood who is fluent in Japanese and widely regarded as a frontrunner to be sent to Tokyo.

The government has appointed bureaucrats as ambassadors to several countries since its election but left the London post vacant. Asked if Australia would have a High Commissioner in place in London by the end of the year, Marles would only guarantee that one would be sent “in due course”.

The new cabinet, led by Prime Minister Anthony Albanese, has made global diplomacy central to restoring Australia’s reputation abroad, with ministers bombarding the Asia-Pacific region, Europe and the United States with official visits. However, Britain has been left off the itinerary, until now, and the Labor has moved to build public support to cut ties with the monarchy with the appointment of the inaugural minister for a republic, Matt Thistlethwaite.

Marles, who represented the prime minister at the recent Commonwealth Heads of Government meeting in Rwanda, said the relatively late visit was “certainly not” a snub. “We’re here now,” he said.

Marles pointed to the Tory leadership contest, triggered last month, as one of the reasons the government had kept away.

“There’s a process that Britain is going through as we speak,” he told The Sydney Morning Herald and The Age in an interview after dining with his UK defence counterpart Ben Wallace.

“We see the relationship with Britain as being very central to our national interest and our world view. We have will have a very intense and ongoing agenda with Britain; Britain is our oldest relationship,” he said.

Marles’ Europe visit began in Germany on Monday and will end in France on Thursday as part of the new government’s ongoing efforts to mend relations with the country, after Scott Morrison reneged on a $90 billion submarine contract to sign the AUKUS agreement.

Marles said Germany had agreed for the first time to send German troops to take part in war games alongside Australia and its allies next year.

Germany’s air force is currently taking part in exercises in Darwin and has sent its frigate to the region as well, but next year’s plan to take part in Operation Talisman Sabre will be the first time troops have taken part in war games alongside Australia and its allies.

Marles welcomed Germany’s “remarkable shift” in foreign policy which had taken place in the aftermath of Russia’s invasion of Ukraine.

Chancellor Olaf Scholz, said this week that Germany would invest in new relationships to diversify away from China, having outlined his country’s attempts to de-link its gas supply from Russia.

Get a note directly from our foreign correspondents on what’s making headlines around the world. Sign up for the weekly What in the World newsletter here.