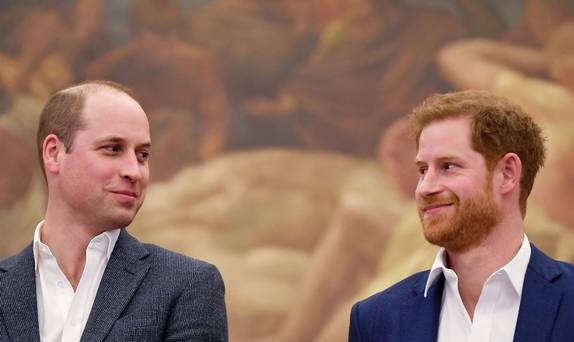 It wasn’t so long ago that they were collectively known as the Fab Four: the ambitious, photogenic and energetic quartet that were breathing new life in the musty monarchy. Somehow, Princes William and Harry and their respective wives, Kate Middleton and Meghan Markle, seemed all the more wonderful when they were together.

Yet it was a new era for the royals that proved short-lived, as rumours of a rift between the four began to surface. And this weekend’s broadcast of the documentary Harry & Meghan: An African Journey did little to suppress such speculation.

In a candid interview, Harry was asked about whether the rumours of tension were true.

“Part of this role, part of this job and this family being under the pressure it is under, inevitably stuff happens,” he replied.

He added: “We don’t see each other as much as we used to because we are so busy but I love him dearly and the majority of stuff is created out of nothing. As brothers, you have good days, you have bad days.”

Despite Buckingham Palace downplaying the reports, speculation about the state of William and Harry’s relationship has been a long time growing. A year ago, the Sunday Times reported that the princes were actively ditching the double act that they’ve long enjoyed since boyhood. Both princes put into place a division of their Kensington Palace household, resulting in Harry and Meghan decamping to, and famously revamping, Frogmore Cottage. It was rumoured that both brothers now work with separate staff and offices and on separate charities, with one source telling the newspaper: “There is a gulf in the style and approach to the type of work that William and Kate will increasingly do as future head of state and consort, and Harry and Meghan, who have more of a blank canvas with their roles… William and Harry’s double act has naturally been supplanted by the two couples and their families… They have become different people with different outlooks on life. Splitting the household is the obvious thing to do.”

Royal biographer Sally Bedell Smith then appeared to confirm this to Vanity Fair: “I had heard that a division might be on the cards, and that it had a lot to do with Meghan – not in a negative way, but that Meghan and Harry’s interests were moving in different directions [from William and Kate’s].”

Royal watchers have picked up on the strain, too. At recent public events, William and Meghan have kept their distance from each other and been stiffly formal in each other’s company: a far cry from the bonhomie of the Fab Four days. Apparently, the rift between the brothers first surfaced in the run-up to Harry’s wedding to Meghan last year. William allegedly expressed concern that Harry was moving too fast in his whirlwind romance. For his part, Harry had reportedly told William that he hadn’t supported his and Meghan’s big day, while Kate and Meghan also reportedly had a tearful falling out over Meghan’s choice of flower girl dress for Princess Charlotte. And Harry’s infamous uttering ‘what Meghan wants, Meghan gets’ can’t have helped matters between the two couples much, either.

In some ways, a parting for the brothers is perhaps inevitable: the death of their mother while they were both 15 and 12 would have cemented their closeness as youngsters, as would spending time together at Ludgrove and Eton boarding schools.

As they both noted in an interview for the Heads Together mental health charity, tragedy had a way of binding them together, and as Harry came to terms with the death of his mother when he was 28, it was William who tried to help him through it.

Yet as William now prepares himself for life on the throne, it stands to reason that there would be a natural parting between the two.

Diana’s former butler Paul Burrell also revealed the inner workings of royal dynamics on Good Morning Britain yesterday that both are on a completely different trajectory, with William heading “to the boardroom” and Prince Harry “to the factory floor”.

Jan Parker of the Association for Family Therapy and co-author of Raising Happy Brothers and Sisters, says that favouritism within a family, whether intentional or not, is agonising for all involved. The child who appears to be the most loved can feel utterly bereft at being ostracised by his or her siblings. “The ‘favourite’ can be in as much pain as anyone else, but their story is seldom told. It can be a lonely place to be, especially when they grow older. Our sibling relationships are very often the longest relationships of our lives and to be estranged from our brothers and sisters is a very uncomfortable position to be in.”

Owen Connolly, consultant psychologist at the Connolly Counselling Centre in Stillorgan notes that the princes’ differing personalities, coupled with the enormity of pressures that they both face, was likely to be a recipe for tension.

“You have Harry, this young buck who married outside of the norm and was outside of the norm in everything he did,” he says. “He always seemed to act the tough guy but is the softest of the two and was most affected by the death of his mother. William had to put on a stiff upper lip and as a future king, he has had to put in an incredible ‘acting’ performance. It’s probably very difficult for the two of them to relate to each other.”

Yet as major life events take place, it’s not unusual for siblings to drift apart and assume a rivalry – royal or not.

“Overt rivalry in childhood is upfront, dynamic and character-building, a necessary rite of passage that enables each child to find their niche within the family,” explains psychologist Dr Malie Coyne. “But sibling envy in adulthood is a stagnant, secretive emotion that finds its insidious expression in anger and deep resentment. Sibling rivalry extending into adulthood is more likely to happen if it goes unchecked in childhood.”

Occasionally, notes Coyne, warring siblings need professional help to get themselves back on track. “Seek help for sibling conflict if it is so severe that it is leading to marital problems or problematic family relationships, or if it creates a real danger of physical harm to any family member,” she advises. “Seek help, too, if it’s damaging to the self-esteem or psychological wellbeing of any family member.”

Connolly, meanwhile, offers a simple solution to keep sibling rivalry at bay in the average home, from even an early age: “One thing I tell parents is that you need to have a sense of the order in the house. When adults come into the house and greet the baby first, for instance, you create jealousy and differences. If you greet the oldest child first and work your way down, this stops the rivalry. It’s important to let them know they are all loved, but that their position in the house is also recognised.”