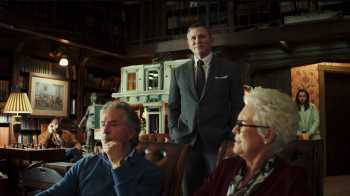 The search for whodunnit begins in the first look at director Rian Johnson’s upcoming drama “Knives Out.”

In the trailer for the star-studded murder mystery, everyone is a suspect. After a wealthy patriarch and renowned crime novelist Harlan Thrombey (Christopher Plummer) is found dead at his 85th birthday party, two detectives (Daniel Craig and Lakeith Stanfield) take center stage to investigate the mysterious death. However, things get hairier once a supporting cast of seedy characters emerges, including a foul mouthed Chris Evans who repeatedly tells his family to “eat sh—.”

“Ladies and gentleman, I would like to request you all stay until the investigation is completed,” Craig’s character tells the family.

Toni Collette’s character prods, “Can we ask why? Has something changed.”

Later in the footage he concludes, “I suspect foul play, and I’ve eliminated no suspects.”

Lionsgate’s “Knives Out” is set to hit theaters on Nov. 27.