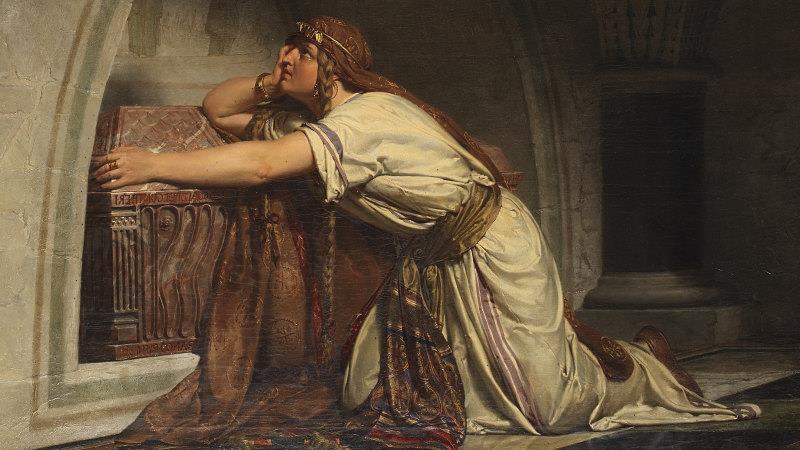 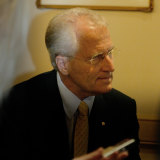 As an 18-year-old cabin steward, he jumped ship in Sydney in 1957 to avoid military service at home before founding Tempo, an industrial cleaning company that by 2002 had made him a fortune of more than $200 million.

By then, Schaeffer owned two of Sydney’s most prestigious and historic homes: Boomerang (overlooking Elizabeth Bay, which he bought for a then-record price of $20 million) and Rona (the neo-Gothic Bellevue Hill mansion he was forced to sell for $25 million in 2004 when Tempo could have gone belly-up).

His death in 2020, at the age of 79, occurred when he was knocked over in Macquarie Street, Sydney’s most historic thoroughfare, by a reversing ute.

During his lifetime, Schaeffer shared his passion for art – particularly the much-maligned Pre-Raphaelite movement, which prospered in Britain for a few decades in the 19th century, returning to classical/Biblical subjects embraced by Michelangelo and Raphael. 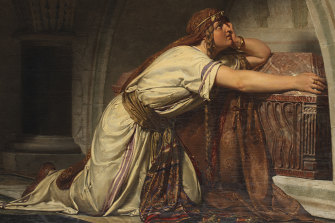 Clotilde at the Tomb of her Grandchildren is likely to fetch the top price.Credit:Bonhams

Many of the most valuable paintings Schaeffer collected are now in Australia’s leading galleries, donated to be enjoyed by fellow Australians.

What remains of Schaeffer’s collection will be auctioned in London on December 14 attracting attention from collectors worldwide, according to Charlie Thomas, Bonham’s director of private collections and house sales.

Clotilde at the Tomb of her Grandchildren, by Dutch-born artist Sir Lawrence Alma-Tadema, is likely to reach the top price up to $110,000.

“Clotilde was the Christian wife of Clovis, King of the Franks from 465-511,” Thomas says. “She converted Clovis from paganism to Christianity and is considered responsible for the spread of Christianity within Western Europe. ”

Alma-Tadema’s canvas, first exhibited in Antwerp in 1858 before he moved to England in 1870, depicts Clotilde mourning her murdered grandchildren, slaughtered by their uncles in a battle for Gaul’s throne after Clovis’ death.

“Alma-Tadema was a classical artist rather than a Pre-Raphaelite,” Thomas says. “His works are characterised by their classical subject matter and idealised figures.

“Along with Lord Leighton, he is regarded as the supreme artist in this movement, and one of the most popular Victorian painters of his age.”

Schaeffer’s favourite artist, Lord Leighton, is represented in the auction by a portrait and two sculptures.

The Australian philanthropist helped pay for the restoration of Leighton House in London’s Holland Park, now a museum famed for its elaborate “oriental” interiors.

“John was an incredibly generous patron to the arts,” Thomas says. “He was a true collector, passionate about his subject matter and incredibly knowledgeable about it. But most of all he bought what he loved.”

Part of the auction, stretching from lot 226-349, demonstrates Schaeffer’s interests were far wider than the Pre-Raphaelites. There are rondels, busts of William of Orange and Byron, a 2nd century head of a bearded god “possibly Zeus” and a rare collection of Coade stone – all attracting international attention.

Not a bad artistic legacy for a former penniless cabin steward who jumped ship.