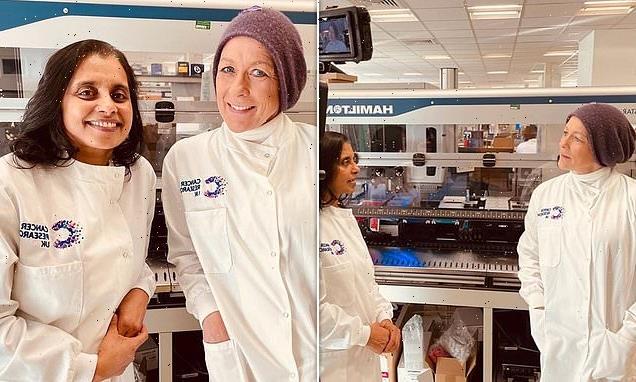 Sarah Beeny donned a Cancer Research UK lab coat as she joined a professor to discuss the future of breast cancer treatment.

The presenter and property expert, 51, was joined by a film crew as she chatted to the professor of Precision Breast Cancer Medicine Jean Abraham at Cambridge University.

It comes amid the star’s battle with breast cancer, after sharing in August 2022 that she had been diagnosed, and finishing her last session of chemotherapy just last week.

Wearing a Cancer Research UK white medical lab coat for the fascinating discussion, the TV star teamed it with a cashmere beanie from brand Plum & Ivory. 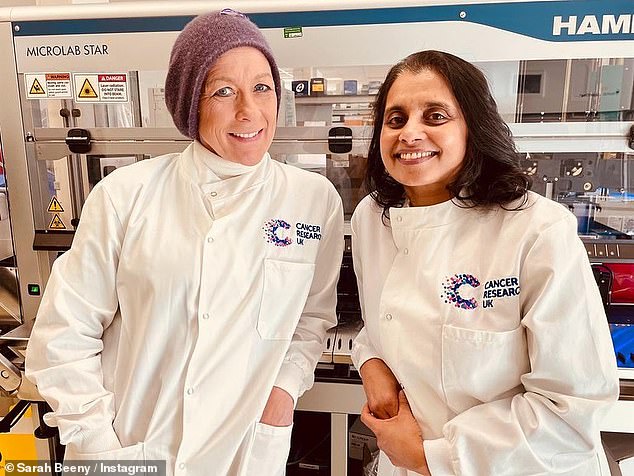 Sarah spoke with Professor Jean Abraham about the future of breast cancer treatment at the Cambridge facility.

The 51-year-old, who was diagnosed with breast cancer last year, shared an image of herself and Professor Abraham on her Instagram.

She wrote the caption: ‘In Cambridge today having fascinating conversations with the brilliant Professor Jean Abraham about the future of breast cancer treatment. 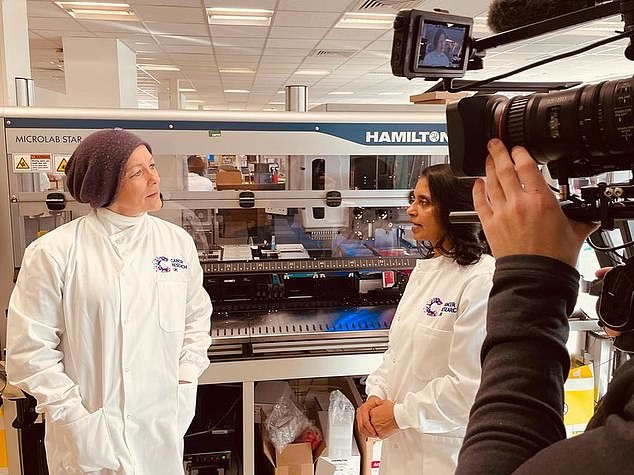 Sarah donned a Cancer Research UK white lab coat for the meeting. The two women were joined by a film crew

Taking to the comments section one person wrote: ‘You are just amazing and inspirational woman.’

While another added: ‘Well done Sarah, when you could have your feet up with hot choc and a book!’ A third said: ‘Amazing work from Cancer Research UK.’

Last month the Property Ladder star was praised by her fans as she visited the Institute of Cancer Research to learn about genetics amid her own battle with the disease.

She posed alongside the NHS consultant in clinical cancer genetics as she spent the morning at the institute. 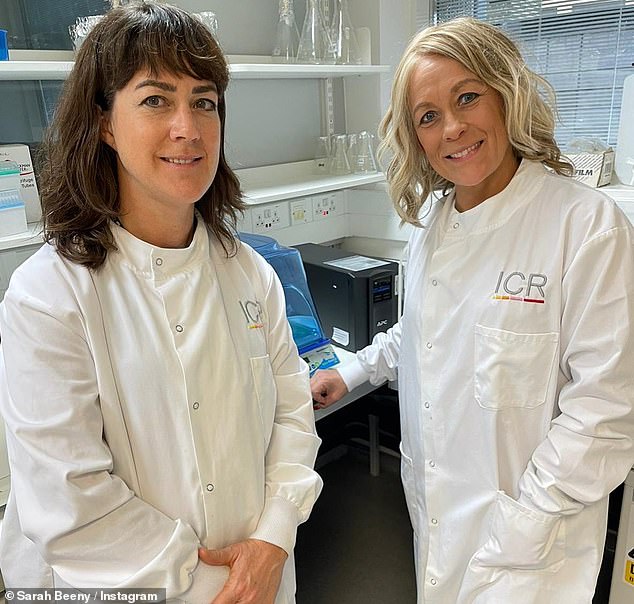 Sarah, who was diagnosed with breast cancer in July, was praised yet again by her 300,000 followers as ‘amazing’ and an ‘inspiration’ for raising awareness for cancer research.

Sarah has admitted that she spent decades worrying that she would get breast cancer before her diagnosis after her mother died from the disease.

Sarah’s mother Ann tragically died from cancer 40 years ago at the age of 39, when Sarah was just 10 years old.

Appearing on Loose Women in November 2022, to speak on TV for the first time since her diagnosis, Sarah said she spent decades ‘waiting’ to get breast cancer after her mother’s battle with the disease.

Explaining how she spent decades worrying about cancer, Sarah said: ‘My mum died when I was 10 and I’ve just always assumed that I would get breast cancer. 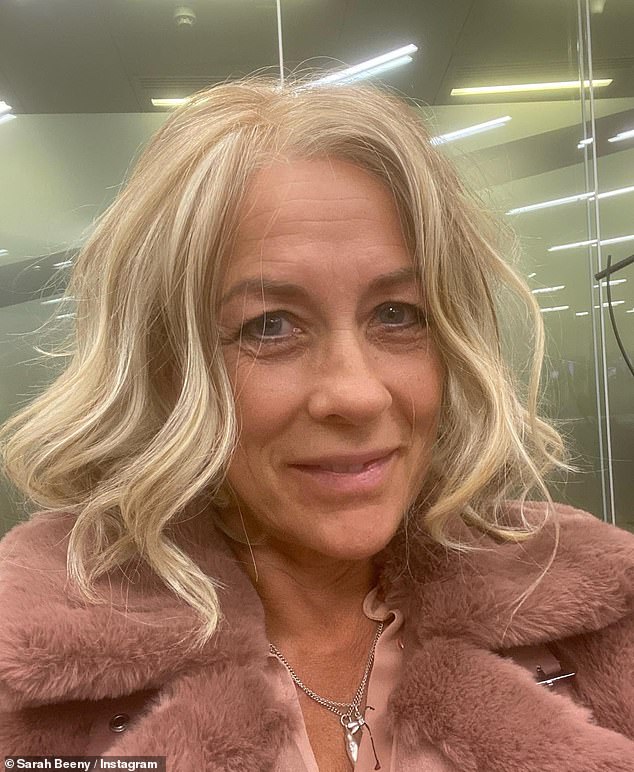 Sarah, who was diagnosed with breast cancer in July, was praised yet again by her 300,000 followers as ‘amazing’ and an ‘inspiration’ for raising awareness for cancer research

‘So 40 was a bit of a bumpy moment, because I wasn’t sure what you do at 40 when you’re not dead. Then life went on and then I hit 50 and then I was diagnosed, and I thought, ‘Oh there it is. It was just waiting’.’

Reflecting on finding a lump on her breast, Sarah said it was initially dismissed as nothing to worry about, until she returned to the doctors to get it checked a few months later.

‘My mission, that I would like everyone to know, is that you should trust your own body,’ she said.

In September, Sarah started chemotherapy and lost her hair after her four sons – Billy, 18, Charlie, 16, Rafferty, 14, and Laurie, 12 – had already chopped her shoulder-length hair to a shorter crop.

Sarah is currently filming a documentary about cancer and specifically her mother’s diagnosis 40 years ago, looking at how much treatment has improved since then.

What is breast cancer?

Breast cancer develops from a cancerous cell which develops in the lining of a duct or lobule in one of the breasts.

When the breast cancer has spread into surrounding breast tissue it is called an ‘invasive’ breast cancer. Some people are diagnosed with ‘carcinoma in situ’, where no cancer cells have grown beyond the duct or lobule.

Most cases develop in women over the age of 50 but younger women are sometimes affected. Breast cancer can develop in men though this is rare.

Staging means how big the cancer is and whether it has spread. Stage 1 is the earliest stage and stage 4 means the cancer has spread to another part of the body.

The cancerous cells are graded from low, which means a slow growth, to high, which is fast growing. High grade cancers are more likely to come back after they have first been treated.

A cancerous tumour starts from one abnormal cell. The exact reason why a cell becomes cancerous is unclear. It is thought that something damages or alters certain genes in the cell. This makes the cell abnormal and multiply ‘out of control’.

Although breast cancer can develop for no apparent reason, there are some risk factors that can increase the chance of developing breast cancer, such as genetics.

What are the symptoms of breast cancer?

The usual first symptom is a painless lump in the breast, although most breast lumps are not cancerous and are fluid filled cysts, which are benign.

The first place that breast cancer usually spreads to is the lymph nodes in the armpit. If this occurs you will develop a swelling or lump in an armpit.

How is breast cancer diagnosed?

If you are confirmed to have breast cancer, further tests may be needed to assess if it has spread. For example, blood tests, an ultrasound scan of the liver or a chest x-ray.

How is breast cancer treated?

Treatment options which may be considered include surgery, chemotherapy, radiotherapy and hormone treatment. Often a combination of two or more of these treatments are used.

How successful is treatment?

The outlook is best in those who are diagnosed when the cancer is still small, and has not spread. Surgical removal of a tumour in an early stage may then give a good chance of cure.

The routine mammography offered to women between the ages of 50 and 70 mean more breast cancers are being diagnosed and treated at an early stage.

For more information visit breastcancernow.org or call its free helpline on 0808 800 6000