Kristin Chenoweth plays against type as Mildred Layton, the villain of ‘Schmigadoon!’ The Tony award winner spoke to HL about her shining moment in episode 5.

You might know her as Glinda The Good Witch from her Tony-nominated role in Wicked, but Kristin Chenoweth is anything but good in the new Apple TV+ musical comedy Schmigadoon! “I jumped at the chance to play this role. Barry Sonnenfeld said he was going to allow me to play against type, and I knew what I wanted Mildred to be,” Kristin explained to HollywoodLife in an EXCLUSIVE interview. “I needed the ‘Joker’ maniacal lips, I needed that Mildred Pierce hair, I needed the too tight corset, and he let me go for it.”

And go for it, Kristin did, specifically in the most recent Aug. 6th episode, during which Mildred performs a juicy, 18-page operatic number called “Tribulation.” “Barry called and said, ‘You’re going to do this song ‘Tribulation.’ It is an 18 pager, patter and Opera, and he said, ‘You’re going do it in one take,” the Broadway vet recalled. “That’s how he got me. I love the opportunity to challenge myself.” 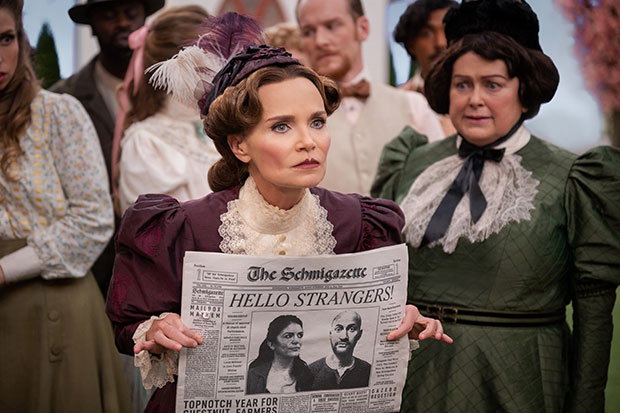 While filming for Schmigadoon! took place in the midst of the pandemic, Kristin prepared for her one-take wonder during her 14 days of quarantine. “Alan Cumming lived next to me during filming and in the middle of the night — I did not sleep — all I did was ‘Tribulation’ and 90 Day Fiancé,” she explained. “I would wake up and I would just see how far I could go. And each day, I just got better and better. I did it on the treadmill. The only thing I asked them for was if I could get a treadmill in the 14 day quarantine. And I would get on the treadmill and I would practice ‘Tribulation.’”

The song itself itemizes all the issues Mildred has with the town of Schmigadoon — promiscuity, depravity, stray peanut shells. According to Sonnenfeld, Kristin performed the song in its entirety during a table read and “when she finished, the whole room stood up and gave her a standing ovation.” 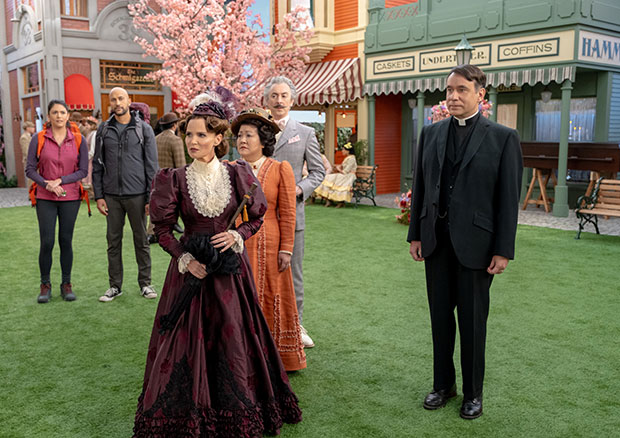 Fans of the show don’t know too much yet about why Mildred is as high-strung and conservative as she is, but Kristin developed a backstory of her own, in which she believes her villainous character was once like the town seductress, Betsy. “I think she got hurt along the way. I think she gave birth out of wedlock. I think she did a lot of things considered ‘wrong’ and she became this person,” she explained. “One of the things I really loved about playing her was that she would just appear. Just having her appear and be like, ‘Two rooms!’ or ‘Shoulders back Howard, like you have a spine!’ Those moments helped set up that 18 pager.” 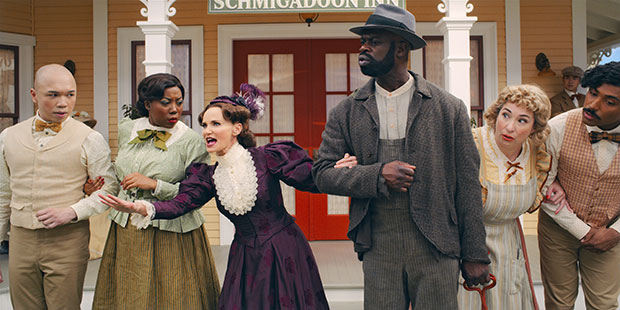 Kristin continued, “Melissa (Cecily Strong) and Josh (Keegan Michael Key) get to watch this absolutely bat-sh*t woman, and everybody learns something.”

Tune in to Schmigadoon! on Apple TV+, with new episodes dropping every Friday!