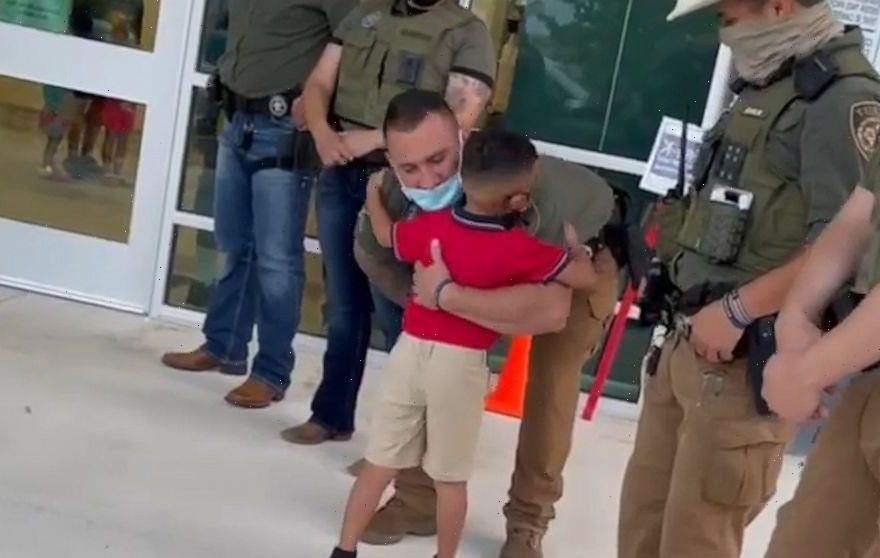 Officers from the Frio County Sheriff’s Office in Texas made sure a fallen comrade’s son felt all the love and support on his first day of school.

“We were proud to escort our little deputy to his first day of kindergarten. Although we still miss our brother in blue, Justin Longoria, every day, it’s these happy memories we want to continue to make for his children,” Chief Deputy Pedro Salinas told “Good Morning America.”

Last Monday, Joziah Longoria walked onto his school’s campus in San Antonio alongside his uncle, Frio County Lt. Josh Longoria, and shook hands and hugged other deputies as he headed into the building.

“The FCSO is now and will always be family to his young boys. Justin Longoria was an amazing young man and investigator,” Salinas said. “He loved serving his community and his loss has left our agency feeling incomplete. Being able to put a smile on his children’s faces allows us to feel whole once again be it ever so briefly. He will forever be missed.”

Justin Longoria — a Frio County corporal detective who was killed in a vehicle collision in April on his way to work — has been remembered as one of the department’s “brightest stars.”

Joziah’s mother, Leanne, thanked the deputies and Joziah’s uncle for the gesture.

“Moments like these make it hard but Justin and Joziah have a whole family behind him to make this easier,” she wrote on Facebook. “May God bless his year with all smiles and knowledge I know Justin is really happy and proud to see this.”

The sheriff’s office shared a video of the touching moment and photos on its official Facebook page which has racked up hundreds of views and likes.

Following her husband’s death earlier this year, Leanne posted a photo of him in uniform, leaning against a sheriff’s office vehicle, alongside young Joziah wearing a mock-up police uniform and standing next to a miniature toy police vehicle.

Before the untimely death, Joziah had pinned the Frio County lieutenant badge on his uncle during a ceremony, an act that Josh Longoria said meant a lot to him and his fiancé because of Joziah’s love for police officers. “Joziah often tells me that he wants to be a police officer as well,” Lt. Longoria said.