Bill Shorten has publicly backed the AstraZeneca coronavirus vaccine as a path out of lockdowns a day after Labor leader Anthony Albanese again declined an invitation to clarify his own stance on the jab.

The shadow spokesman for government services and former party leader declared the vaccine the “cure to getting out of lockdown” as he carried an Australian flag into the manufacturing site at CSL in Melbourne, where he met workers and posed for photographs.

“I’m here today to see the magic bullet to get out of lockdown, the AstraZeneca vaccine. I’m here to see how Australian made is going to break the lockdown and help stop the spread of COVID,” Mr Shorten said.

“I’ve had the jab you should get the jab so we can get out of lockdown.

“I back the science, I back Australian manufacturing … I’m backing AstraZeneca, because that is our quickest and best path out of lockdown.” 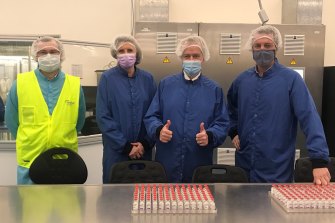 Labor has spent months attacking the government’s vaccine rollout, accusing it of not securing enough deals outside of Pfizer and AstraZeneca.

Concerns have been growing within Mr Albanese’s own party over his reluctance to publicly specifically back the AstraZeneca vaccine, used in over 170 countries.

With less than 15 per cent of Australians fully vaccinated, and the vast majority of the population not yet eligible to receive limited Pfizer doses, Mr Albanese has been repeatedly invited at media conferences to encourage take-up of AstraZeneca after access was opened to anyone over 18 through a GP with informed consent.

“Politicians shouldn’t be the ones giving health advice. Medical experts should,” Mr Albanese said on June 29.

The following day Mr Albanese was asked again if he would encourage under 40s who are not yet eligible for Pfizer to get the vaccine.

“I share the idea that we should be listening to medical advice,” Mr Albanese said.

In an opinion piece published in The Canberra Times on Friday, Mr Albanese said Scott Morrison “put his eggs in the AstraZeneca basket. With Australia at the back of the queue, the chickens are coming home to roost”.

He said Australia should be looking for excess supplies of alternative vaccines in other nations, starting with the United States.

Earlier this year the AstraZeneca vaccine was linked to rare instances of a blood clot disorder, TTS, which led Australia’s vaccine advisory group, ATAGI, to preference the Pfizer’s vaccine for people aged under 50, then later under 60.

That, coupled with the government’s own messaging, has led to hesitancy toward the AstraZeneca vaccine.

Last weekend, ATAGI changed its advice again to recommend adults in greater Sydney, where there is a growing COVID-19 outbreak, “should strongly consider the benefits of earlier protection with COVID-19 Vaccine AstraZeneca rather than waiting for alternative vaccines”.

As Nine News, The Age and The Sydney Morning Herald revealed on Thursday, Labor has preselected a vocal critic of AstraZeneca, infectious diseases expert and general physician Dr Michelle Ananda-Rajah, to run in the Victorian seat of Higgins.

The seat is held by fellow doctor, Liberal Katie Allen, who is a public supporter of the Astra Zeneca vaccine.

The AstraZeneca vaccine is less effective than Pfizer at stopping symptomatic COVID-19 infections but is extremely effective at preventing death and severe disease.

In a statement posted to social media on Friday Dr Ananda-Rajah defended her remarks.

“Australians should follow the official health advice when it comes to getting vaccinated,” she said, adding her comments on AstraZeneca “were entirely in line with available evidence and official advice of ATAGI as endorsed by the Prime Minister and federal government”.

“The biggest cause of AstraZeneca hesitancy has been the federal government’s poor handling of changing health advice. The blame for Australia’s slow vaccination rollout is on [Prime Minister] Scott Morrison and [Health Minister] Greg Hunt.”

Prime Minister Scott Morrison described the CSL-made vaccine as “a strong vaccine, it’s an effective vaccine. It’s the most recognised COVID vaccine in the world and it’s saved millions of lives.”

Mr Shorten on Friday said over 750 million people worldwide have had the AstraZeneca vaccine and encouraged people to get it if their doctor recommended it.

“AstraZeneca is part of the arsenal to break the back of COVID. We are making the path out of lockdown right here in Melbourne, Australian-made AstraZeneca,” he said.

Stay across the most crucial developments related to the pandemic with the Coronavirus Update. Sign up to receive the weekly newsletter.