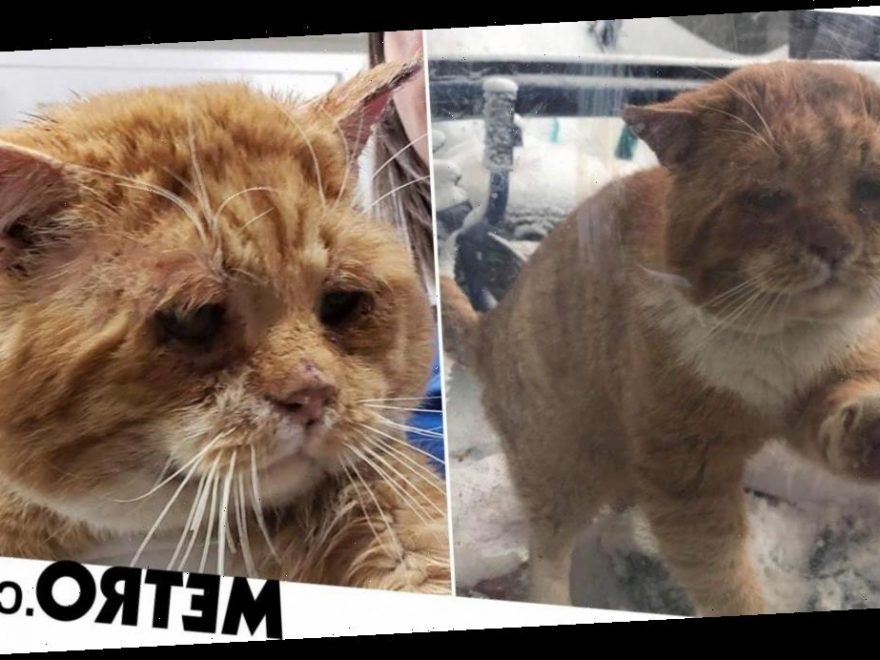 In Quebec, Canada, on Valentine’s Day last year, a woman heard a noise coming from the back of her house.

Upon inspection, she saw that there was a big orange cat pawing at her window in the snow, looking worse for wear.

She called her local cat shelter, Un Chat à la Fois, and rescuer Marie Simard set to work to get him back to health.

‘It broke my heart to see him, so I told her to take the cat to the vet and not even 30 minutes later, he was at our partner clinic,” Simard told Bored Panda.

‘He went into the carrier by himself and once he got to the vet, he was very easy-going, he let the vet do the checkup, the blood test and X-rays, the cat was not feral at all.’

It was initially thought that the cat was lost due to his friendly nature, but he didn’t have a microchip and hadn’t been neutered, so Marie couldn’t be sure if he’d ever been properly looked after.

She said: ‘We assumed he was left behind by irresponsible owners. We have many cats left behind by people—people that cannot afford to pay the vet care. We checked everywhere for a missing cat but we found nothing.’

They called the abandoned cat Aslan after the lion in the Chronicles of Narnia series, but were worried he might not pull through.

‘Aslan had rotten teeth, frostbite, a bite wound (he was bleeding somewhere on his body), fleas, worms, he had diabetes and skin allergy.

‘His blood work was very bad and he had to stay hospitalised a few days so he could be stabilised before going to his foster family.

‘He got surgery for his rotten teeth. He also had issues with his eyes, which were taken care of with surgery.’

Marie believes that if Aslan hadn’t asked for help when he did he might not have made it through the harsh winter, so was overjoyed when he was able to be looked after in a real home.

The big ginger boy would stick his paw out of his cage so people could stroke him, and his sweet nature clearly won over his foster parents, too.

When it was time to go to a ‘forever home’, his foster carers decided that they loved him too much to let him go, and couldn’t bear to take him away from their other rescue cats Cleo and Jasmin (with whom he’d bonded).

Thankfully Aslan is able to live out the rest of years in comfort, and it’s all because he asked for help.

Marie said: ‘Aslan has a special diet due to his diabetes, but he likes food! In fact, his mom needs to closely watch her own plates because Aslan would not hesitate to steal her food. Sometimes, she makes an exception and gives him a treat.

‘Aslan is a very affectionate cat. He forgot his outdoor life, he doesn’t try to go outside. He likes to sleep on her pillow and he likes to cuddle.’

We’re so happy for this sweet lion boy.

Get i touch at [email protected]