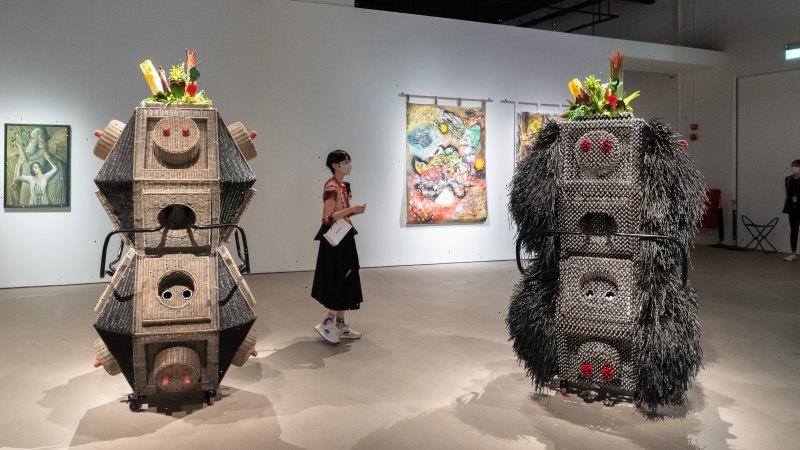 A town called Alice, a fish named Wanda, a hurricane known as Ian, and now, a Biennale that answers to the name, Natasha. I originally thought this was a unique example of Singaporean humour, but because only one of the four curators of the seventh Biennale of Singapore is a local, that thesis is not tenable.

At the previews, those curators – June Yap (Singapore), Ala Younis (Kuwait), Nida Ghouse (India) and Binna Choi (South Korea) – spoke at length about their mysterious name-not-a-theme but didn’t alleviate its eccentricity. The basic expectation was for the general public to respond in a more intimate and personal way to a Biennale with person’s name, rather than the usual cryptic subtitle. 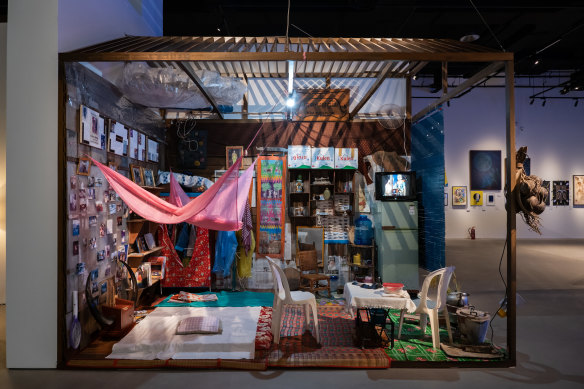 That’s a rather large expectation. The name seems to have acted as a major distraction, as the only thing people keep asking is: “Why’s it called Natasha?” It feels like a puzzle that requires solving before we can appreciate the art. Is it significant that it’s a gendered name of Russian origin? Apparently not, although one may think of Natasha, the heroine of Tolstoy’s War and Peace, and wonder if there’s a buried reference to the war in Ukraine. On a less literary note, in Turkey and elsewhere, a “Natasha” is popular slang for a sex worker. Perhaps the curators are telling us that art today is prostituting itself to wealth and power. Alas, it was ever thus.

If the organisers had wished for a closer engagement with the public, they might have chosen a body of work with more immediate visual appeal. This Natasha is something of a bluestocking, more concerned with intellectual matters than spectacle. She doesn’t seem to care if the public finds her attractive, as she has bigger issues to consider.

With more than 100 artworks spread across a range of venues, there’s plenty to take in. The main exhibition is centred on the three floors of the Singapore Art Museum (SAM), now relocated to a massive warehouse over by the docks at Tanjong Pagar. In addition, there are pieces scattered across islands that most visitors never access: nearby Sentosa, which is really a luxury suburb; along with Lazarus Island and St. Joseph’s Island, which require a short excursion by boat. There are a handful of works placed within housing and shopping complexes in mid-city, and even one installed in the Singapore Flyer, the huge Ferris wheel that takes a half hour to make a full rotation. Further works are being housed in regional libraries.

Realistically, only the most intrepid visitors to Singapore will get beyond the display at SAM. Although the Singapore Flyer and a trip to the islands are great touristy fun, I’m not sure the hard-core audience for contemporary art could be described as a fun-loving crowd. I’ll side with those art snobs, for once, and focus my comments on the main display. 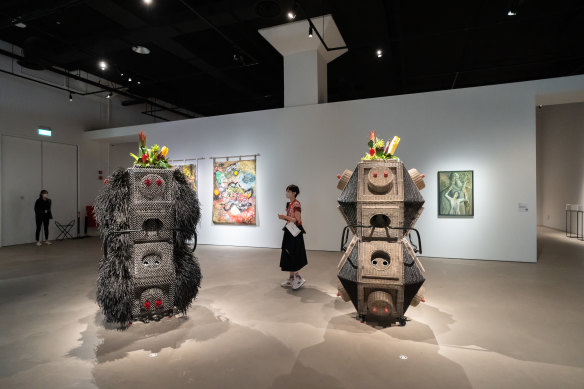 One obvious standout is an installation by Korean artist Haegue Yang, that glories in the title: The Hybrid Intermediates – Flourishing Electrophorus Duo (Sonic Intermediate – hairy Carbonous Dweller and the Randing Intermediate – Furless Uncoloured Dweller). These “dwellers” are two large, segmented totems covered in woven straw and sheets of tiny metal bells, that resemble alien beings or perhaps standing sarcophagi. The figures emit sound, and even have plants growing on top. They owe a debt to both science fiction and shamanism.

Yang’s bizarre, evocative sculptures have made her a familiar presence on the Biennale circuit, and it was no surprise when she was awarded the prestigious Benesse Prize in its third year of association with the Singapore Biennale.

Another impressive, strangely affecting presentation was by Thai artist Araya Rasdjarmrearnsook, who used to specialise in talking to the dead but has now turned her attention towards dogs. Rasdjarmrearnsook’s videos, with accompanying small sculptures and paintings, address the dogs in her household as if they were philosophers pursuing a program for living. We are drawn into this profoundly introspective dog world by the artist’s voiceover, until the line between human and animal disappears.

Rasdjarmrearnsook is a rare example of an artist able to stimulate thoughts and feelings on a deep level. The more conventional approach is to outline a set of “issues” and present them to viewers who enjoy having their own ideas and prejudices confirmed. It’s to the curators’ credit that most of the artists selected for this show tend to work in a way that is more layered and ambiguous, although there are inevitable highs and lows. 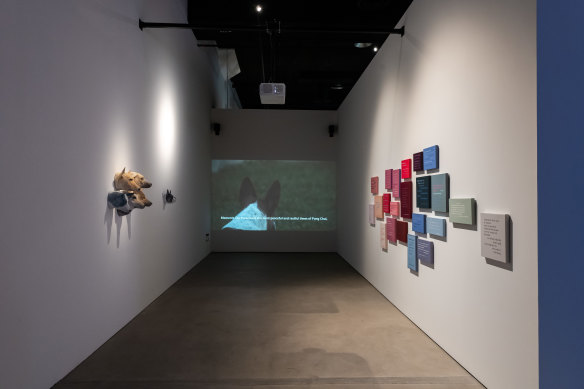 In her installation Hut Tep Soda Chan (Hut of an Angel) Kantha Tith from Cambodia presents a room that is hardly more than a makeshift dwelling from a poor community. What’s intriguing, in a slightly voyeuristic way, is the bric-à-brac found on the walls and the floor, the multitude of images and objects, and even a small TV set showing an old Cambodian movie about an angel who comes to earth and falls in love with a human.

Another clever, if modest work, came from Jordanian artist Raed Ibrahim whose Scripted Tablets harks back to the clay tablets of Sumeria or Mesopotamia that have occupied generations of archaeologists. Ibrahim’s terracotta tablets act like a visual diary or notebook in which he inscribes patterns, signs and symbols that relate to life in the city. Maybe one day in the distant future archaelogists will be retrieving them from the ruins of our own civilisation, which looks to be going the way of old Babylon.

I wish I could feel enthusiastic about one of the Biennale’s pet projects, the Nina Bell F. House Museum, which is as conceptually ambitious as it is visually inert. Situated in different parts of SAM, and other locations, we find tiny houses that relate to nearby racks full of archival documents and joint cooking projects. None of this is apparent at first glance, and for most viewers there won’t be a second.

Of the projects in other locations, Trevor Yeung’s plant exchange, placed in a park attached to a busy apartment complex, is a genuinely sympathetic idea that has already seen a lot of residents bringing their unwanted house plants and occasionally swapping them for other varieties. If the art game doesn’t work out for Trevor he can always open a nursery.

A final piece that should have wide appeal is the installation by Wayne Lim and Soh Kay Min, two young Singaporean artist-designers from a collective named AWKNDAFFR. The duo has wallpapered one of the cabins of the Singapore Flyer with forest motifs and added a jungle-themed video by another artist, Ranu Mukherjee. The game is for viewers to reflect on the natural world then look through the window at the most progressively minded cosmopolis in South-East Asia.

In Singapore this may qualify as an oblique act of social criticism, querying the relentless urban development and social engineering that has made the city both prosperous and stultifying. The past three decades have witnessed a huge growth in the island’s cultural infrastructure but these activities inspire admiration and scepticism in equal parts. It has remained difficult for artists, curators and all creative people, to step outside those structures and be messy and spontaneous. Instead, there’s a tendency towards over-intellectualisation that is also an aspect of Natasha’s personality. She has great moments but needs to be less uptight if she wants to make new friends.

Singapore Biennale 2022: Natasha is at the Singapore Art Museum & other venues until March 19.

To read more from Spectrum, visit our page here.