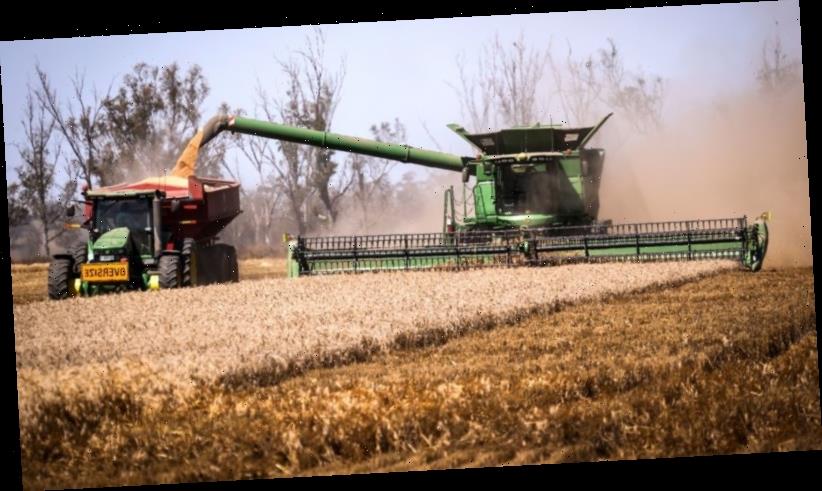 Grain growers along the eastern seaboard reaped record winter crops this season, with timely rain across the grain belt in NSW, Victoria and Queensland after a run of dry years.

GrainCorp's haul of wheat, barley and canola exceeded 13 million tonnes, with many of its sites that receive and store grain setting new records after four or more years of drought. 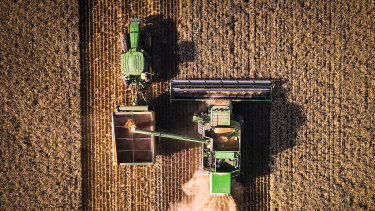 After years of drought in NSW, Queensland and parts of Victoria, farmers are enjoying a record-breaking grains harvest. Credit:David Gray/Bloomberg

This eclipsed the previous record crop of 12.6 million tonnes reported by eastern Australia's dominant bulk grain handler in 2016-17. Since then, the harvest from Queensland, NSW and Victoria has been depressed by the lack of rain.

GrainCorp operations manager Nigel Lotz said the company's receival site at Coonamble, NSW, which had been barely used in recent years, epitomised the reversal in fortunes for farmers. It set a new record of 443,000 tonnes for the site this year, the single biggest haul in the state.

"NSW port facilities didn't have much activity at all last year, but now the ports in NSW and Victoria are booked out for the whole year coming up," Mr Lotz said.

"Last year in north-east Victoria, southern NSW and particularly north-west NSW, the season was very lacklustre. Now, with all the activity during harvest, you could sense the vibrancy in the communities and people had a skip in their step."

The grain harvest is wrapping up in Victoria, also with some record results despite wet weather since December, which can strip quality from the grain and disrupt harvest logistics.

Julia Hausler, a farmer in the northern Wimmera, said timely rain earlier in the year meant her district enjoyed one of its better seasons in recent memory.

"We were on a knife's edge in the Wimmera, Mallee and central Victoria, but we got the rainfall in August and it turned the season around," Ms Hausler said.

Dalby, Queensland farmer and AgForce grains president Brendan Taylor said farmers were at the whim of "storm lotto" this season, with heavy but patchy rain so localised that a boundary fence could mark the difference between delight and desolation.

"There's been a lot of good management by people to get through these tough seasons, but there's also a lot of good luck in being under the rain and if you're not it can be bloody heartbreaking," he said.

Sam Heagney, who farms at Mungindi, Queensland near the NSW border, said he had an average harvest season but "you didn't have to go far to find someone who'd had their best season ever".

"Coming from such a low base, anything seems amazing. All the businesses in towns were so happy, they were busy and there were lots of people around," Mr Heagney said.

"We have been getting a bit of rain, in late December and early January. But the more the better now. It still hasn't been enough to fill the irrigation dams like Copeton and Keepit."

While wheat prices are down $100 on last year's drought-induced highs of about $350 a tonne, Ms Hausler said the current price was a welcome surprise given the large volume of grain that had hit the market.

"It's a relatively good price at the moment, and a rare thing that prices have even trended upwards $21 since December, despite the good harvest."