Anthony Albanese paused on a single word in his campaign speech on Sunday to put as much weight as possible on the essential case for removing Scott Morrison from power at this election.

The Labor leader lingered over the word, the title of the final report of the royal commission into aged care, to tell Australians their prime minister had overseen a broken system and then did nothing to fix the flaws. 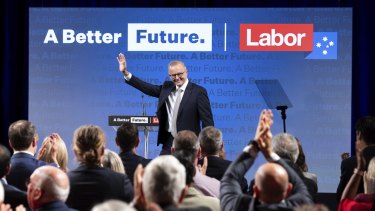 “That’s his way. That’s his character. Whenever Australia needs a solution, he offers only smirk and mirrors.”

Albanese offered a smorgasbord of policy ideas in his campaign speech: a housing plan, action on pay equity for women, a “made in Australia” fund for manufacturing and more subsidies for medicines.

Yet the character assessment of his opponent was fundamental to the Albanese pitch for power.

Time and again, Albanese used his speech to say Morrison did not take responsibility, did not hold a hose, said it was “not my job” and blamed others for failure.

So the Labor proposition to voters is very much about electing someone who promises to do better. It works with the true believers – there were plenty of cheers in the function room in the Optus stadium in Perth on Sunday – but it also has to work with cynical voters who have low expectations of all politicians.

Albanese knows the idea he has to demolish: that voters are better off with the “devil they know” and will therefore keep Morrison rather than switching to Albanese, who they do not know as well.

The Labor leader stumbled over his lines on this key point but still managed to drive home his argument that voters know Morrison has failed them.

The decision to make the choice all about Morrison’s character meant the campaign speech did not offer a comprehensive blueprint for change under a Labor government. While those around Albanese were confident the speech reflected a coherent policy plan, it came across as a selection of new ideas.

But the Labor campaign launch will have done its job if voters get the message that Albanese cares, can be trusted to take responsibility, wants to build things, believes in a “made in Australia” industry policy, can deliver policies that make things cheaper and will find a way to increase wages.