Tobey Maguire, Andrew Garfield, and Tom Holland have all donned the Spider-Man suit, but their characters’ journeys were very different. What happens when you bring those three experiences together? Spider-Man: No Way Home writers Chris McKenna and Erik Sommers aimed to answer that question. In a recent interview, they discussed the film’s epic moments between the three Spider-Men and how their perspectives as Peter Parker differed.

[Spoiler alert: The following story contains some spoilers for Spider-Man: No Way Home.]

Maguire’s Spider-Man trilogy and Garfield’s The Amazing Spider-Man 1 and 2 told different iterations of Spider-Man’s origin story. Both film series depicted the death of Peter Parker’s Uncle Ben and how his death drove Spider-Man to become a vigilante.

Viewers saw both Peter Parker characters grieve, but their long-term futures were unclear. Finally, in No Way Home, fans got to see where that grief took them as they helped Holland’s Peter deal with the loss of Aunt May (Marisa Tomei).

The ‘Spider-Man: No Way Home’ writers wanted Tobey Maguire and Andrew Garfield to have different perspectives

While writing Garfield and Maguire into Spider-Man: No Way Home, McKenna and Sommers had the challenge of deciding where the characters would come from on an emotional level. The writers told the Los Angeles Times that they wanted the two Spider-Men to have “different perspectives” that would each help Holland’s character.

“We wanted to make sure that, first and foremost, they service the story of our Peter Parker, but secondly, we wanted it to feel like when they go home, they’ve learned something too. That this has had an impact on their journey,” Sommers said. “So we had to put our heads together and decide where we think these guys are right now in their lives.”

Thinking back on how Garfield’s Peter grieved after losing Gwen, the writers decided he would have “given in” to his anger. Meanwhile, Maguire’s Peter would have brought himself back to a place of “Zen calm” after his own difficult journey with loss.

“One Peter was still trapped in that darkness, and one made it out, but it wasn’t an easy journey,” McKenna added.

McKenna and Sommers wanted Garfield’s Peter, especially, to take something away from this experience. According to the writers, director Jon Watts had the idea to let Garfield’s Peter save MJ (Zendaya) from her fall, absolving him of his guilt from not saving Gwen.

“Emotionally, we knew that we wanted him to take another step on this journey — that he had to — and that he could only do it with [Holland’s Peter and Maguire’s Peter],” McKenna said. 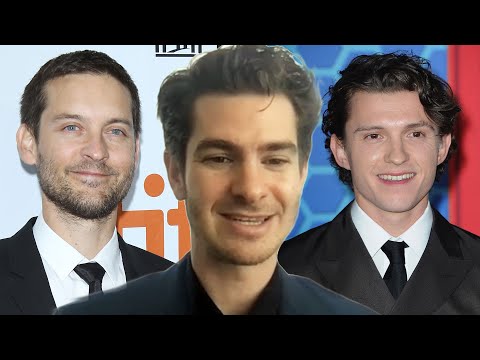 All in all, each Peter ended his journey knowing that he wasn’t alone. Maguire, Garfield, and Holland formed a brotherhood between their characters. Speaking to The Hollywood Reporter, McKenna said that brotherhood dynamic was crucial to each Peter’s healing.

“No one knows the heaven and hell of what it is to be in an experience, quite like your sibling. No one knows what this family is like,” McKenna said. “At least they got a sense of, ‘You’re not alone. There’s a community. You guys have each suffered in your own way.’ And then to get help heal each other.”

Spider-Man: No Way Home is now playing in theaters.