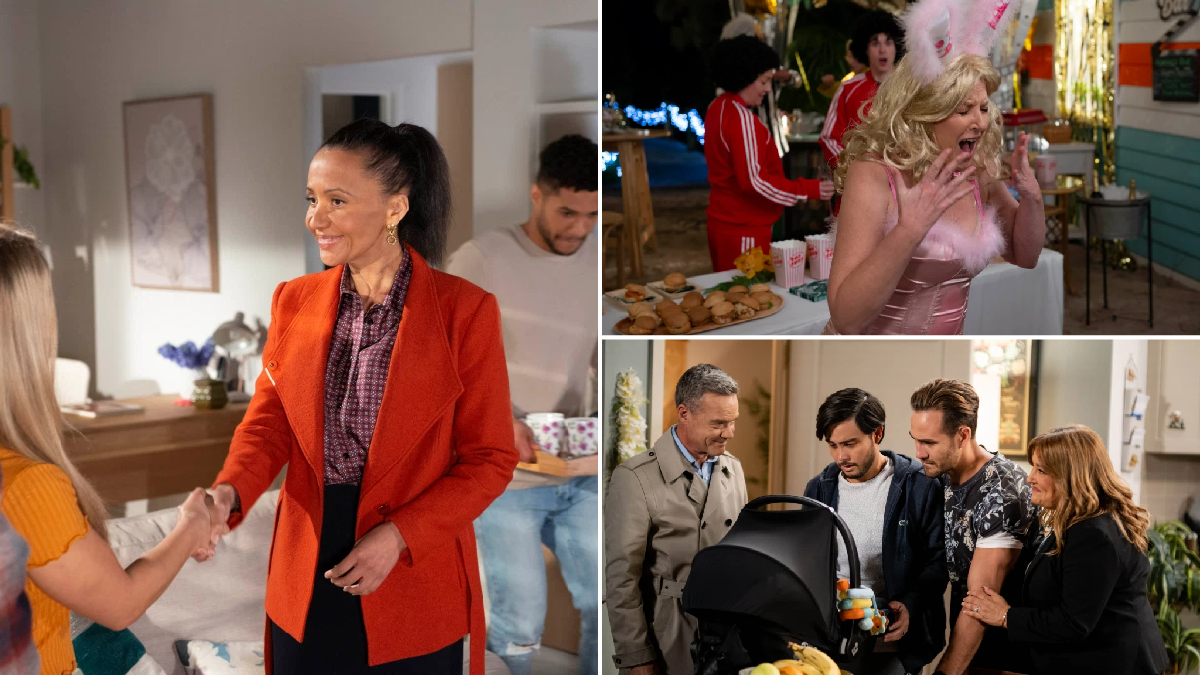 It’s a week of shocks for the Neighbours this week. And not the good kind, like when you discover someone forgot to put the wafer in your Kit Kat so it’s four fingers of solid chocolate. But rather the kind where someone is set to learn their baby isn’t who they think it is. Bad times ahead indeed.

Nicolette (Charlotte Chimes) effectively signs on the dotted line with Paul Robinson’s (Stefan Dennis) unrefusable deal, and he’s naturally smug about it. But he’s met his match in Nic, who has pulled the most incredible fast one.

Sheila Canning (Colette Mann) is another one in for a nasty surprise when she learns the truth about her grandson’s modern relationship. Spoiler: she’s not particularly happy about it. But there’s worse to come for her, so to speak, when she walks in on something she cannot unsee. How will she react?

Toadie (Ryan Moloney) has a heart-in-mouth moment when he realises Melanie’s (Lucinda Cowden) past is catching up with him. Which does he protect, his girlfriend or his reputation?

And Amy (Jacinta Stapleton) has one of those days where she accidentally texts the wrong person and all hell breaks loose.

Here’s what’s ahead in Neighbours.

After discovering Nicolette had secretly given birth, Paul made her an offer she couldn’t refuse – a huge wad of cash in exchange for the baby girl. She hands over the baby girl and a smug Paul returns to Ramsay Street, unaware it’s not actually Nic’s baby girl. Aaron, David and the family have no idea this isn’t baby Isla, but when Jane returns she is suspicious. She doesn’t believe Nic wouldn’t return with her baby and she becomes fearful for her daughter’s safety, hiring her own PI to track her down. Paul gets wind of this and derails Jane’s search plans with a bribe. The PI then gives Jane the wrong information that sets her off on the wrong path. She’s hellbent on finding Nic, will she be the one to uncover the dark truth?

Sheila is struggling with the idea of a polyamorous relationship for Levi – she thinks he deserves better. Her point is proven when she gives herself a fright by walking in on Amy and Ned in the middle of doing it. She feels like it’s showing huge disrespect for her grandson and is akin to cheating, but she can’t change his mind. Sheila throws Levi a birthday BBQ but being Sheila she has a plan up her sleeve – she also invites Ned and Amy to try and make Levi see sense.

Unfortunately, instead he sees red for her meddling and tells her to butt out of his love life.

Harlow gets too big for her boots

Terese tasks Harlow with a little research on Lassiters so that she has a solid presentation for the Quill hotel. But Harlow, being green in the industry and in her role that’s too much for her, goes about it in entirely the wrong way. Chloe spots this and gives her a talking to and it seems something is finally going right for her as Harlow crawls with her tail between her legs to Terese, admitting she was wrong and Chloe was right.

Amy fancies a bit of a fumble with Ned so she books a hotel room for them to have a little private time away from prying eyes. But she makes a schoolboy error when she doesn’t check her ‘To’ field before hitting send on the message – it sends to Levi. She is unaware and somehow the message still reaches Ned’s ears, and she’s about to get a surprise on her doorstep and way more than she bargained for.

Terese is getting pressure from Shay to complete the deal but there’s a spanner in the works in the shape of Paul. Just as Terese is about to cross the Ts and dot the Is, Paul pulls the plug with no explanation. How will Terese explain it to Shay?

Toadie is in a pickle when it comes to Mel – her sordid past which involved an affair with her old boss that ended badly, has come back to bite them as Toadie’s clients have caught wind of it and are deserting him. He is struggling to support his girlfriend while his business and reputation are going under.

Enter Toadie’s ex love interest Rose Walker, who flounces in like his knight in shining armour, which could be a problem for Mel. Toadie tries to reassure Mel that Rose means well, but does Rose have an ulterior motive up her sleeve? He’ll soon find himself having to choose between the two.