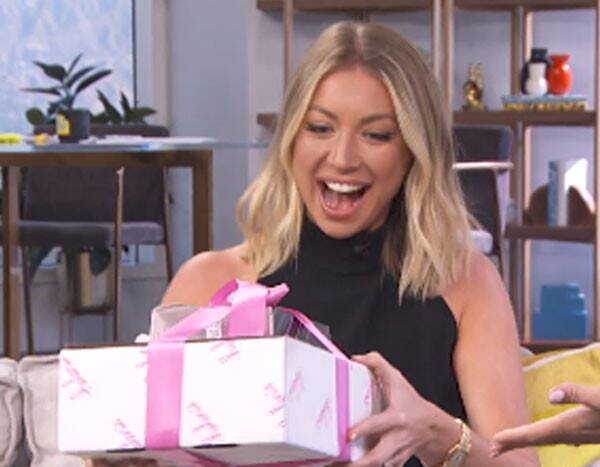 Fans of reality TV, rejoice! Vanderpumps Rules has been nominated for a People’s Choice Award!

The iconic Bravo series following the staff of Lisa Vanerpump‘s restaurant SUR has been one of the most quotable TV shows ever, in large part thanks to none other than Stassi Schroeder.

The Next Level Basic author stopped by E! News’ Daily Pop to talk about her engagement, upcoming wedding and to celebrate the show’s PCAs nomination!

Daily Pop host Carissa Culiner kicked off the interview with the exciting news exclaiming, “We have a big congratulations to give you. Well, for a couple reasons, but the first one is because this morning Vanderpump Rules was nominated for [the] E! People’s Choice Awards!”

Schroeder joked back, “Listen, we were nominated last year, so because you’re telling me right now does that mean we already won?”

Not yet! However, the show very well could win The Reality Show of 2019, but it’s all up to the fan vote. Since the People’s Choice Awards is a show by the people, for the people, you better hobble away to the voting site or onto Twitter to make your voice heard.

Culiner then presented Schroeder with a PCAs gift box, who was thrilled explaining, “I love presents!”

Schroeder later continued, “I’ve lived all of my 20s on Vanderpump Rules. The crew is my family, the cast is my family, and like the viewers are a huge part of my life now…it is what it is.”

Now, those viewers have the chance to thank Schoeder by casting their ballots for the reality star.

Tune into the live show on Nov. 10 to see if Vanderpump Rules walks away with a trophy. And don’t forget to vote for the other 42 categories that cover movies, TV shows, music and all things pop culture!