The country’s leading economists say the government made the right call with its low-spending budget even as figures reveal a surge in tax receipts so far this financial year, but warn a harder look at the finance books will be needed ahead of the next budget in May. 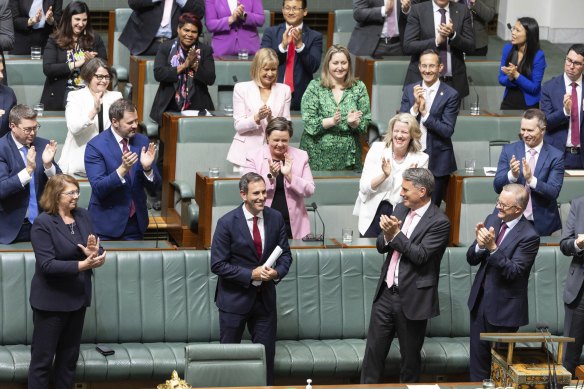 Treasurer Jim Chalmers is congratulated by colleagues after delivering the budget speech on Tuesday.Credit:Alex Ellinghausen

He cautioned that extra revenue flowing into government coffers was largely “temporary”, due to high commodity prices, and said the government would not spend all of it.

“The budget was all about making our economy more resilient and our budget more responsible. It was an important start, we know that we’ve got hard work to do, but the hard work has begun,” Chalmers said on Friday.

Department of Finance data showed the government brought in $56.6 billion in income tax in the three months to September 30 – about $1 billion more than forecast in the Coalition’s March budget. It also reaped nearly $31 billion in company tax revenue, well above the $22.7 billion predicted in March.

The budget deficit is already $15.2 billion in the first quarter, with increased tax revenue and spending changes expected to take it to $36.9 billion over the whole financial year.

“This budget shows remarkable restraint given the large windfall revenue gains presented in this budget, but it was never going to deliver the large sweeping changes that are needed to properly address the dire structural fiscal deficit position,” he said.

“Fiscal policy is like the Titanic – it’s a big ship. If you make sudden cuts, you risk turning too far one way, with no time to get back on the correct path. The government has embarked on a steady course, which is a sensible approach,” she said.

Commonwealth Bank’s head of Australian economics, Gareth Aird, said households were being squeezed on several fronts and the government had another budget in May to make any spending changes.

“There is no need for radical surgery at this juncture,” he said. “The consumer sentiment surveys are concerning. There is no need to further cut spending at this stage as the lagged impact of rate hikes hits home borrowers.”

But EY chief economist Cherelle Murphy said the budget pointed to a further lift in the federal government’s share of total public expenditure over coming years.

She said while a high level of government spending during COVID-19 was appropriate, it was not now.

“The treasurer said he is prepared to make difficult decisions in difficult times, but instead in this budget, we saw that he’d prefer to defer them. The government was simply not brave enough in making the necessary spending cuts we need now,” she said.

“The government has found a number of savings, but the issue isn’t so much about what it should have cut further,” she said. “Rather the government has failed to tackle the structural issues looming over the budget. Fundamental reform is needed, including a systematic approach to evaluating spending programs.”

Macroeconomics Advisory managing director Stephen Anthony said Chalmers had signalled he wanted to consult on the next steps before the May budget.

“Obviously, some mix of tax reforms and spending cuts will be necessary,” he said. “We had all better cross our fingers and hope global events permit the treasurer to stick to his leisurely consultation schedule and don’t force him to act sooner.”