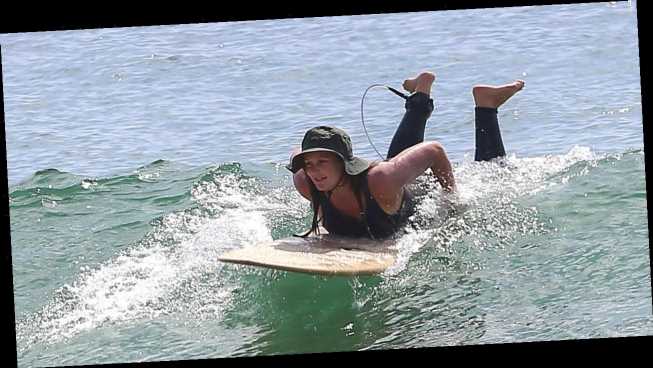 The Gossip Girl alum, 34, was photographed applying sunblock and carrying a surfboard in Malibu on Friday, September 18. The actress wore a black wetsuit and a matching hat while paddling in the waves.

Five days later, the Texas native and Brody, 40, surfed in Malibu again in photos obtained by The Daily Mail.

Their outing came one week after the O.C. alum broke the news that baby No. 2 had arrived. “Since last I played, I have a new kid,” the actor revealed during a September 11 Twitch stream. “I have a boy, and he’s a dream boy.”

He and Meester are also the parents of their 5-year-old daughter, Arlo. While the pair are notoriously private about their family, the Single Parents star opened up exclusively to Us Weekly about her eldest child in September 2019.

“People started telling me before [I had] a kid, ‘You’re going to really love them.’ Then you’re like, ‘Yeah, obviously, I’ll love them,’” Meester explained to Us at the time. “And then you do [have them] and you’re like, ‘Oh. OK. I don’t love anyone else. I just love them. And I don’t even love myself as much as I love them! Not even close.’”

The singer added, “I don’t know, would I kill somebody or die for them? Sure. I would.”

As for Brody, he considers fatherhood to be the “best” thing that’s ever happened to him. “I mean this is cliché — [she’s my] pride and joy,” the California native told GQ of Arlo in August 2019. “It’s very apt. She’s the thing I’m most proud of and gives me the most joy. She’s just so dang awesome. It just gives you a new perspective in the best way — something to focus on that’s greater and more important than yourself. Also that’s 100 percent true and even in another way. She has even become my security blanket for the outside world in terms of ‘I don’t need your approval I have my daughter, f–k you.’”

He and Meester started dating in 2011 after meeting on the set of The Oranges. They got engaged two years later and wed in February 2014 in California.

Keep scrolling to see the two-time parents surfing side by side.