They’re at the top of the list as one of the world’s most famous family’s. Now, after a few years in the spotlight, the D’Amelio’s are ready to introduce who they really are.

With a combined 213.4 million (and growing) TikTok followers and millions more on Instagram, the D’Amelio family stands as one of the most influential family units in the world. Heidi and Marc D’Amelio and their daughters Charli and Dixie have broken barriers since Charli’s first viral video on TikTok in late 2019, and their next venture will be in the form of the long-awaited D’Amelio Show on Hulu. “For a long time, we’ve let everyone else decide who we are without really being able to tell the story from our perspective,” Charli opened up in an EXCLUSIVE interview with HollywoodLife.com. “This show, it’s not only our real life experiences, but it’s the story that we have been wanting to tell everyone for such a long time.”

With scores of comments and judgments made by ‘keyboard warriors’ (trolls), the family has been met with their fair share of people trying to tell their story for them. “We just want people to know us,” Dixie said, while her dad added, “We’re just an average family. Hopefully the show will help other people that not only are dealing with similar things, what we’re dealing with, but also just how social media affects everybody, and the negativity and the positivity, and I think it’s going to help a lot of people.”

Marc admitted that in the early days of filming, Dixie had a pivotal moment during which she “expressed herself in a way that was very emotional and tough for us to watch.” At the same time, that vulnerable scene helped the family welcome the cameras into the most private times. “In that moment, I wasn’t even miked up, but the cameras were filming and I just said ‘Sure, whatever, I just want to talk to my family, but let the cameras come in,’ because deep down, I thought I might want to see it later,” The ‘Psycho’ singer recalled of the scene that will be shown in the series. “That moment really started the storyline of the next couple months of my life.” 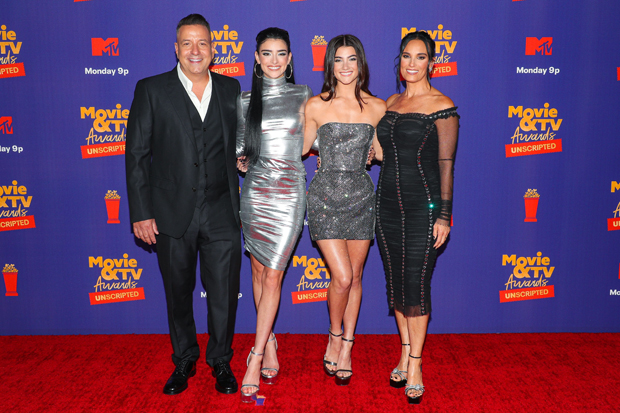 “I think bringing cameras into your house in any way, shape or form is very vulnerable. “Having such a great crew, they really allowed us to be our most vulnerable selves in difficult situations with emotions that can even be hard to kind of admit to yourself.” Charli chimed in. “I really felt like I can say whatever I want, because I know that what I’m feeling is right, and what I’m feeling is true, and I deserve to feel like this, and I don’t have to be worried about what other people are going to say about it.”

The topic of how the family has overcome their subsequent mental health struggles in the last several years in the spotlight is also a major theme of The D’Amelio Show, which premieres on Sept. 3. “We’ve come a long way and it’s taken us all time to get to where we are now, and the way react we react to it now is very different than in the beginning,” Heidi explained of their reaction to negative comments and internet trolls. “Sometimes you just got to take a break, do something different, whether it’s take a nap, or dance or sing or whatever, and just let your brain break from the world for a little bit.”

Marc added, “Everyone that is around us understands that the girls’ mental health is our number one priority and when they come to us, you see in the show, that is real.”

In the end, the family is ready for the world to hit play on their new show and let them speak for themselves. “People say all the time, ‘It’s not going to last forever.’ We know, we know nothing lasts forever. We’ve seen people come and go many times. So we’re going to do everything we can while we have this platform,” Dixie said, while Charli continued, “People have definitely tried to take away what we’ve been able to do, but at the end of the day, this is our lives and it’s amazing. We have so many great opportunities and the show has been such an amazing opportunity. We’re just so happy to really finally be able to share it with everyone else.”

Tune in to The D’Amelio Show on September 3rd on Hulu!